If you like singing karaoke with a whole gang of people, there’s now a special social network for you.

San Francisco-based Smule is announcing today that it is adding group video for its Smule Sing! music social network and its mobile apps such as Sing! Karaoke. The group singing could go a long way toward opening up Smule’s network to people who want to experience the social side of singing.

Smule has more than 25 million music lovers on its network already, sharing their own songs and leaving those songs open for people to add their own virtual duets. 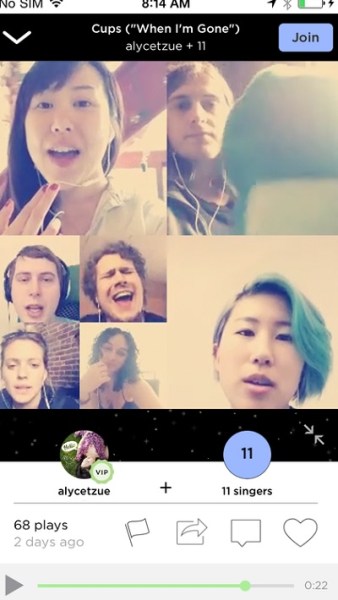 Smule has also had its own breakout success with one amateur. A United Kingdom teen, 18-year-old Tom Bleasby, has been bombarded with record deals after he did a duet on Sing! Karaoke with pop star Jessie J, singing Flashlight” from the Pitch Perfect 2 film. Perhaps Smule’s network might become the new way for musical talent to get discovered, now that American Idol is going to shut down after the next season.

With Group Video, the groups don’t even have to be together. Group Video brings together multiple singers from around the world, “automagically” combining their performances into a group music video in real time. For users, Smule promises the experience will be intuitive and easy to navigate, as proprietary, patent-pending Smule technology powers a sophisticated, layered real-time video rendering service on Smule’s servers, accessed via the cloud.

The underlying technology of Group Video is a combination of real-time audio mix, the song form, and near-instant video rendering. The song form provides the initial guide for the audio and video mix, the underlying song structure and components of each song, including chorus, verse, tempo and more.

Like a “master audio producer,” Smule said, it analyzes the audio signal of every singer and produces the audio mix, using knowledge of the underlying song form to highlight and blend voices together.

Jeff Smith, chief executive of Smule, said the company is seeing more engagement with Sing! via video, as the community loves creating, sharing, and watching performances. He’s excited about seeing hundreds of people join in groups from around the world.

Back in April, Smule raised $38 million to expand its music social network in a round led by Adam Street Partners and existing investors Bessemer Ventures and Shasta Ventures.

Since its founding in 2008, Smule has built what amounts to a worldwide music social network. Its community of 25 million people around the world performs 4 billion songs a year and records 1.5 terabytes of music a day on the company’s network. In 2014, Smule brought in $40 million in revenue, with 350,000 paying subscribers accounting for 85 percent of sales.