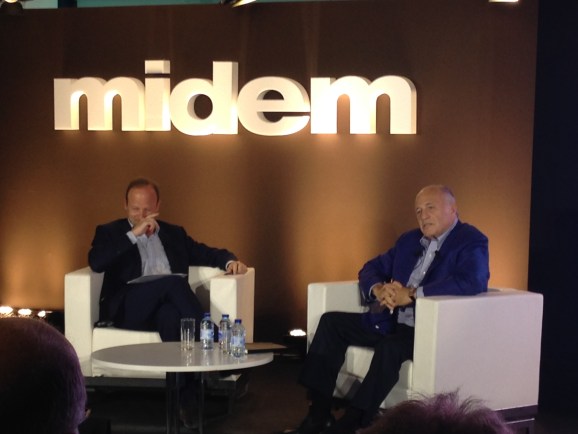 Midem paid for part of Chris O’Brien’s travel to Cannes for the Midem Music Industry Festival where he is participating as a startup competition judge. Our coverage remains objective.

While observers have long expected Apple to unveil such a service at WWDC, Morris’s remarks come from someone whose partnership would be essential to allowing such a service to be launched.

“It’s happening tomorrow,” Morris said during an interview at Midem in Cannes that primarily focused on his storied career in the music industry.

A highlight of that career was a 37-year partnership with iconic producer Jimmy Iovine, who now is running Apple’s music services after the company paid $3 billion to acquire Beats. Underscoring Iovine’s role in the music industry, Morris said he still talks to him twice everyday by phone. Morris said the move by Apple to bring in Iovine was a brilliant one.

Apple has watched in recent years as the digital music download business it pioneered more than a decade ago has slumped and consumers shifted to streaming music. Rumored details about the new Apple Music service have been floating around for months now. The service is expected to be priced around the industry standard of $9.99 per month and include lots of curation by popular DJs and musicians to help consumers discover new music.

While Morris didn’t reveal any details about Apple’s pricing, he emphasized several times that he much prefers paid streaming services to ad-supported ones from a financial perspective. What’s more, he was clearly enthusiastic about the Apple launch, and said he expected it to represent a kind of “tipping point” that would accelerate the shift to streaming.

“What does Apple bring to this?” Morris said. “Well, they’ve got $178 billion dollars in the bank. And they have 800 million credit cards in iTunes. Spotify has never really advertised because it’s never been profitable. My guess is that Apple will promote this like crazy and I think that will have a halo effect on the streaming business.

“A rising tide will lift all boats,” he added. “It’s the beginning of an amazing moment for our industry.”