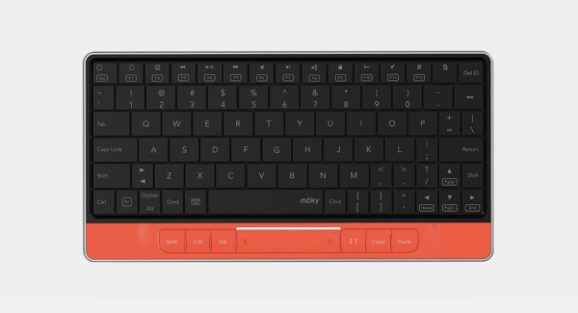 Each week our friends at Backerjack provide an update on a hot crowdfunded tech gadget. This week we look at Moky, which has doubled its funding goal in 10 days.

The keyboard is a popular accessory for mobile devices because it’s often much easier to type with than the tiny one featured on a smartphone or tablet. But they take up a fair amount of space, and their footprints are made even larger by the trackpads that they sometimes bring along with them.

Moky is a twist on the typical mobile keyboard, featuring a large, invisible touchpad that’s controlled by the user’s gestures. An infrared laser sensor module provides a thin optical surface on the keyboard. The device communicates wirelessly with whatever mobile device is used with it via Bluetooth Low Energy 4.0 technology. The keyboard cover, meanwhile, doubles as a portable device stand. Moky costs $149 and will ship in October. Its maker is hoping to raise $30,000 by July 9.

The core technology may have broader potential. Moky seems like a neat accessory for compatible mobile devices, but that means only Android and Windows for now, according to the Indiegogo campaign. Only the keyboard itself is supported on iOS devices as Apple doesn’t support mice or trackpads in that operating system. Synaptics, for one, recently has shown off SmartBar technology that turns a keyboard’s space bar into a pointing device complement and Apple is also rumored to be working on similar technology, perhaps for the Mac.

From the campaign video, it’s not easy to tell just how easy it is to use Moky, but the ability to conserve the space taken up by a trackpad would surely have allure for some users.

For more cool projects, check out this the latest modular, expandable iPhone case, this flexible lightweight camera mount that can wrap around nearly anything, and this retro arcade cabinet for Raspberry Pi makers.