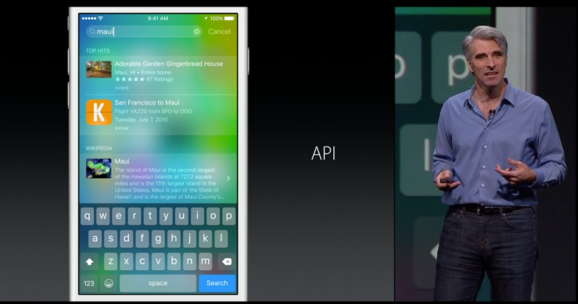 Apple’s next mobile operating system, iOS 9, adds some under-the-hood fixes for stability, performance, and privacy, but it also adds a much smarter personal assistant in Siri.

Apple’s Craig Federighi said that Siri can now learn your habits and surface apps as you need them. If it knows you’re going to work out (from your schedule perhaps), it can surface your music app on the lock screen of the phone.

Siri can now detect that you will be traveling if it sees you have a meeting scheduled, and will automatically deliver traffic information.

Apple has been under pressure to keep its phone sales momentum going by adding a compelling new features and functions, and part of that must come from iOS 9.

Maps. Apple also made some big improvements to its Maps app in iOS 9. It’s added public transportation routes and and arrival times, with a certain amount of indoor mapping.

News app. A new News app takes a more data-driven look at the news you read every day and suggests the stories and publications it thinks you’ll like. The News app will roll out in the United States, the U.K., and Australia.

QuickType. The new OS adds some handy new tricks to QuickType on the iPad. For example, in QuickType, press two fingers down on the screen and the screen becomes a touchpad. A new series of command and app shortcuts has also been added.

Multitasking. Apple also adds multitasking for iPad. iPad users have been complaining that there aren’t more multitasking capabilities, like a split-screen mode, especially on the larger screens of the iPhone 6 Plus and iPads.

A new slide-over panel in Safari brings in a calendar screen or a messaging window.

Most importantly, you can now split the screen so that two apps are running at the same time with full multi-touch control. The new feature is called Split View.

In another new feature, the new OS allows you to overlay a video on another app so that you can keep an eye on a live event you may be watching.

Samsung and other Apple rivals have already added multitasking functionality to their devices, and Apple — in typical “fast follower” style — is likely to do the same.

The upgrade. The size of the iOS 9 download has been reduced from 4.6G to 1.3G, so the upgrade will be easier for users.

HomeKit. The connected home platform HomeKit can now support things like automatic window control, and it adds the ability for the user to control devices in the home using a mobile phone via iCloud.

CarPlay. Apple’s connected car platform added an API for automakers so that they can make their own apps. Users will be able to use the apps without leaving the CarPlay interface in the car.

Apple also added a wireless mode to CarPlay so that users don’t have to plug their phones into the car system with a cable.