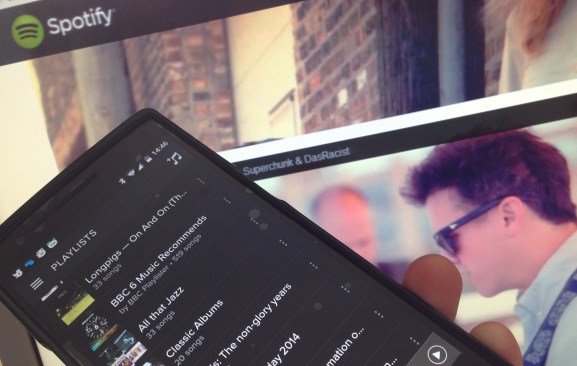 All the chatter this week may have centered on Apple’s announced music-streaming service, but Spotify is upping its game thanks to a fresh $526 million funding round, according to a Wall Street Journal report, valuing the company at $8.53 billion.

This effectively doubles Spotify’s total funding since its inception in 2006, as it has now raised north of $1 billion.

VentureBeat has confirmed with a source that the details of the WSJ story are largely correct, though we’re told that Abu Dhabi is not one of the direct investors. At the time of writing, only one company has confirmed its involvement — Nordic telecom company TeliaSonera, one of the major players in Sweden and Finland, has put in $115 million for a 1.4 percent stake.

TeliaSonera’s participation doesn’t come as a huge surprise. The two companies have ties dating back almost six years, with the mobile operator offering Spotify Premium as part of a bundle as far back as 2009. Alongside the investment, however, TeliaSonera is entering a “strategic partnership” with Spotify, which will see resources pooled to “ignite the joint innovation agenda within areas such as media distribution, customer insights, data analytics and advertising.” A TeliaSonera-Spotify team will be established specifically for this purpose.

The latest round is notably higher than the purported $400 million that was reported back in April when the fund was being established, but with Apple launching its $10/month streaming service at the end of this month, Spotify will need every penny it can get. Today’s round may value Spotify at $8.53 billion, but that is roughly 20 times less than the amount of cash Apple has in its bank. Just think about that.