Chris Moody, Twitter’s vice president of data strategy, had to deliver a major keynote at Cannes Lions today just a week after the company announced that chief executive Dick Costolo would step down. Presenting Twitter’s pitch to one of the world’s largest gathering of advertising and marketing peeps amid questions about the company’s growth and leadership is, well, maybe less than ideal timing.

During his hourlong talk, Moody dove into Twitter’s wealth of data to highlight a common dilemma the company faces. And by implication, he seemed to be trying to shift the mindset of the advertisers and marketers Twitter covets.

Moody spent about 10 minutes strangling a metaphor about the energy created by lightning strikes (fast and sharp, exciting, but dissipates quickly) compared to the sun (far greater, but steady and predictable).

The problem is that apparently, advertisers and marketers get excited about lightning strikes on Twitter, like the Oscars or the Super Bowl.

Or, as tracked in the chart above, the viral explosion about #TheDress. At one point, people were posting as many as 303,000 tweets per hour about the thing. (This is the blue line above.)

But, as Moody noted, over a 30-day period, there were 4.8 million tweets about #TheDress. By comparison, there were 67.6 million tweets just about everyday fashion. (That’s the purple line.) And these tweets come in regular cycles.

“These are predictable,” Moody said. “We know it’s going to happen.”

The issue (reading between the lines) seemed to be that Moody and Twitter want more advertisers to become regular buyers around these predictable moments. Instead, they’re focused on the sexy, high-profile, viral moments.

It’s hard to know just how persuasive that message will be with ad folks gathered in Cannes this week.

It is worth noting that while earlier in the morning a session featuring Snapchat CEO Evan Spiegel was packed, the same auditorium was about one-third empty when Moody’s talk began this afternoon. 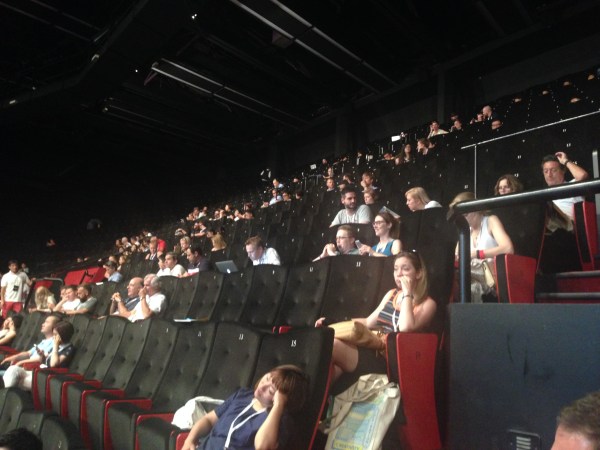 Above: Twitter at Cannes Lions. Where the audience wasn’t.