Mozilla today launched Firefox 39 for Windows, Mac, Linux, and Android. Notable additions to the browser include an option to share Hello URLs via social networks, smoother animation and scrolling on Mac OS X, and the ability to paste Android clipboard content into editable Web content.

Firefox 39 for the desktop is available for download now on Firefox.com, and all existing users should be able to upgrade to it automatically. As always, the Android version is trickling out slowly on Google Play.

The most important addition to Firefox 39, from Mozilla’s point of view anyway, is Firefox Hello URL sharing on social networks. You can now share your Firefox Hello link on Facebook, Twitter, and LinkedIn.

In Firefox 33 beta, Mozilla introduced an experimental WebRTC feature that let users make free voice and video calls without needing to download additional software or plugins, nor create an account. The feature was further improved and launched as part of Firefox 34 (it’s now powered by the OpenTok real-time communications platform from TokBox, owned by Spanish carrier Telefonica). Mozilla calls Firefox Hello “the first global communications system built directly into a browser” and ensures users don’t need to hand over personal information to use it. Because WebRTC is compatible with Chrome and Opera browsers as well, you don’t even need the same software or hardware as the person you want to call. 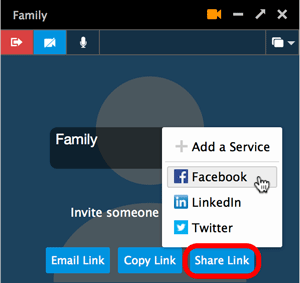 To use the new sharing option, you’ll first have to add your social networks by visiting Services for Firefox, clicking on each service you want to add, and then hitting the Activate Now button. After that, you can share links like so:

When someone clicks the shared link, they’ll see a window where they can “Join the conversation.” Your Firefox Hello button will turn blue when they join.

Next up, Project Silk, which aims to provide smoother scrolling and animation, has arrived on OS X. You can check out the technical details on GitHub, including how Project Silk aligns hardware vsync signals among input, content painting, and composition modules.

If you’re a Web developer, more details are available for you here: Trainspotting: Firefox 39 and Firefox 39 for developers.

Update: Mozilla has delayed Firefox 39 “due to a last-minute stability issue.” We’ll update you know when it’s available.