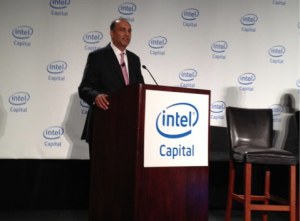 Above: Arvind Sodhani of Intel Capital

Intel announced today that two high-level executives are leaving the company. Renee James, president and the No. 2 executive, announced she will leave the company in January and then search for a CEO position. And Arvind Sodhani, a 34-year company veteran and head of the chip maker’s venture arm Intel Capital, also said he will retire.

The shake-ups are just a few among many departures on the executive team as Intel chief executive Brian Krzanich remakes the management team of the world’s largest chip maker. The departures signal where Krzanich believes the company is doing well and where it needs fresh blood.

Sodhani said he will retire in January and hand the reins of Intel Capital over to Wendell Brooks, who joined Intel Capital last year as head of mergers and acquisitions. Starting in September, they will run the investment arm of Intel jointly until Sodhani leaves. During his tenure, Intel has seen 580 portfolio exits, 211 IPOs, and 369 M&A exits among the companies that Intel invested in. Intel has invested more than $11.5 billion in more than 1,400 companies in 57 countries, and it currently has 400 companies in its portfolio.

James, 51, announced her departure in a memo to Intel employees on Thursday night. She had climbed up the ladder at Intel for many years, and I first met her when she was the technical assistant for Andy Grove. Her job was to make sure his laptop worked right, and that his PowerPoints didn’t inexplicably fail when he was giving speeches. She used that position to absorb Grove’s philosophy and practices for running the giant company. She became president of Intel in May 2013, as Krzanich was announced as CEO.

The change will set off a new succession question for Intel, though Krzanich will be the top boss for the foreseeable future.

Krzanich announced in January that Intel would invest $300 million in making its workforce and the tech industry more diverse. It also announced a $125 million fund to invest in businesses run by women and underrepresented minorities.

At the Intel Capital event, Krzanich noted that it isn’t enough to just hire diverse candidates. He said bigger changes are needed for the whole ecosystem in order to make the industry more diverse. While these executive changes are clearly about the core business and the people running them, it will be interesting how things shake out on topics such as how diverse will Intel’s management team be, and how long before a woman runs a company like Intel.