In May, Pinterest announced a new platform for developers to help them build apps that would “bring Pins to life.” Today, the interest-based social networking company announced the first two services that have integrated with Pinterest’s API: IFTTT and Polyvore.

Pinterest says it has received many submissions for ideas on how to integrate its API with third-party services, ranging from helping people plan their travels to designing their homes and gardens to even ordering the ingredients on recipe Pins. IFTTT, a web-based conditional platform, and Polyvore, the fashion site, are only the first, as Pinterest tells us additional integrations and apps will start rolling out after today.

The opening up of Pinterest’s API is certainly welcomed by developers perhaps eager to tap into the 50 billion items pinned to date. But let’s not forget that the company faces stiff competition to win over the hearts and minds of developers who have many other choices for integration, such as Facebook, LinkedIn, and Twitter. 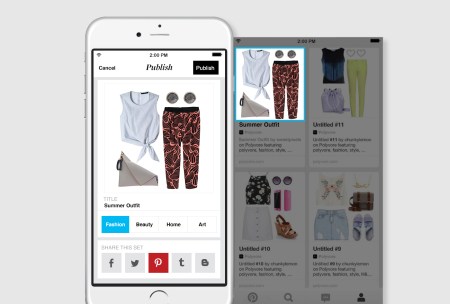 Here’s how the Pinterest integrations will work: with Polyvore, users will now be able to easily save their items — fashion, beauty, and home decor collections — to Pinterest. This can be done on an iPhone, iPad, or desktop.

With IFTTT, anyone can connect their Pinterest account with hundreds of products and devices through the Pinterest channel. This also means users can save Pins to boards with a specific set action on third-party apps, such as upvoting a Reddit post, favoriting an Etsy item, or simply liking an Instagram photo.

So why these two services? It seems these are the ones that have resonated well with Pinterest’s audience and proven good use cases. Shares to Pinterest boards are said to have spiked 132 percent with Polyvore’s integration (the specific number remains unknown) and there are already more than 20 Pinterest recipes on IFTTT that are now available.

If you’re a third-party developer interested in integrating with Pinterest, the company says it’s happy to chat. You can submit your app ideas to them through its developer program website, but make sure that you read Pinterest’s guidelines and policies first.

But while we’re giving up our data to these integrations, what kind of permissions are given? Here’s a screenshot of what a typical user would see when they connect their Pinterest accounts with Polyvore, IFTTT, or any future third-party service: 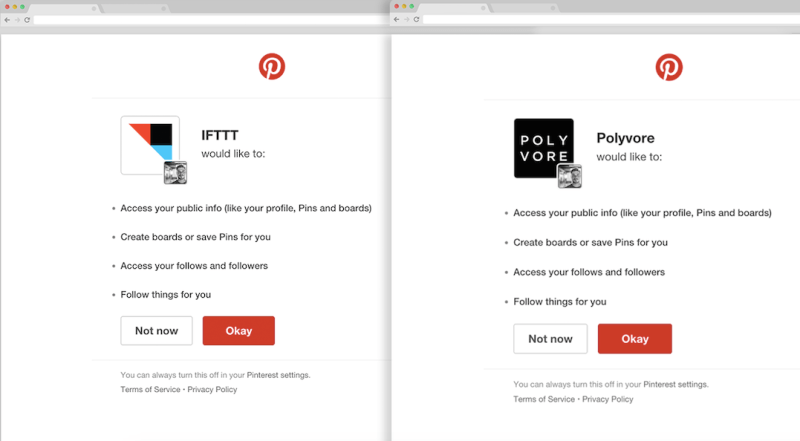 As you can see, the workflow has striking similarities to something one might see when authenticating third-party sites with Facebook data. The dialogue box informs you that it will access your public information, enable the creation of boards or save Pins for you, access your follows and followers, and follow things for you. As is prudent practice, if you want to shut off access to any third-party site, simply go into settings in Pinterest and disable the connection.

It’s unknown right now what other integrations will be supported, but it’s probably safe to say that in the near future, Pinterest could further enhance its advertising efforts with Promoted Pins and its ads API by using user data derived from these third-party sites. So when you go to Polyvore, you may see the latest summer outfit that you’ve been querying on the social network can be found on that very site.

Or perhaps what’s going to be displayed on Pinterest will be outfits specifically from Polyvore because the system knows your account is connected. It can then leverage not only Related Pins, thanks to its deep learning, but also its Buyable Pins to help you quickly purchase the items without leaving the site to go to Polyvore. The same scenario might be possible through IFTTT, where the content is based on whatever channels and connections you’ve made.

The integrations with Polyvore and IFTTT are clearly just the beginning. We’ll have to see what additional integrations Pinterest will support next.