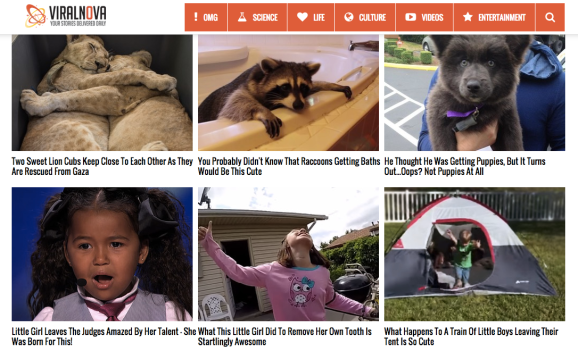 Sources close to the matter say Zealot Networks ViralNova was acquired for $100 million in stock and cash.

ViralNova is a hub for videos with clickable headlines like “This Hamster Just Threw The Greatest 4th Of July Party, And None Of Us Were Invited!” and “They Were All Excited About Seeing Dolphins While Boating, Until This Happened….” Founded in 2013, the site now garners over 100 million views every month for its juicy content.

That’s just the kind of entertainment that Zealot Networks founder Danny Zappin is trying to bring to his fledgling digital media company. He says he’s interested in content that attracts millennials who are moving away from traditional television — an audience he’s courted before.

Zealot Networks is the followup to Zappin’s last media property, Maker Studios, which created and managed a variety of YouTube shows and channels. The video network was generating 5.5 billion monthly views around the time it sold to Disney for nearly a billion dollars in 2014.

Though Zealot has yet to put out any content of its own, the company has been busy acquiring talent ahead of its launch. Since emerging last year, Zealot has bought 15 companies, including a content creation studio, a talent agency, a small record label, a music video production studio, and three creative marketing agencies. Most recently Zealot picked up Northside Media Group, best known among Brooklynites for producing L Magazine and Brooklyn Magazine. Northside also hosts cultural events — a keen area of interest for Zealot.

Zappin says he doesn’t just want Zealot to make digital content, he wants the company to host events and offer other off-screen opportunities for brands to put their name on. Though Zealot’s content strategy isn’t clear yet, its plans for advertisers are less ambiguous. Zappin says he’s focused on creating a tailored experience for brands by hiring and partnering with cultural tastemakers who can create content and experiences that advertisers will want to associate with.

The strategy sounds a lot like that of Vice Media, which has grown from a free alternative magazine into a bustling media giant. Vice has taken a two-pronged approach by investing heavily in video content and creating diverse experiences for brands. The company has its own creative advertising agency and allows brands to engage with its audience through banner ads, events, sponsored content, and custom advertising campaigns.

When asked if Zealot is taking a similar approach to advertising that Vice Media has taken, Zappin said, “There are some similarities and there are some differences,” without going into further detail.

One difference at least is its content style: While both media properties are squarely focused on attracting millennials, they take different approaches. Where Vice has expanded deeply into journalism, Zealot is much more entertainment and lifestyle based. Already the company has a gadget review site, a TV-Guide style publication devoted to covering YouTube stars, and a site with do-it-yourself projects.

Zealot Networks has taken in $30 million in funding, though the company is already reporting a profit. The ViralNova acquisition will no doubt help to draw in more advertising revenue.

Correction: An earlier version of this article referred to Zealot Networks founder Danny Zappin as Danny Zeppin. The article has been updated to reflect the correct spelling of his name.