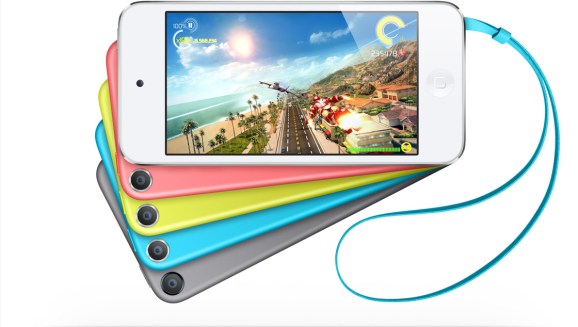 Apple today upgraded its line of iPod music players with a host of new features, colors, and models, though the iPod Touch was the main focus for the refresh.

The new iPod Touch has a faster A8 processor, similar to what’s used in the iPhone 6, and sports an 8-megapixel “iSight” camera. This represents the first major upgrade for the iPod Touch since 2012.

Additionally, the iPod Touch, Shuffle and Nano are all now available in gold, pink, and blue, as well as silver, red, and gray.

In terms of pricing, the new iPod Touch starts at $199 (16GB model), $249 (32GB model), and $299 (64GB model). However, there is also an all-new 128GB model for $399. With such a gargantuan amount of storage, who says the future of music is all about streaming? Well, Apple actually — the new iPod Touch also integrates with Apple’s new subscription music service, Apple Music, including its (free) Beats 1 radio station.

The company hopes to continue selling the freestanding players even as they’ve been overshadowed and outsold by smartphones. The upgrade comes as a surprise to many, as iPods have been losing visibility in Apple’s product line. The device family used to be a main product category on Apple’s website, but it’s now pretty hidden on the site.

Apple reported sales of just 2.6 million iPods in the final quarter of 2014, earning the company $410 million. That’s just a tiny drop in the bucket of Apple’s total revenues for the quarter — $42.1 billion. The majority of those profits came from iPhone sales.