With Apple investing more in its mapping technology, Google continuing to enhance its map-based apps, and Nokia attracting major companies with the proposition of acquiring Here, it’s clear that digital maps play a key part in our digital lives. 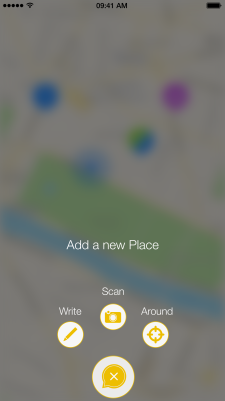 With that in mind, Mapstr is looking to capitalize on the existing utility of maps by making them even more useful. The French startup officially launches its iPhone app this week, after a few months as a public beta product. It offers an easy way to bookmark all your favorite places around the world, from parks and museums to relatives’ houses and pubs.

It’s worth noting here that Google Maps already has a built-in bookmarking feature that lets you save places to your Google account. But Mapstr has been built specifically for this purpose, and brings new features to the mix.

You can search for places based on your current location, search by name or address, navigate to a specific point on a map, or even snap a photo of an address — Mapstr uses optical character recognition (OCR) to identify the address and let you save it. 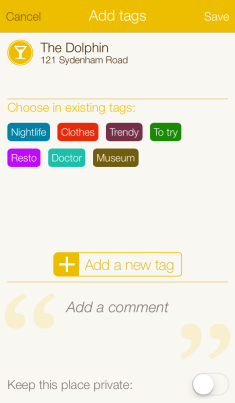 Moreover, Mapstr is all about organization. When you save a place to your account, you can add tags such as “parks” or “bars,” and even add comments — this could be useful to remind you why you saved a place.

One of Mapstr’s key selling points is that it isn’t bloated with features — it doesn’t try to be a social network, though, with the latest version to hit the App Store, there is a social element to it. You can share your favorite places with friends, which is a genuinely useful feature.

Also, there’s a danger with apps such as this that they try to second-guess places you might like. Mapstr doesn’t try to be a recommendation engine — it’s all about letting you remember those little places that you loved at the time, though you could easily forget where they are or why you liked them.

Based out of Paris, with three employes working behind the scenes, Mapstr is close to finalizing a pre-seed round with 10 angel investors on board. Having investors in the mix, however, will obviously expedite the need to start monetizing — so how can an app such as this make cash without ruining the experience with ads or “promoted” places?

The most obvious route would be to go freemium — charge for add-on “premium” features. And we’re told that this is the most likely option for the startup when it decides to start making money. A version for Android and the Web is also currently in the works, and should launch later this year.

Mapstr isn’t the first company to create such an app — Pin Drop launched in the U.S. App Store last year, and it was a very similar proposition. But that was shuttered due to lack of funding, and had a U.K.-based team hired by the mighty Apple. Then there’s Citymaps, which offers similar functionality, but has a slew of extra features that make it more of a social network.

By focusing purely on bookmarking, Mapstr could find some fans.