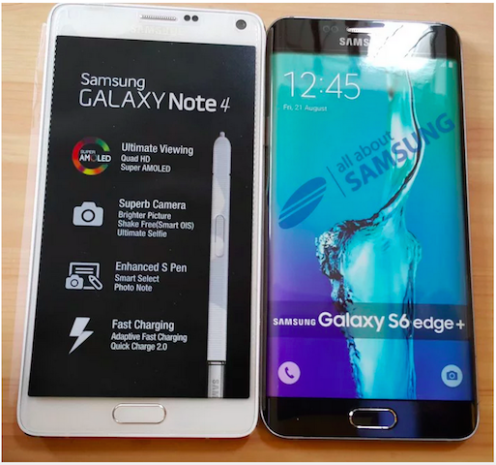 Image Credit: All About Samsung

All About Samsung has released photos purporting to show a “dummy” store display unit of Samsung’s Galaxy S6 Edge+, the super-sized version of its flagship curved smartphone.

Specs are currently unclear, but the size appears on par with the Note 4 — only with no stylus, removable battery, or SD card. Currently, the rumor is that it could sport 3GB of RAM and the same eight-core Exynos 7420 chip as the regular S6 Edge. The Edge+ is also expected to pack a 2560 x 1440 Super AMOLED display in (perhaps) 5.7 giant inches.

These specs will make the Edge+ basically a larger version of the existing phone. It could be a challenger to the iPhone 6 Plus and the forthcoming 6S.

FCC documents suggest the phablet is being prepared for an imminent U.S. release. Meanwhile, other outlets are reporting that the device will launch on August 12 and will begin shipping that month on the 21st.