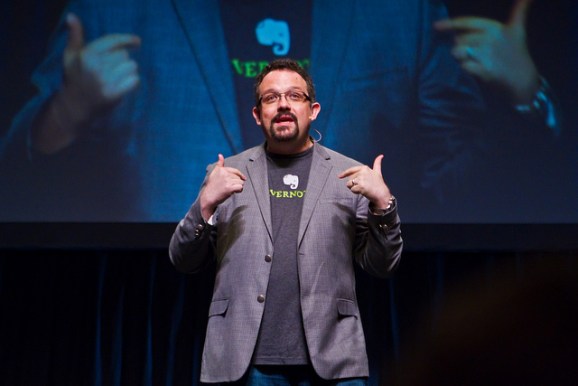 Notetaking app company Evernote today announced that it has hired Chris O’Neill, previously an executive at Google, as its new chief executive. Phil Libin, cofounder and until now the company’s CEO, is stepping down from the position and becoming executive chairman.

“[O’Neill] believes in what we’ve built and has the leadership experience to bring Evernote to all the people and companies that are sick and tired of outdated tools,” Libin wrote in a blog post on the news. “Chris can help us achieve Evernote’s potential, so we can help billions of people achieve theirs. It’s what he does, and it’s exactly what we need.”

At Google, O’Neill worked on Google X and was previously managing director of Google Canada. Earlier, he was head of retail for the tech giant.

Evernote now has 150 million users, Libin wrote. That’s up from the “more than 100 million users” figure Evernote reported in November, when it disclosed a $20 million investment from Japanese media company Nikkei.

The Evernote service launched in 2008. Competitive services include Microsoft OneNote.