A day after launching Chrome 44 for desktop, Google has released Chrome 44 for iOS with two big new features: horizontal swipe for navigation and Physical Web support. You can download the new version now directly from Apple’s App Store.

In November, Google shared that Chrome for mobile had some 400 million active users. The breakdown for Android versus iOS isn’t known, though it’s safe to say Chrome’s use on the latter is not insignificant.

Now, instead of digging through menus and buttons, Chrome for iOS lets you go back by swiping right (from the left side of the screen to the right side) while the forward function can be achieved by swiping left (vice versa). This doesn’t work if, while you’re browsing, you’re tapping links that open up new tabs: This is only for pages you open in the same tab. 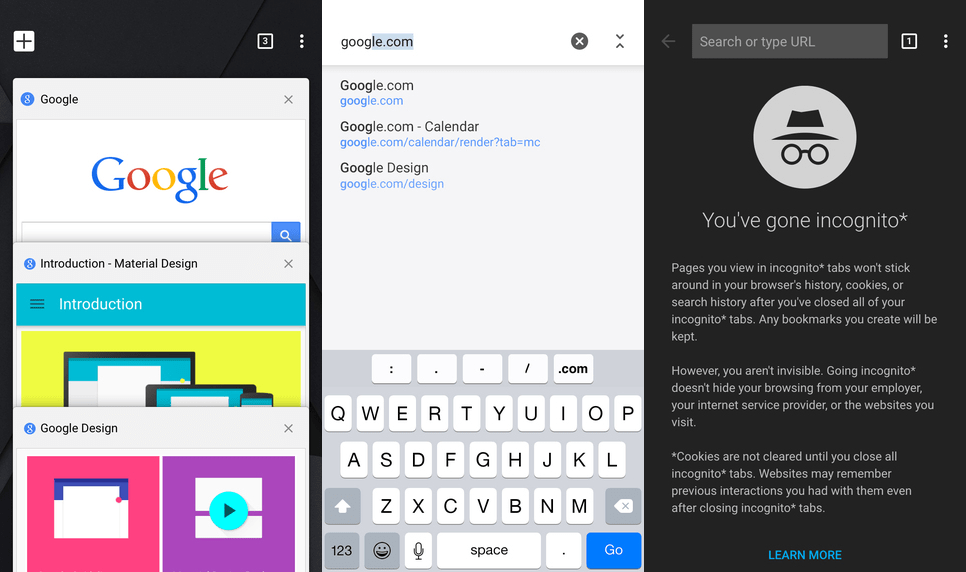 Chrome users, both on Android and iOS, have been asking for this addition long before the browser had any significant market share on mobile. It’s one of those neat features that some mobile browsers have implemented very well and enthusiasts absolutely love. It’s discoverable, it’s fast, and it doesn’t take up any space in the user interface (very important for browsers, especially on a mobile screen).

In addition to the usual “stability improvements and bug fixes” note that is listed for every changelog, Google said version 44.0.2403.65 includes “Support for accessing Physical Web content from the Today view.” Google’s Physical Web is an open source project aiming to build a protocol that allows smart devices (parking meters, bus stops, stadiums, etc.) to communicate directly with a smartphone without the user having to download an app.

In this case, Physical Web devices can now prompt iOS users in the Today view, which was only released in April with Chrome 42 for iOS. The feature means users can open a new tab or do a voice search right from the Notification Center.

“The new Chrome for iOS is an early exploration in enabling users to access the Physical Web in their day-to-day mobile experiences,” said Jake Leichtling, a Google Physical Web Explorer. “As the ecosystem grows, we’ll continue to explore new ways to bring the Physical Web to users’ fingertips.”

Chrome 44 for iOS lets you use the Today view to access an on-demand list of web content that is relevant to your surroundings. You have to first enable the Physical Web, but after that, the Chrome widget scans for broadcasted URLs and displays results using estimated proximity of beacons to rank content.

If the word “beacons” made you perk up, that’s because this is indeed part of Google’s unveiling last week of Eddystone, a new open format for Bluetooth low-energy beacons to communicate with people’s devices. In Chrome for iOS, the Physical Web displays content broadcasted with Eddystone-URL, the beacon frame type designed to convey compressed URLs.

Developers can add content to the Physical Web by configuring a beacon that supports Eddystone-URL to transmit any URL they want. More information is available at the Physical Web Cookbook and on GitHub.

These features are arriving in iOS before Android. Google will likely release Chrome 44 for Android on Google Play in the next few days, though it’s not clear if it will get these two new additions.