As many as two-thirds of Netflix users are sharing their passwords and account details with other people, according to research from GlobalWebIndex (GWI). 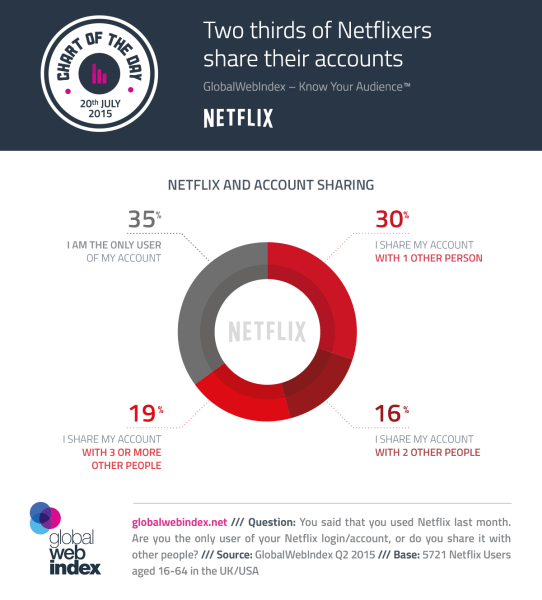 This study comes a few weeks after research from Parks Associates suggested that credential-sharing will cost the video-streaming service industry $500 million in direct revenues globally in 2015.

In Parks’ The Cost of Piracy report, figures show that six percent of U.S. broadband households use an over-the-top (OTT) video service that is paid by someone NOT living in the house.

Above: Age-groups for password-sharing

Delving deeper into the demographics reveals that the younger the OTT service user, the more likely they would be using someone else’s credentials.

While this latest study by GWI offers an interesting additional perspective on the password-sharing “problem” faced by the likes of Netflix, it doesn’t tell the full story.

Indeed, the question respondents were asked was:

“You said that you used Netflix last month. Are you the only user of your Netflix login/account, or do you share it with other people?”

There is no mention here of whether the credentials are being shared with people not living in the same household. And it doesn’t address whether the users are on a “multi-screen” subscription plan.

Netflix actively encourages multiple users of the same account with its “Standard” and “Premium” price plans. Those on the $8/month “Basic” plan can only watch on one screen at any given time, while those on the $9 and $12 plans can simultaneously watch 2 and 4 screens respectively.

Netflix doesn’t brand these as “Family Plans,” but it’s clear that this is its intention. Such pricing structures are typically aimed at those living in the same household, similar to what Spotify offers with its music-streaming plans.

However, Netflix doesn’t expressly prohibit sharing accounts with those outside the household. In its Terms of Use, it says:

On Netflix, four friends could potentially club together for the $12 plan and save themselves $5 a month each compared to what it would cost if they each signed up to a Basic plan. Plus, they have the added benefit of being able to watch content in HD, which isn’t available to Basic users.

While some “single screen” subscribers may well share their account with others, it likely isn’t a rampant problem, given that the account owner would be precluded from using it if their friend across town is on a Breaking Bad binge.

With 65 million subscribers globally — two-thirds of whom are based in the U.S. — it’s easy to see how Netflix could be losing a lot of revenue by letting users pool their funds and share an account. But the video-streaming landscape is increasingly competitive, so the attitude so far seems to be more about encouraging people to use the service, with the hope they will eventually sign up to have full control over their own account.

In an interview last year, HBO CEO Richard Plepler seemingly emulated Netflix’s stance when he stated that he didn’t care about HBO Go password-sharing, saying that it had no effect on the business.

With Netflix bumping its subscriber base by 3.3 million in the last quarter — a record for the company — it’s seemingly laser-focused on producing quality, original content to ensure that these numbers remain on an upwards trajectory.

But using the figures provided by GWI, it’s worth taking a speculative look at what Netflix’s numbers could be if everyone who uses someone else’s account had an account of their own.

This would mean that there are at least 77 million people out there watching Netflix without an account of their own. Many of these will no doubt be children, or represent part of a household “family” plan. But even if a fraction of these are taking advantage of Netflix’s setup and were somehow “forced” to sign up themselves, this would serve as a huge cash influx and subscriber boost for the company. If a million of these people paid the $96-a-year subscription fee, that would equate to $96 million extra in revenue. If 10 million did, that would be close to $1 billion.

This is all purely academic, of course. But it helps give some perspective to what Netflix is missing out on through shared accounts.