Apple may still own the smartphone throne in the U.S., but Samsung continues to dominate the worldwide market. In Q2 2015, the South Korean company shipped more smartphones than any other company. That said, it was also the only one out of the top five to see a decline in volume year-over-year.

Smartphone vendors shipped a total of 337.2 million smartphones worldwide last quarter. Not only is this figure up 11.6 percent from the 302.1 million units in Q2 2014, it’s the second highest quarterly total on record. Smartphones accounted for 72.6 percent of all mobile phone shipments in Q2 2015, which slipped slightly to 464.6 million units, down 0.4 percent year-over-year from 466.3 million units.

The latest quarterly figures come from IDC, which summarized its findings in the following chart: 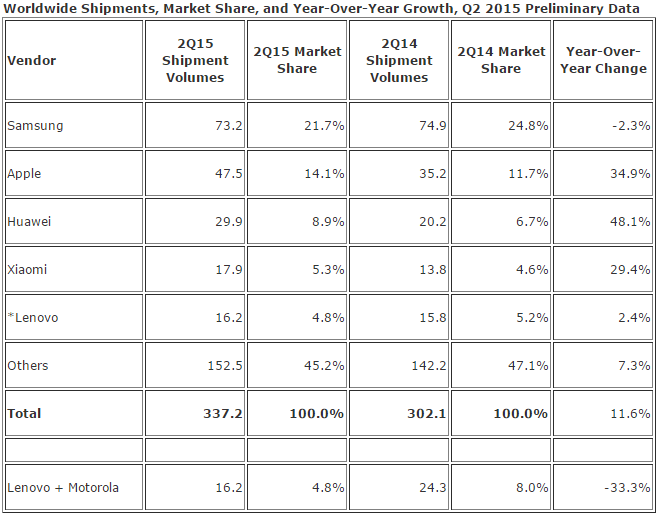 As you can see above, Samsung’s market share decreased by 3.1 percentage points (from 24.8 percent to 21.7 percent). That’s still a fifth of the market, but just a few years ago Samsung controlled one third.

IDC attributes Samsung’s losses to limited supply of the new Galaxy S6 Edge, meaning the company couldn’t keep up with demand for its new curved handset. That said, older Galaxy models “sold briskly thanks to deep discounts and promotions throughout the quarter.”

Apple managed to gain 2.4 points (to 14.1 percent), after shipping 47.5 million iPhones. The larger-screened iPhones and the rapid expansion of 4G networks in China continued to drive momentum, according to IDC.

Huawei grabbed 2.1 points (to 8.9 percent), Xiaomi increased by 0.7 points (to 5.3 percent), and Lenovo slipped 0.4 points (to 4.8 percent). While the Android and iOS duopoly doesn’t look like it’s going away anytime soon, the Samsung-Apple duopoly is slowly eroding.

Put another way, the Chinese trio accounted for 19 percent of the pie. That’s more than Apple, and very close to Samsung. Just last year, their combined share was still well behind Apple.

The bigger question now is whether Samsung can maintain its lead. If not, will Apple be the one to topple it, or will one of the three Chinese smartphone makers take the crown?

Huawei has strong European sales as well as domestic sales, and is starting to make moves in the U.S.
Xiaomi is also finding success in its home country, India, and Southeast Asia, with an eye on Brazil. Lenovo is seeing strong competition at home, doing well in India, and, thanks to its Motorola brand, maintaining a presence in the Americas and Europe.

“While much of the attention is being paid to Apple and Samsung in the top tier, the smartphone market in fact continues to diversify as more entrants hit this increasingly competitive market,” IDC senior research manager Melissa Chau said in a statement. “While the Chinese players are clearly making gains this quarter, every quarter sees new brands joining the market. IDC now tracks over 200 different smartphone brands globally, many of them focused on entry level and mid-range models, and most with a regional or even single-country focus.”