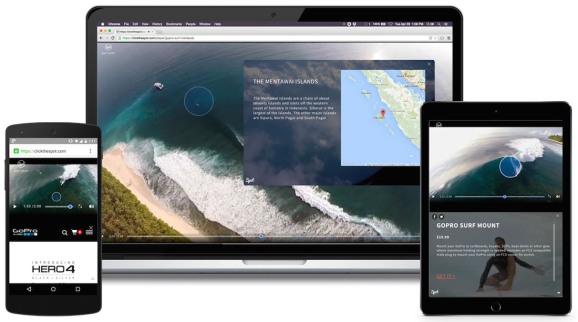 The several incarnations of Spotful.

Suppose you could combine the involvement of a videoclip with the functions of an app.

You would have Spotful, a new video platform from the Montreal-based startup of the same name. It has been generating revenue in its home country since its introduction in Canada three months ago, and it will launch in the U.S. on August 10.

The platform, in development for the past ten months, offers drag-and-drop web-based tools for creating videos that show apps like Google Maps, Twitter, or Eventbrite working in an overlay, on top of the video.

The user sees a regular video playing, and, at times, a small white circle appears. Click on the circle and you might find a usable Google Map in a smaller overlaid window, providing map functionality about the location shown.

Other circles might allow you to tweet this video, share it through your Facebook account, book a meeting via Eventbrite, see background textual info from Wikipedia, fill out a contact form, or even buy the product being shown through an ecommerce platform. When a video is shared, the recipient is linked to the top of the video, not to where the share occurred.

The circle is just the default indication of a hotspot. The interactive author could also designate a beer can in a shot, for instance, as the hotspot.

The central idea is to enable product buying, more info, or other functions without leaving the video experience.

The platform’s multi-user video editor offers a list of apps that are integrated. Currently, CEO and founder Andrew Murray told me, the library has about 20 apps, including Facebook, Twitter, Instagram, Eventbrite, and Kickstarter. The company also has arrangements with Shopify so that, he said, you could “bring an entire store into a window.”

Spotful runs in a browser for Macs, PCs, tablets, and Android devices. For iOS, it runs inside Spotful’s app. On mobile devices, the overlays run at the bottom of the screen. The videos can be Flash or HTML5 and are generally hosted on YouTube, Vimeo, or Brightcove.

VB just released Social media management: Tools, tactics … and how to win
$299 on VB Insight, or free with your martech subscription

The platform was originally developed to provide storytelling for gallery browsing in Halifax. A video shot of a painting on a wall, for instance, could lead to background info on that painting, right in the video.

The format expanded to other industries, with apps as well as info available in the overlays.

“Interactive video [hasn’t] worked as a conversion tool,” Murray said. A click on a Ticketmaster link in a music video, for instance, might pause the video and lead the user outside the experience.

“It’s a huge interruption,” he noted, compared to Spotful’s intention to keep the user within the video.

There are tons of interactive video solutions, but they emphasize simple hotspot links, textual additions, or choose-your-story interactions.

Murray pointed to WireWax as a key competitor, although he noted it is designed for enterprise use and employs customized functions.

“We’re the only people who support third-party streaming video, an app ecosystem, and are 100 percent self-serve,” he said.

The base product is available for free, with paid levels for premium and enterprise features. The platform was developed through the Montreal accelerator FounderFuel, and has received a seed round of $550,000 in investment.

But, Murray said, the company hasn’t used much of its seed funding yet, as it has nearly two dozen paying clients in the U.S., Canada, and Japan.