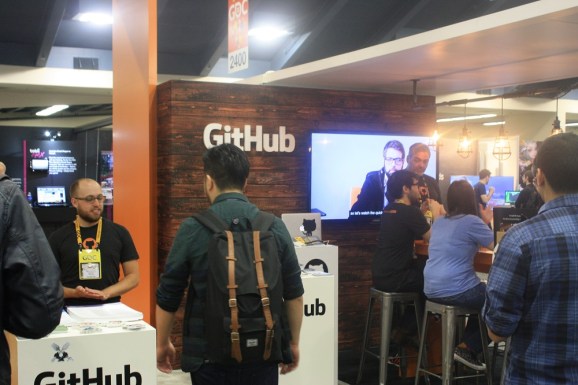 GitHub went with a classy wood accent for its GDC 2015 booth.

A spokeswoman confirmed the details to VentureBeat today after the Wall Street Journal reported the funding. The new funding gives the company a valuation of about $2 billion, the Journal reported. The news follows a report last month that GitHub was raising $200 million in a new round.

San Francisco-based GitHub, which started in 2008, now has around 320 employees and more than 10 million users, up from 1.7 million in 2012. And Chris Wanstrath, a cofounder of the company and its chief executive, believes the user base will keep right on growing.

“I feel like the market is growing faster than we are at this point, to be honest,” he told VentureBeat in an interview today. “It’s a really exciting opportunity.”

GitHub has more than 25 million repositories of code at this point, up from 10 million in January 2014, Wanstrath said.

Earlier this month, GitLab, a startup with software for hosting Git repositories to collaborate on code, announced a $1.5 million seed round. GitHub is considerably more popular among people who work on open source projects, as well as corporate software projects, but GitLab’s software is available under an open-source license while GitHub’s currently isn’t.

“We definitely would love to push integrations for Amazon and Google,” Wanstrath said.

GitHub itself sells GitHub Enterprise for companies to deploy in their own on-premises data centers or on top of Amazon or Microsoft clouds. GitHub now has its own enterprise sales team to increase adoption of these tools, according to Wanstrath.

GitHub has taken steps to support collaboration in data science, but more generally, Wanstrath thinks the company can continue to expand by focusing on people who write software, even as the definition of the word “developer” continues to grow.

“Right now it’s a crazy time to be in software, because so many people want to write code,” he said.