“What we think is going to happen, or what we’ve observed happening today, is you will communicate in these rapid sessions constantly, but you’re not going to care where you are,” Adam Cahan, senior vice president of video and emerging products, told me yesterday at the Livetext launch event.

The user interface is a lot like Periscope, but for one-on-one conversations. There’s not much to it, either. Users text as they normally would, and the text appears on the screen over the video. To make text smaller you can put in an ellipsis; to make it larger you can add three exclamation points. If you want to see your whole conversation, just tap your text.

Like Snapchat, Livetext is ephemeral; dialogues disappear once you leave the conversation.

When I first launched the app and tried to get in touch with one of my friends, there were a lot of false starts, but eventually we connected. My immediate impression is that silent video is really weird. I’m staring at my friend’s face, but we can’t hear each other.

“No audio makes it awkward,” my friend concurs. 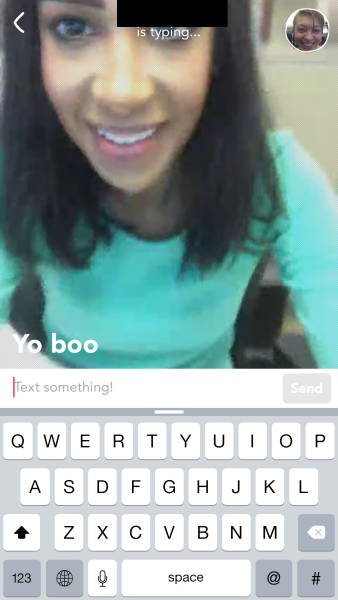 The lack of audio also makes the whole experience a little comical, which is good in a sense. It gives the app an element of Snapchat-like goofiness. However, I was texting from my desk at work and my cackles drew a lot of funny looks. 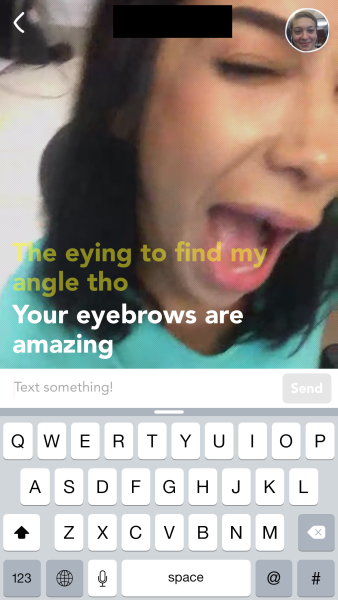 For teens and college students livetexting from class, this also poses a problem. My friend and I tried to come up with reasons we would use Livetext… 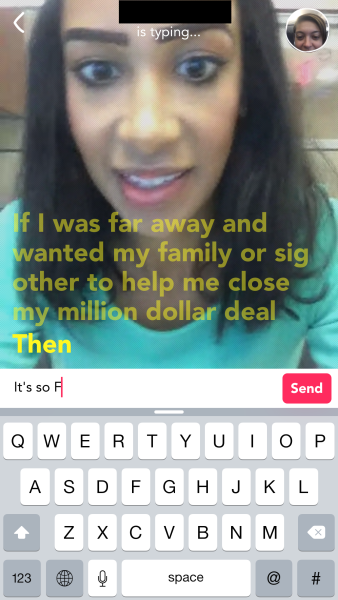 …and failed. “I don’t need this in my life,” my friend writes.

Another friend who tried the app with me was fairly expressionless the whole time except for a few smiles here and there. I was also somewhat stoic. As a result, I found myself typing out “LOL” and using emojis to convey that though I wasn’t actually laughing, I thought what he was saying was funny.

Perhaps that’s because speech and language are as much a part of conveying emotion as reflexive facial movements. Also, facial expressions often happen in tandem with something that’s said. A furtive smile is very different from laughing out loud, and chances are most people don’t want to be caught giggling to themselves in public. Getting the most out of Livetext really requires a performance, a behavior that social media broadly encourages amongst its users. And that requires a lot more effort than a regular text, making it difficult to multitask.

My friend and I regularly text throughout the day, but we both have jobs. It’s easy for us to use a regular messaging app like iMessage or Google Hangouts, both of which are on desktop, to communicate while we’re in the middle of other things. Plus with regular text there’s no pressure to immediately respond to the other person. So Livetext might not work for us, at least during the week.

But it’s not just office workers for whom this kind of experience wouldn’t work. People who work in the service industry or anywhere else where cellphones are largely prohibited wouldn’t really be able to use this app — at least not during working hours. Stealing into the bathroom to shoot someone a text is easy enough, but trying to get someone on video can be a more timely endeavor.

That said, Cahan does have a point. Mobile devices are an increasing part of being in public. Daily, I watch people shamelessly holding up their selfie sticks on Manhattan street corners, greedily blocking passersby from getting to their destinations in effort to get that one perfect shot. With the proliferation of services like Snapchat and Periscope (or Meerkat), people will likely get more comfortable video-chatting on their phones while they’re doing something else.

So starring at someone while texting could be the new thing — eventually. For now, I’m pretty satisfied keeping them separate.