At the bottom of this page are recommendations for “Promoted Stories,” from the Outbrain content discovery service.

Such recommendations — and similar ones from competitors like Taboola and Gravity — are common on the Web. Today, a new video-oriented content discovery service launches, with the aim of presenting recommendations that are tailored to the viewer.

Called Prizma, it is the first product of FEM, a Los Angeles-based startup founded by three women who say their platform goes beyond the disjointed content recommendations that readers often see. FEM is also announcing today a score of $3 million in seed funding.

“Many of the headlines and images [in other services are] exploitative,” cofounder, CEO, and ex-Google executive Rachel Payne told me. “We think about content differently,” she said, adding that “what hasn’t happened is take the female perspective.”

I asked what a female perspective might be for suggested content. She said it would “take into account the interests of the whole person, in a variety of contexts.”

She pointed to recent stories about Pluto and Bill Cosby.

A story about Pluto on CNN, for instance, displays Outbrain’s Promoted Stories at page bottom. There are linked images to stories about new car tires, new golf clubs, an Alienware gaming computer, and, on a health insurance company’s website, one about the expense of health care.

A search for Bill Cosby brought up a story on Salon.com, “Bill Cosby’s accusers paint a chilling portrait of the man and his legacy: ‘I’m thinking it’s not going to be, Oh, great comedian. It’s going to be, Oh, serial rapist’ “.

At page bottom are “Related Videos” via Taboola: “filthy NYC salons,” nail salon exploitation of workers, and “how to tell if your nail salon is exploiting workers.” Although the site is called Salon.com, there is no mention of nail salons in the story.

A new page load brings up another selection of recommended stories, but these, and countless other examples, show how often recommended stories seem unrelated to the story content, and/or employ some sexual tangent to score a click.

Instead, FEM says, content recommendations — such as for other video clips — should be an extension of the interest that brought the visitor to that page, should induce them to remain on the site, and should encourage them to come back for more.

A woman watching a yoga video in a story about yoga or fitness, Payne said, might be interested in “dealing with stress, getting fit for the summer, and her long-term health.”

She pointed to one publisher partner, entertainment news site HitFix, that worked with Prizma during its just-completed six-month beta phase. The site “could attract people to their site,” she said, “but they couldn’t keep them.” The pattern was “click, watch, leave.”

Selections from the site’s large video library were displayed using the carousel approach, which allows viewers to scroll to see related clips. But these were not always related to the topic or to the likely profile of that visitor, Payne told me. By contrast, she said, Prizma on HitFix is offering a selection of video clips that are “contextually relevant” to the story or video at hand.

Another publisher partner, Bankrate.com, today begins offering Prizma’s video recommendations for “users who want to understand larger [financial] problems, like 401k or credit scores.” The platform offers recommendations from a site’s own video library or from syndicated partners, with roll-in ads. 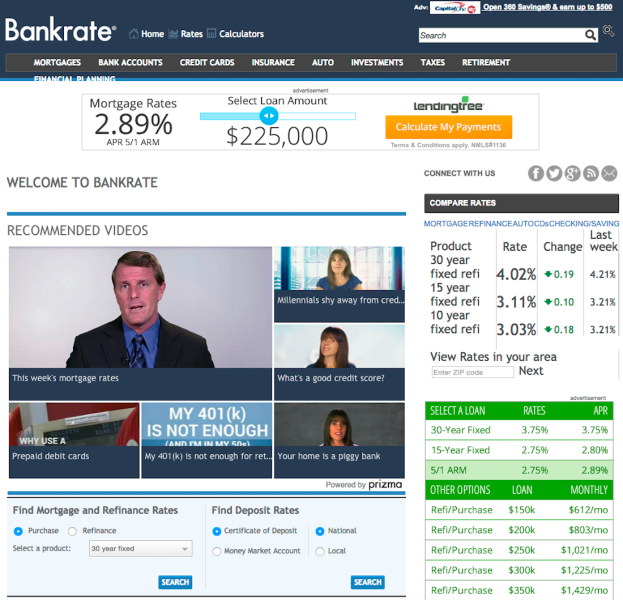 Above: Video recommendations from Prizma on the Bankrate site

Prizma is designed to take into account the viewer’s motivations, interests, emotional states, and behaviors, according to chief data scientist, cofounder, and neuro-economist Meghana Bhatt. She said it employs machine learning, lessons from neuroscience research, and the creation of new, videoclip-related metadata that enable “us to make statistical inferences [predicting] what a viewer will enjoy and will want to watch next.”

“We take content focused on the person [you] want to be,” chief technology officer, cofounder, and ex-Google tech lead Natasha Mohanty added.

The company says the results bear out their approach. It claims about a third of the viewers who see a video served through its platform return within seven days to watch more videos, as tracked through anonymous cookies. By contrast, they point to Taboola and Outbrain’s repeat rate of 10 to 15 percent over 90 days. Additionally, FEM says visitors who watch an entire video, on average, watch two more.

The new seed funding, which will be used to bring the platform to market and scale it, came from Javelin Venture Partners, MESA+ LLC, Walt Disney Company subsidiary Techstars (Prizma participates in the Disney Accelerator program), and several angel investors. It brings the total raised thus far to $3.3 million.