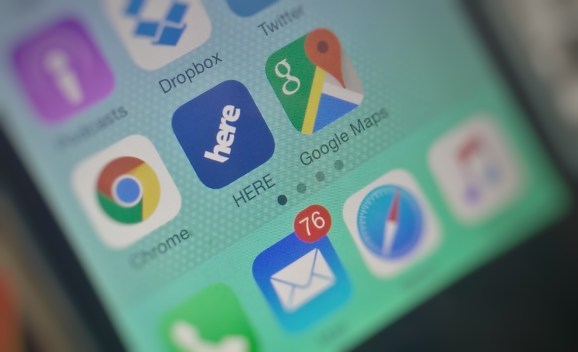 Following what was surely one of the least well-kept secrets in acquisition history, Nokia finally confirmed the sale of its Here mapping division earlier this morning.

The buyer, as expected, was a consortium of German car manufacturers — Audi, BMW, and Daimler. The value? €2.8 billion ($3.07 billion).

It’s the third notable piece of acquisition news to emerge from Nokia Towers in the past 15 months. The Finnish tech titan sold its mobile phone division to Microsoft for $7 billion last April, going on to acquire France’s Alcatel-Lucent for $16.6 billion in stock a year later to help create “next-generation network technology and services.”

At the time of the Alcatel-Lucent deal, Nokia also gave its clearest indication yet that Here was surplus to requirements, saying it had “initiated a review of strategic options, including a potential divestment,” for its Here business.

This helped kickstart a mad scramble to acquire Nokia’s mapping unit, with Uber reportedly tabling $3 billion to seal the deal. A number of other big tech companies were also reportedly interested, and Facebook’s switch to Here maps back in May set some tongues wagging. But it seems the German car giants were determined to have Here all to themselves.

Why was Nokia’s Here such a sought after property? And why did Nokia want to sell? Here’s a quick recap of how Here came to be.

Nokia’s first foray into digital maps can be traced all the way back to 2001, when the company was still a mobile phone giant in its own right. Nokia became involved in a 3D maps consortium called TellMaris, acquiring the underlying software outright in 2006. It then made an existing mobile app called Smart2Go available for free download on Nokia and Windows Mobile devices.

Fast forward to 2007, when Nokia acquired NAVTEQ for $8 billion. NAVTEQ was a provider of digital map data for car navigation systems, mobile phones, and other platforms. It’s this that would later become the powerhouse behind Nokia’s maps.

A handful of smaller acquisitions later, Nokia rebranded what had been known as Ovi Maps as Nokia Maps in 2011, before changing the name yet again to Here the following year.

While Nokia has recently embraced other mobile platforms, with the launch of its GPS navigation app on both Android and iOS, its big appeal for third-party companies lies in the quality of the mapping technology that underpins it.

Alongside Google, TomTom, and OpenStreetMap, Here is regarded as one of the four main global online mapping platforms. And for many, Here is a far more appealing proposition than Google Maps, given that Nokia’s offering serves up full offline access to entire countries and regions — for free. But while this was a big selling point for users, it’s not what companies interested in acquiring the service would have cared so much about.

Nokia had previously struck a plethora of deals licensing its mapping technology to major companies, including Amazon, Bing, Garmin, and Yahoo. And back in December, Nokia scored a notable deal with Chinese Internet giant Baidu Maps.

However, Here has been a big player in the land of automobiles for a while, and it’s said that Nokia’s mapping technology powers around 80 percent of in-car GPS navigation systems. More than half of Here’s $1 billion revenue in 2014 was generated by the automobile industry.

Each of the three consortium members already use Here maps in their cars, so buying the mapping and navigation technology from Nokia enables them to retain full control — rather than allowing that software to fall into the hands of a company such as Uber.

For Nokia, the deal is all about cleaning up, consolidating, and restructuring. The company is a different beast from what it was when it acquired NAVTEQ eight years ago. It was clear that Here was becoming an increasingly odd fit for the company. Also, according to Nokia’s latest Q2 financials, Here accounted for less than 10 percent of revenues, with only a small operating profit to show for it.

So on the one hand, Here is an excellent, well-regarded platform. But on the other hand, Nokia was moving in a new direction and Here was weighing it down.

Once this deal is finalized in early 2016, Nokia will consist of Nokia Networks, its broadband network infrastructure business; and Nokia Technologies, a division that will aim to keep the brand alive in the public sphere.

Indeed, it’s clear that Nokia plans to re-enter the mobile phone realm at some point in the future. But with the sale of its devices and services unit to Microsoft last year, it lost much of its manufacturing and distribution capabilities. Nokia still has designers and technologists capable of creating phones, but it will have to follow a brand-licensing model instead.

“With this step we complete the latest stage of Nokia’s transformation,” explains Rajeev Suri, president and CEO of Nokia. “We integrated the former Nokia Siemens Networks, divested our Devices & Services business, and have now reached agreement on a transaction for Here that we believe is the best path forward for our shareholders, as well as the customers and employees of Here. Going forward, we will focus on our planned combination with Alcatel-Lucent. Once that is complete, Nokia will be a renewed company, with a world-leading network technology and services business, as well as the licensing and innovation engine of Nokia Technologies.”

It will be interesting to see where Here goes from, well, here. The official line is that not much will change from a user perspective. But the fact that Here is owned by a consortium of three car manufacturers could, in theory, deter other automobile firms from using it.

That said, there has been some suggestion that other car firms will be invited to join the consortium — and this would definitely make sense. The power of Here lies in the number of cars and drivers that are using it, as this  data powers the real-time traffic and map updates. So it’s very much in Audi, BMW, and Daimler’s interests to have all major car-makers on board.