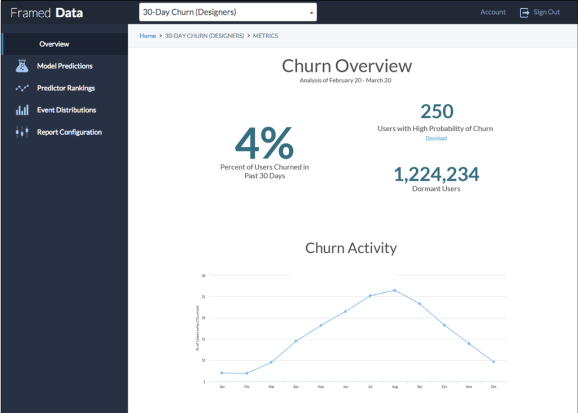 A churn prediction in Framed.

Framed Data, a startup with an application that helps software company salespeople retain existing customers and increase sales, is launching today after more than a year in beta.

The startup has built up more than 1,000 customers, with almost half of them in software-as-a-service (SaaS), according to founder and chief executive Thomson Nguyen in his blog post on the news today. Now the trick is to keep these customers hooked and attract more. The launch comes eight months after Framed announced a $2 million seed round; at that point, the startup had more than 600 customers.

One Framed competitor, Frontleaf, was acquired by Zuora in May. Other competitive services include Gainsight, Preact, and Totango.

Framed’s tool can predict churn and upsell. Certain tiers of service include a monthly check-in with a data scientist.

Read Framed’s blog post to learn more about what the startup discovered in its beta program.