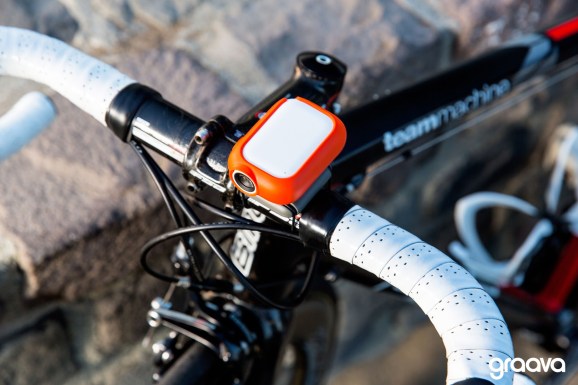 Each week our friends at Backerjack highlight a cool crowdfunded gadget. This week we look at Graava action cam, which is taking pre-orders in an independent campaign.

With the formidable video quality offered by some smartphones, a camcorder’s got to have something special to arouse interest. GoPro figured out that small size, ruggedness, and a wide angle lens are keys when it comes to standing out from the crowd. The Bandit, GoPro’s popular 4k camera, has attracted the attention of a number of competitors, including Contour, Drift Innovation, Sony, C&A Marketing (using the Polaroid Cube brand) and, more recently, TomTom (yes, the GPS company).

Graava enters this crowded field with a small, polished camcorder that can be affixed to a range of bikes and apparel. Lacking an LCD (as is typically the case with these products), it instead has a grid of LEDs on its side that indicates the product’s status, as well as an enclosed HDMI connector and microSD slot for expansion. It can also be charged wirelessly using the Qi standard. What sets Graava apart is that it has the ability to analyze the video it captures and pick out the most interesting parts (depending on the length of the video). And when it’s not capturing extreme surfing, it can be used to capture the gentle sounds of a napping infant, doubling as a baby monitor.

While there are a number of smartphone apps, such as Magisto and RealTimes, that can create video highlights of footage, Graava promises to give a little more. In fact, two Graava camcorders can even combine their footage of an event to create a video with different points of view, although this requires a paid subscription service. Graava is on pre-order for $249, a $50 discount from the expected retail price, and is due to ship in February 2016.

Assuming the video quality is roughly on par with that of competitors, the value of Graava will be determined by how well it cranks out highlight videos. It’s a likely bet that it will do a good job of filtering out boring stretches. The bigger challenge is whether its host of sensors — including one to measure heartbeat — will pick the scenes that the video maker would choose. It may miss on that front, but it should at least produce something more interesting and concise than raw footage. Alas, the hours-long processing time it will require to produce a clip of a few minutes will diminish the spontaneity of sharing. The ability to combine footage from two cameras is a great bonus, but more details need to be seen regarding that option.

To keep up with the latest crowdfunded gadgets, sign up for the Backerjack Daily Digest.