Google’s cofounders Larry Page and Sergey Brin appear to be moving beyond the day-to-day operations at the tech giant. The two will be running a new venture called Alphabet, essentially an umbrella that will house a “collection of companies,” the largest of which will be Google.

Rather than maintain Google as a single massive entity, it seems Page and Brin have opted to shift the structure to one which is more streamlined. In other words, each company underneath Alphabet will be focused on issues that are “afield” of Google’s main Internet products. Such entities include its Life Sciences team, which focuses on its glucose contact lens, and the longevity exploration team at Calico. 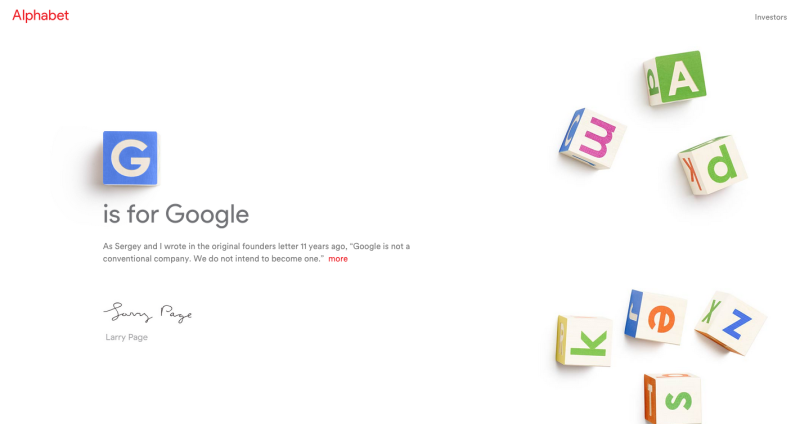 Other companies under Alphabet will include its mysterious X lab and its investment arms, Google Ventures and Google Capital.

So what remains within the traditional Google? Search, advertising, YouTube, email, maps, and of course Chrome and Android (which heir-apparent Sundar Pichai took over in 2014). Nest, Fiber, and Google wearables like Google Glass will apparently be cast to Alphabet, as most likely will the self-driving car initiative through Google’s automotive program.

According to Page, Alphabet Inc. will replace Google as the publicly-traded entity. All shares of Google will automatically convert into the same number of shares of Alphabet — with the same rights. “Google will become a wholly-owned subsidiary of Alphabet. Our two classes of shares will continue to trade on Nasdaq as GOOGL and GOOG.,” says Page.

All of the businesses that fall under Alphabet will have their own individual chief executives. Page says that with the new structure, the company is planning to implement segment reporting for its fourth quarter earnings results. As such, Google’s financials will be provided separately from the “rest of Alphabet’s businesses as a whole.”

We liked the name Alphabet because it means a collection of letters that represent language, one of humanity’s most important innovations, and is the core of how we index with Google search! We also like that it means alpha-bet (Alpha is investment return above benchmark), which we strive for! I should add that we are not intending for this to be a big consumer brand with related products–the whole point is that Alphabet companies should have independence and develop their own brands.

In after-hours trading, Google’s stock is up 5.25 percent.