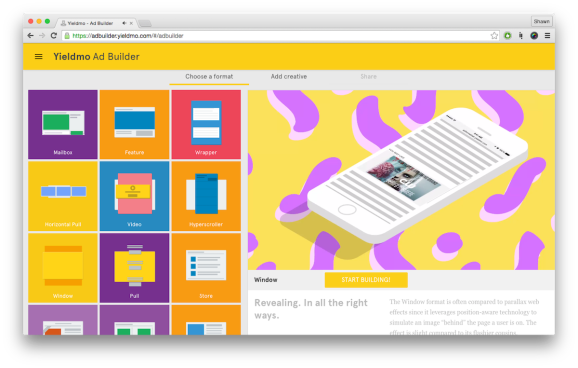 A screen from the Yieldmo Ad Builder

Creating and getting approval for an engaging mobile ad just got easier. Adtech shop Yieldmo is today releasing its online Ad Builder, which you can try out yourself.

The New York City-based company, backed by the likes of Google Ventures and Time Warner Investments, offers a private marketplace for mobile ads. Its network, according to comScore, reaches about 110 million unique users.

The new tool, intended for any advertisers and publishers in its ecosystem, allows an ad to be created in minutes — and, potentially, approved within hours — in any of the 16 new formats that Yieldmo has developed in its Ad Format Lab. The user adds assets like graphics or text and simply clicks through choices.

The formats are designed to engage mobile users, and go by such names as Hyperscroller, Pull, and Wrapper.

The prototype ad shows how it will appear in the mobile web. Head of design David Goligorsky told me the versions for iOS and Android apps will look essentially the same, although the design may need a bit of tweaking by Yieldmo.

Here’s a silent demo of the tool:

Once completed, the prototyped ad can be shared with approvers via a URL. While the Ad Builder is desktop-based, you can preview the prototyped ad on the target device by opening the emailed link. The ads are also intended for tablets, although the tool only shows a smartphone. When approved, Yieldmo can move the prototype ad as a final ad into its system.

The self-service Ad Builder, which had been used only within Yieldmo, is part of a project the company is internally calling Artic Falcon. Additional phases of the project will add such features as the ability to specify ad spend and flight dates.

Product design lead Shawn Sprockett noted that, while there are other Ad Builders, this one is unique for the quality of its ad formats and its ease of use. He pointed out that Google has an ad builder for DoubleClick customers, ad shop Celtra has one that is “more complicated,” and there are basic ones in Facebook, Twitter, and Google’s AdWords.