It’s time for another batch of startups to show off what they’ve got. It’s Y Combinator’s demo day, and over the past two days, 104 companies have presented their services, devices, technology, and promise. Will one of these companies become the next Stripe? Dropbox? Airbnb? Or a potential unicorn?

These two days saw presentations from startup after startup, on topics ranging from marijuana to education, ecommerce to biotech. There were some great presentations, but did any really stand out?

Because of the sheer number of startups participating in Y Combinator’s summer 2015 batch, they were divided up into two different groups. The first day focused on startups within the enterprise, biomedical, hardware, and fintech spaces, while the second day featured those pursuing the consumer, business-to-business, developer tools, marketplaces, and nonprofits sectors.

Here’s a roundup of the 11 that were perhaps the most notable from this season’s batch (in order of presentation):

Foxpass is a service aimed at helping simplify security. The company focuses on ensuring that businesses have a strong infrastructure, even as they use the likes of Amazon Web Services or Google’s technology. It utilizes cloud-based access controls to help IT managers, system administrators, and those in human resource better manage who has control over files, servers, Wi-Fi networks, and printers.

Oolu focuses on helping people in West Africa tap into solar power to provide lighting and charge cell phones more conveniently and at a fraction of the standard price. The company says that there are 150 million people in the region living without electricity and often relying on flashlights, candles, or kerosene. Oolu leases a solar home system of three lights and two cell phone chargers for just $6 per month. This is much cheaper than the $14 per month families would typically have to pay for electricity.

To date, the company has 1,350 paying customers with an additional 2,000 on the waiting list.

Ironclad is an automated assistant that will manage the legal paperwork for your company. If you’re looking to hire a new employee, draw up a sales agreement, or file another legal document, the service will send you a draft version for your lawyer to review. It also provides you with a cloud-storage area where you can store your documents for future reference. The company says it is growing at 40 percent week over week.

Focused on providing driverless shuttles to private college campuses and other properties, Auro Robotics already has signed letters of intent from three universities. The company charges $5,000 per month for the shuttles, which have a top speed of about 10 miles per hour. Its vehicles are already in operation at Santa Clara University, where it has a pilot program in place and where it will begin paid deployments later this year. Other venues of interest for Auro Robotics include amusement parks, large industrial sites, and resorts.

We’ve all been hearing about how drones are the future — well, Flirtey wants to let us know that that time is now. While Amazon has been talking about drone delivery, this Y Combinator startup has been implementing it — at least in New Zealand. Flirtey claims that users need only push a button and within six minutes of placing their order, a drone will be dispatched to make a delivery. On demo day, Flirtey stated that it was one of a few companies to have access to two of the six available drone testing sites around the U.S. and said it is already collaborating with NASA.

In New Zealand, Flirtey has signed a partnership with the country’s largest package delivery company. It’s said that 83 percent of all packages handled by this company are eligible to be delivered by a flying robot. And what’s more, Flirtey has a deal with McDonalds…so get ready to get that Happy Meal or Quarter Pounder with Cheese delivered by air. 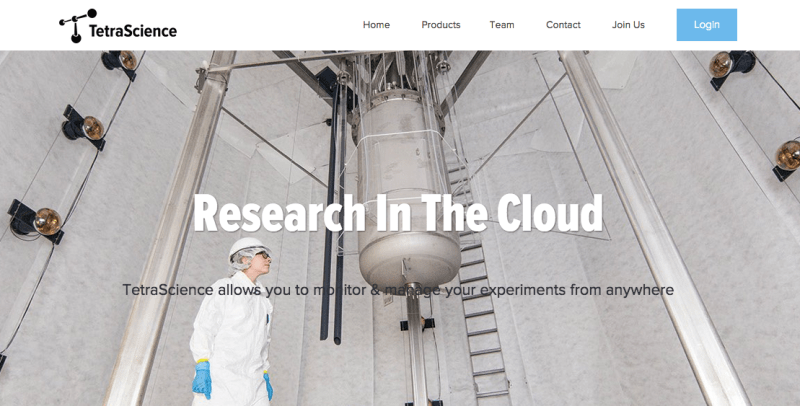 Are you a researcher investigating potential vaccines or cures for disease? Have you ever had a need to share information with a colleague or with other scientists around the world and wished there were a simpler way to do it? TetraScience seeks to be that solution by making any device Internet-connected.

Researchers using TetraScience can monitor and manage their experiments from any location while also storing their results on its cloud-based storage server. TetraScience already has 10 different pharmaceutical companies signed up, and is targeting academic and hospital environments as well — wherever pre-clinical trials are being held.

The company says its growth has increased 420 percent and it has a $912,000 run rate. Researchers don’t need to have “smart devices,” as TetraScience says it can convert any old piece of equipment. The company charges a yearly subscription of $299 per device.

Originally aimed at helping students better understand data analysis, Leada pivoted a couple of weeks ago and is now training professionals to find insights in data. Businesses pay Leada to help train their employees to better understand data in order to make appropriate decisions. The point is that, right now, companies have a limited number of analysts to help evaluate the ever-increasing amount of available data. But instead of waiting out delays, companies can create more analysts, through Leada.

Leada has received signed letters of intent from 10 enterprise customers, to the tune of $100,000.

SourceDNA brings developers and app stores together. The idea is to help developers understand where potential security flaws and crashes may occur, while also helping them get through the app review process faster. Apps with problems during the Google or Apple review process will see delays that could result in loss of users and potential revenue.

To date, more than 3,000 developers are using the platform, including those from Uber, Amazon, Facebook, Dropbox, and Chartboost. The company is profitable, with an $800,000 run rate, and charges $40 per month for its service.

Have you ever had to manage content on a website? Did you understand how to use the content management system? If this is a problem for you, then Cloudstitch may be something worth looking at. This startup lets developers select webpages and then places those pages within a spreadsheet, making it easier to manage the content.

Since its launch in June, Cloudstitch has seen an 18 percent weekly increase in the number of new developers. Pilot customers include Mozilla, Google, MIT, and General Assembly.

In 2010, a devastating earthquake hit Haiti. Millions of dollars have been spent trying to rebuild the country over the past five years, but progress has been slow. New Story Charity thinks it has a way to speed things up. With its crowdfunding platform, this nonprofit organization is raising money to help build homes in Haiti.

It takes $6,000 to build a home for a family, and New Story makes the funding process personable by sending sponsors a video of the families moving into their new homes. All work is done by local construction teams, without any outside workers. Compared to the International Red Cross, New Story seems to be doing a much better job: It claims to have built 87 homes in the past two months versus the six homes the Red Cross has built in 5 years.

There are bad people on the Internet. Smyte wants to make it a safer place. The company provides an API to help companies identify those that would do wrong to not only the company itself, but to its customers. Smyte works with marketplaces and social networks to solve the problems of harassment, credit card scams, fraud, and more.

Since coming out of beta six weeks ago, the company has been working with 15 enterprise customers. It has already stopped $100,000 in potential fraud and is analyzing tens of millions of users. It bills itself as the “trust-and-safety infrastructure” of the Internet.