During a keynote at the Intel Developer Forum in San Francisco, Intel corporate strategy officer and resident anthropologist Genevieve Bell explored what it takes to be a “Maker” in the modern do-it-yourself technology phenomenon.

Bell linked the movement to build your own hardware, physical objects, and other sorts of creative inventions to the great inventors like Edison, Ford, Curie, and others. Intel is so excited about this hobbyist movement that it is targeting chips such as Edison and Curie at them for small gadgets that can power the Internet of Things, or everyday objects that are smart and connected.

At the IDF, Bell said Intel decided to support makers as part of its effort to discover new developers and technology ecosystems. That’s why it’s a supporter of Make magazine and the Maker Faire do-it-yourselfer events. Started 10 years ago in Silicon Valley, the first event drew 22,000 people. Last year, there were 131 fairs around the world, including a recent Maker Faire in Shenzhen, China that 200,000 people attended.

“It’s never been a more exciting and accessible time to invent the future,” Bell said. “It’s about changing the world, in small ways and big ways.”

She added, “It’s about breaking the rules. Possibilities and disruption. Hard work. Solitary or collaborative. It’s not always clear what you are doing. It involves curiosity. It certainly involves failures. It is exhilarating. Sometimes people resist it. To me, that is making.” 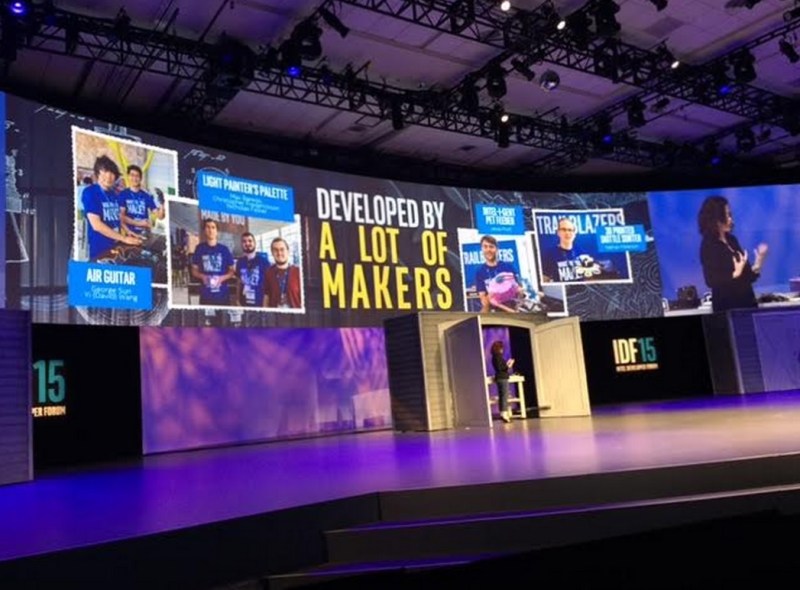 One thing Intel announced in support of makers was a partnership with United Artists to sponsor a TV show, America’s Greatest Maker, that will debut in 2016. The contest will give the winner of the contest a $1 million prize.

“We want to be your co-conspirators,” Bell said. “We want to partner with you and learn from you and be there to help.”

Bell said that Makers come from all kinds of backgrounds. She earned a doctorate in anthropology at Stanford University, where she studied Native Americans and feminist theory.

“I was an obvious candidate to work at Intel,” she said dryly.

She has now been at Intel for 16 years, working full time as an anthropologist studying how people use technology, and part time as a futurist, she said.

“I’ve been studying makers my whole life,” she said. 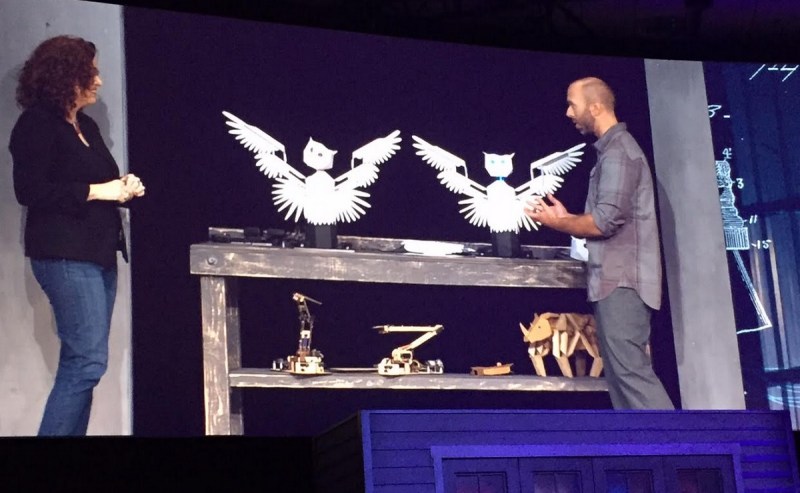 Above: Lucas Ainsworth, creator of Worry Birds, with Intel’s Genevieve Bell on stage at IDF.

Among the Maker things she showed off was a 3D-printed Skittle sorter, which sorted Skittle candies into different colors with the help of an Intel Galileo board.

There was also an intelligent pet feeder (by Jesse Ruth), a light painter’s palette (by Max Bareiss, Christopher Frederickson, and Nicholas Felker), an air guitar (by George Sun and Yi David Wang), and a colorfully lit scarab beetle by Sade Oba.

Dale Dougherty, founder of Make magazine, came out on stage and talked about how he was fascinated a decade ago by hackers and what they were hacking, and their jump from the digital world to the physical world. He studied the tone of do-it-yourself magazines such as Popular Electronics and Popular Mechanics.

“They had a mindset of ‘we can do this,'” he said. “The Maker Faire was a leap of faith. It was show and tell, where people put stuff on a table and talk about it.”

The first issue of Make had a project about kite aerial photography by Charles Benton of the University of California at Berkeley. The architecture professor wanted to see what buildings looked like from above, so he created a kite with a camera that could take a single picture. He jury-rigged a system that could take a photo 90 seconds into the flight with the help of a “silly putty viscous timer.”

That sort of thing was how the modern Maker movement was born.

“It was just ingenious,” Dougherty said.

Another thing that Bell showed off on stage was an invention by a developer named Lucas Ainsworth. He created mechanical “worry birds,” which would move and “worry about things” so that Lucas didn’t have to do that himself. He linked the movements of one of the birds to reports on Twitter about shark attacks. 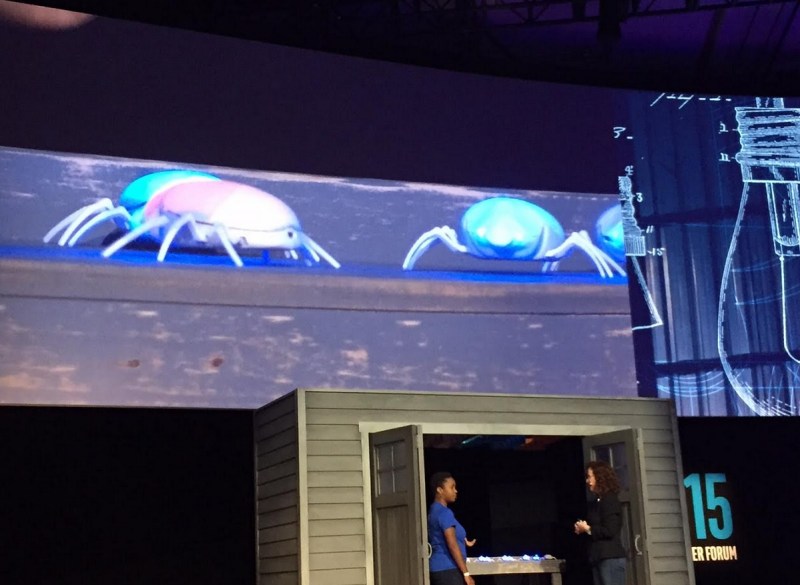 Above: Sade Oba shows off an electronic scarab beetle to Intel’s Genevieve Bell.

After the Ebola virus broke out in Africa last year, a maker named Ken Krieger made an Edison-based machine that could collect data on Ebola outbreaks. It was designed to be sterilized and rugged enough to withstand harsh environments. They are continuing that work with creating more useful tools for those fighting the disease on the front lines.

“It’s definitely not a Silicon Valley thing,” Bell said about the Maker movement. “There’s a lot of technology that is invented out there that is making it back here.”

Bell said that Dougherty’s passion for Makers has remained authentic in spite of its growing corporate support. She said a lot of companies find the space interesting because of the intersection of kids, technology, creativity, and education. She said the Maker movement draws more women and underrepresented minorities who otherwise might not get involved in technology. 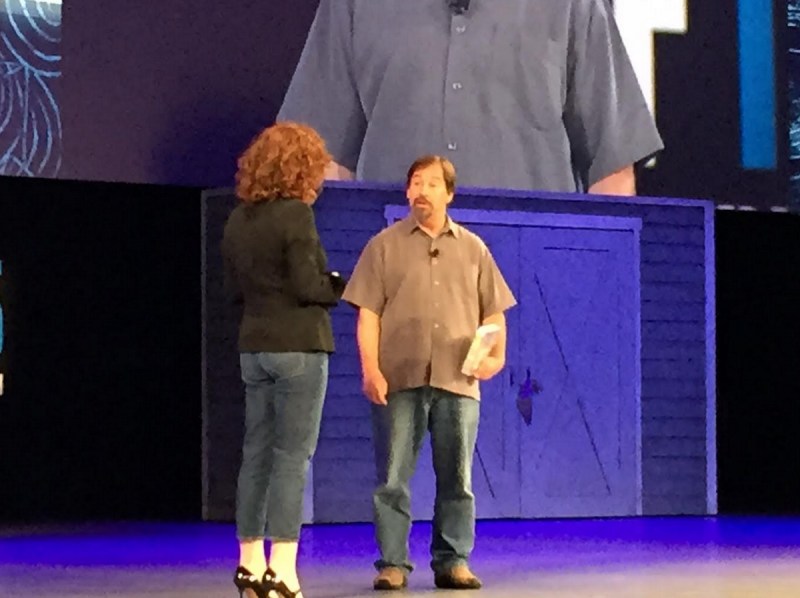 Above: Intel’s Genevieve Bell talks with the maker of an Ebola-tracking tool with Ken Krieger.