Deciding which digital ad led to a sale is one thing. Deciding which attendance at a real-world conference helped the sale is quite another.

Today, B2B attribution vendor Bizible is putting them together by updating its digital attribution model to add some kinds of offline marketing.

CEO Aaron Bird told me his company is the first B2B attribution provider to include such offline factors as conference and event attendance, content syndication beyond a website, and cold calling in its off-the-shelf model.

Other companies may tally information from offline promotion, he said, but they don’t include it in their attribution model.

Marketers need to know which parts of their marketing spend are delivering sales, but accurate assignment of credit to multiple touchpoints is an art as well as a science. When a customer makes a purchase, how much was that decision driven by the website’s info, the mobile ad, the cold phone call, or the attendance at a conference workshop? 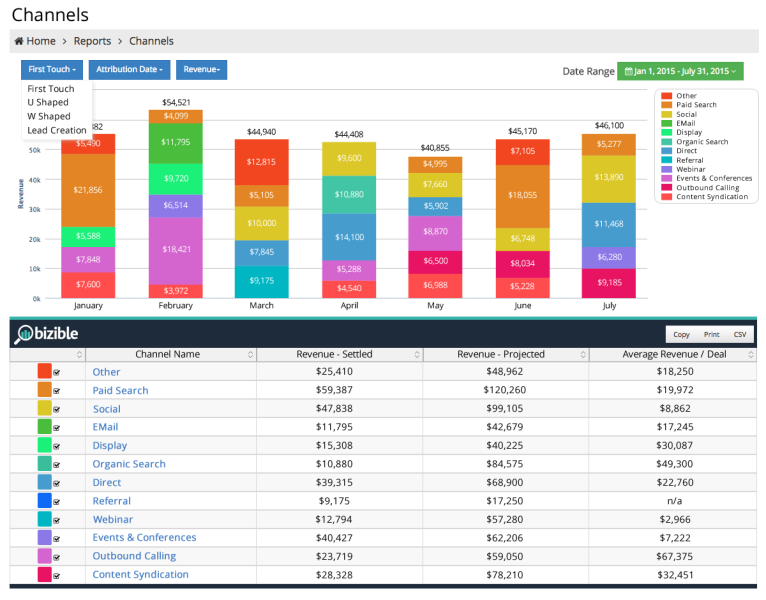 Above: A Bizible screen showing real-world events in the attribution model.

This is complicated even more in B2B sales, Bird pointed out, because many decisions are made by committees. Bizible attempts to deal with this factor by attributing the marketing drivers for each of the decision makers.

A new VB Insight report, “The State of Marketing Analytics: Insights in the age of the customer,” points out that there can be as many as eight people involved in a single B2B purchase decision. And, it notes, nearly 60 percent of the “buyer’s journey” has been completed by the time the sales organization has made first contact, because of the trend for B2B buyers to conduct their own research.

While credit can be assigned to digital marketing and ads by such data as navigational trails, behavioral patterns, and cookies, Bizible assigns credit to offline factors through a collection of clues, such as whether the buyer whose badge was scanned at a conference also signed up for a demo.

The offline data is often obtained via attendance lists made available by conference organizers or by badge scans at booths. It’s then usually added to customer relationship management (CRM) systems, but Bird said other B2B attribution companies’ models, such as Full Circle Insight‘s, don’t include such data.

Prior to this new release, Bizible’s focus was entirely on the client company’s website activity or on paid media that drove traffic to a website. It tracked visitors anonymously via a cookie and then merged that anonymous profile with a known visitor once there’s a login or a registration on the site, such as for a white paper.

However, the Seattle-based company doesn’t include sales from websites in its model. Instead, its focus is on the long sales cycle that involves searches, ebooks, white papers, forms, and, in some cases, conferences. It does not include radio, TV, or print, it says, since other companies track those channels. Bizible’s clients include Optimizely, New Relic, OpenDNS, MongoDB, Kaplan, and Trulia.

Bird said that larger companies have tried to solve offline attribution for real-world events like conferences by building their own systems in-house. B2C attribution companies like VisualIQ and MarketShare don’t have this problem, he said, because consumers — with a few exceptions — usually don’t attend conferences.