In the near future, IoT will drive tremendous innovation in the way our food is grown, processed, distributed, stored, and consumed. Plants and animals will literally have a “voice.” Not a human voice, per se, but a voice based on data that can tell people, computers, and machines when, for example, they are thirsty, need more sun, require medicine, or need individual attention.

Take vertical farms, for example. These operations bring farming indoors where all of the elements required for rapid and healthy growth can be monitored and controlled. These facilities are built vertically, so growing areas can be stacked. This greatly decreases the amount of acreage needed for farming, which allows vertical farms to be located in or near cities, shortening the time needed to transport and distribute food.

From an IoT perspective, vertical farms are connected both internally and externally. Internally, small sensors in the soil or connected to individual plants tell a control system exactly how much light, water, and, nutrients are required to grow the healthiest, most productive crops. Sensors will also tell vertical farmers when crops are nearing their peak for harvesting at just the right time to ensure it’s still fresh when it reaches its final destination.

Externally, vertical farms will be connected to other networks and information systems, including databases that track local demand. For example, local restaurants could input when they need to replenish their fresh food supplies. And vertical farmers could access that information so they know which crops to grow in what quantities. Vertical farms can also connect to the power grid, using their windows as solar panels to supply the system, creating a tight feedback loop between the food supply, the power grid, and consumers. This type of IoT system would have been unimaginable a generation ago. 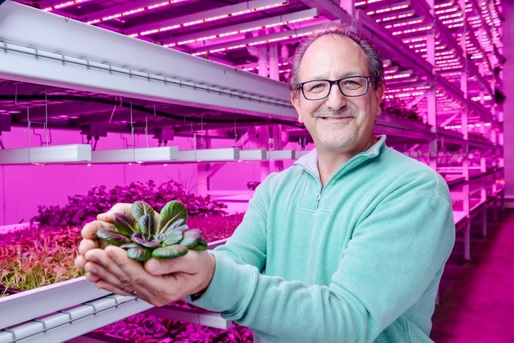 Today, vertical farms are in a state of rational experimentation. And while not yet profitable, the numbers point to a bright future for the industry, especially as the world’s population continues to grow and farmland becomes more and more scarce. For example, Green Sense Farms in Chicago is able to harvest crops 26 times a year using 85 percent less energy, one-tenth the water, and no pesticides or herbicides. A side benefit of lower energy use is lower CO2 output of two tons per month, with the added benefit of creating 46 pounds of oxygen every day.

Vertical farms are also sprouting up in other countries. A vertical farm in Miyagi, Japan, built by Mirai Inc. in partnership with GE relies solely on LED lighting, requiring 40 percent less electricity compared with regular fluorescent lighting. This farm is capable of producing 10,000 heads of lettuce a day and annual sales of $2,939,736 (approximately 300 million Japanese yen).

When we think “vertical,” most people envision something from the ground up. But vertical farms can also be underground. In the United Kingdom, a company called Growing Underground has built a subterranean urban farm 115 feet below a busy south London street uses hydroponics to grow crops free of pesticides. The farm is 1,805 square feet in size and has a carbon-neutral footprint.

A recent National Geographic article, titled, “One-Third of Food Is Lost or Wasted” stated that a collective 3.5 billion acres of land, an area significantly larger than Canada, is plowed to grow food or support livestock and dairy production that no one will eat. To compound the environmental insult, food buried in the airless confines of dumps generates methane, a greenhouse gas far more potent than carbon dioxide. If global food waste were a country, it would be the third largest generator of greenhouse gases in the world behind China and the United States.

One way IoT can help decrease this waste is at the point of consumption. U.S. supermarkets lose roughly 10 percent of their fruits and vegetables to spoilage every year, according to the Department of Agriculture.

In 2012, MIT researchers unveiled a new sensor made from sheets of rolled carbon nanotubes with added copper atoms to detect tiny amounts of ethylene, a gas that promotes ripening in plants. The cost at the time of the announcement was about 25 cents per sensor. Applying Moore’s Law, those sensors will soon be cheap enough to economically place them on individual fruits and vegetables.

By detecting the gasses coming off the produce, analyzing the data, and setting alert thresholds, the sensors could keep department managers in the loop about the real-time shelf life of the store’s inventory. Managers can then decide to lower prices on produce so that it sells faster. Consumers would also know how long the fruit and vegetables they just bought will last. If we know when something will spoil, we’re more likely to use it rather than toss it into the garbage. With IoT, everyone wins, including our planet.

Even though sensor prices have not yet reached the point where it is feasible to place one on every fruit and vegetable, similar technology has been used on a larger scale to detect ethylene gas in greenhouses so that special scrubbers eliminate the gas. This lengthens the life of produce, which helps to eliminate waste. Given these advances and the cost- and size-reducing power of Moore’s Law, it’s only a matter of time before your next apple comes with a freshness sensor.

While water rights are an extremely complicated issue, IoT can also be part of the solution for water shortages being felt in various parts of the world by providing more visibility into water usage, where globally about 70 percent of water is consumed by agriculture, more than twice that of industry at 23 percent, and dwarfing municipal use at 8 percent. As a homeowner, I receive a monthly bill that lists the number of gallons of water I used during the month. While this gives me some helpful data, it doesn’t give me enough information or insights to make intelligent decisions about my water use. I simply don’t have the adequate tools to finely control water usage on a real-time or automated basis.

Using sensors similar to the ones for vertical farming, my yard could tell me when it’s had enough water or which parts need more hydration. In combination with a remotely controllable sprinkler system, this data could be further analyzed and presented graphically on a mobile app to show the impact of my actions. For example, “By reducing water usage for your garden, you saved 8 percent of your target water usage for the month. If you keep it up, you will save $100 compared to the amount you paid last month.”

Now this is information I could use to both make better decisions and to motivate me to achieve certain goals. But, does a drop or two of water really make a difference? Consider this. If just 1 percent of the homes in the U.S. saved 1 drop of water per minute, it would equal 34,715,984 gallons per year. That is enough to water 100 acres of corn. Just imagine what we could accomplish if everyone, including farms and companies, did their part. Collectively, we would have a tremendous impact on the amount of water used while still enjoying the lifestyle we’re accustomed to. 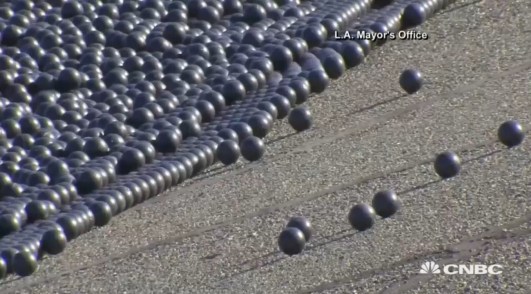 Recently, the Environmental Protection Agency (EPA) required Los Angeles to cover its water reservoir to keep the water from evaporating. One solution was to build a giant pool cover, however, the city estimated the cost to be approximately $300 million. Then, someone came up with an ingenious idea. Why not float plastic balls on the surface to protect the water underneath? After experimenting on a smaller scale, the city worked with local companies to produce millions of “shade balls” at a cost of $35 million (almost 90 percent cheaper than the alternative method). These chemically-treated black plastic balls now cover Los Angeles’ water supply, saving nearly 300 million gallons of drinkable water from evaporating each year.

Now, imagine if each ball were connected.

Solar or motion powered sensors on each ball connected via a mesh network could gather data about water quality and alert officials when algae, contaminants, acidity, and salinity for example, reach certain levels. The balls could also monitor water levels to determine more accurately how fast the finite resource is being used and replenished. Having this information in real time could help water utility operators make more informed decisions to eliminate waste. From a safety and security perspective, motion sensors could detect when someone has entered the water, either by accident or for a more nefarious reason such as contaminating the water supply, so that quick action could be taken.

Back to the Present

Because food and water are such large and important industries, it’s not surprising that several firms, from the largest technology companies to startups, are working on IoT solutions in these areas. Intel, for example, is looking to be a leader in the food and agriculture industry with projects that address water and food security, safety, and sustainability. The company is working with the Australian Commonwealth Scientific and Industrial Research Organization (CSIRO) to build tiny sensors that are placed on the backs of bees to help understand why they are dying in massive numbers around the world. Bees, of course, are of paramount importance because they pollinate approximately 33 percent of all human food sources.

Startups are also getting in on the action. Rachio adds intelligence to water usage for people’s yards. The company’s solution calibrates soil, vegetation, slope, sun exposure, and nozzle types to give customers visibility and complete control over their landscaping through a mobile app. Future products will help people manage water usage throughout their homes. Lumense is a chemical and biological sensor platform that monitors liquids and gases to provide real-time analytics and automated maintenance. The company’s focus is to make our food, water, and air supplies safer and better.

We are on the planet at an incredible period of time in human history. Never before have our challenges been so great. Yet, never before has technology been so powerful. With IoT, we can literally connect anything to anything. This connectedness will require us to think in new ways if we want to use IoT to solve the challenges we face today and tomorrow. Rather than looking at a plastic ball as a singular round object, we can look at it from an IoT perspective by asking, “What could this thing do if it were connected to millions of other balls?” By training ourselves to think in this way, we’ll be to use IoT to better manage our planet including the precious resources such as food and water that we all need to survive.

David Evans is cofounder and CTO of Stringify, a startup focused on IoT. He was previously Chief Futurist of Cisco.