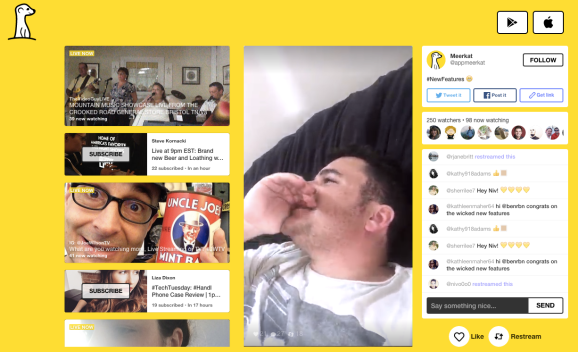 Meerkat has introduced polls for viewers on iOS and Android.

Live streaming app Meerkat today rolled out a bunch of new features, including the ability to share pictures from your phone’s camera roll during a stream and to search all streams by hashtag.

And now it’s easy for people streaming live to poll people who are watching.

“That means you can write, ‘poll, space,’ and then whatever question you want,” said Meerkat cofounder and chief executive Ben Rubin during a Meerkat stream in which he announced the news.

Poll: Do you believe in love? Streamers can now Poll the audience by asking a Q in the comments! @LizaDixon #MeerPoll pic.twitter.com/Aq0jvHZ4sh

The updates, including the “Show & Tell” photo-sharing feature, are now live on iOS and Android. A Medium post on the news is here.

Live streaming apps like Meerkat and Periscope have become popular in recent months. Now people making streams can do more to create a special live experience for any friends, family members, and even strangers who are watching.

Above: I would Meerkat the crap out of this if I saw it in real life.