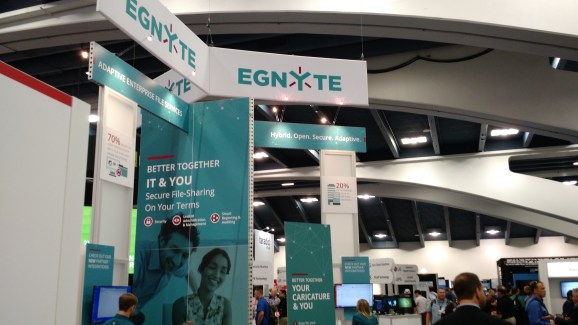 The Egnyte booth at VMware's 2015 VMworld conference in San Francisco on Aug. 31.

With the Office integration, you can now open and edit files inside Office desktop apps like Word, as if it’s just another file locally stored on a PC. The integration also works with Microsoft’s Office mobile apps and on the Internet.

An Egnyte employee was showing off the new integrations today at the Egnyte booth on the exhibition floor at VMware’s 2015 VMworld conference in San Francisco. The company has a blog post on the news here.

Box, which only offers cloud-based file syncing and sharing, made an announcement about a similar integration with Office Online earlier this year.

These integrations matter for Egnyte because people actually write documents in Word, prepare presentations in PowerPoint, and assemble spreadsheets in Excel. And salespeople live in Salesforce. (Okay, and email too). It’s just a little easier for everyday users, and Egnyte is now able to say it has a native Office integration right up there with Box — now a publicly traded company — when it comes to support for the Microsoft workflow. Egnyte already has a Google Drive integration.

Backed by Google Ventures and others, Egnyte last announced funding in December 2013. Customers include Bloom Energy, Home Depot, and Ikea.