Mobile marketing platform Fiksu is today expanding how it targets audiences with the release of a new version of its Mobile Audience Platform.

It adds a greater emphasis on targeting by mobile device IDs, plus a new set of 250 different user personas.

Previously, the Boston-based company, which delivers ads and marketing messages to mobile web and apps, had focused on audience segments revealed by general behavioral patterns of mobile site visitors and app users.

For instance, chief strategy officer Craig Palli told me, a campaign for a fast-food chain like Dunkin’ Donuts might direct ads at, say, visitors to the ESPN website and users of that sports network’s app because those audiences were responsive to fast-food ads.

Now, Fiksu’s updated platform is emphasizing mobile device IDs, grouped according to a new set of personas. A campaign for Dunkin’ Donuts might still include ESPN site visitors and app users, but it would primarily target users of mobile devices who have shown to be responsive to this or similar campaigns. 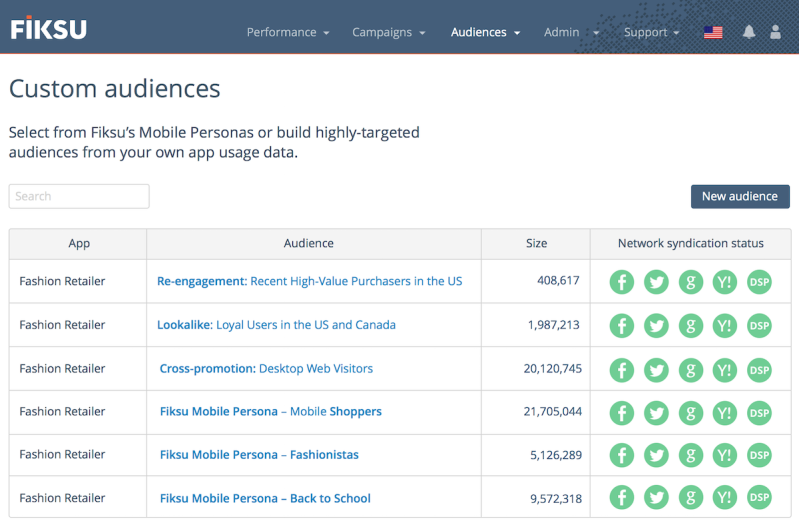 Above: A screen in Fiksu’s updated platform, with the new personas.

Fiksu says it has about 2.6 billion mobile device IDs, with event-based data coming from its SDK in apps.

The responsiveness of device owners to certain types of campaigns will characterize them as any of 250 user personas with similar patterns of mobile behavior, such as Urban Dweller, Frequent Traveler, and Quick-Serve [Restaurant] Loyalist. Palli said that, on average, each persona is stocked with the behavior of the users of 23 million device IDs.

The new approach isn’t ignoring the characteristics of app users or mobile site visitors, Palli said, but those factors are now secondary to device ID targeting.

Fiksu can also employ publishers’ first-party data on their own customers and outside third-party data to mesh together more extensive targeting. This greater emphasis on collecting and merging data, Palli said, is creating more of a data management platform (DMP) role for Fiksu, in addition to its job as a mobile advertising demand side platform (DSP).