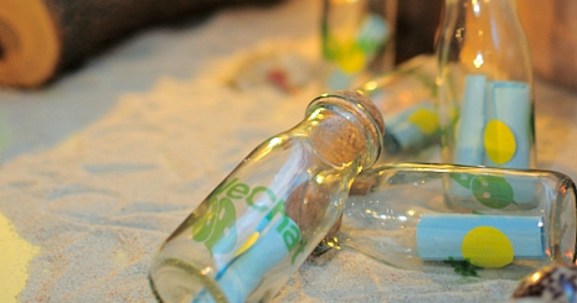 Connie Chan, a partner at venture capital firm Andreessen Horowitz, took a deep-dive into China’s mobile messaging platform WeChat in early August. The longish blog posting attempts to peel back the layers, to dissect the internals, of the once-simple chat app that has today sprouted into a world unto itself.

Setting the scene for her commentary, Chan said:

Much has been written about WeChat in the context of messaging app trends, but few outside of China really understand how it works — and how it can pull off what for many companies (and countries) is still a far-off vision of a world managed entirely through our smartphones.

Today, WeChat made clear that it wants you to understand more about who it is and what it does. In an English-language blog posting clearly aimed at the world outside China attempting to look in, the Tencent-owned app offered up a slice of what it calls the WeChat lifestyle.

“We’ve scoured the globe and brought you a few examples of ways brands are helping users embrace the WeChat lifestyle,” the company wrote, “and helping them make payments, shop online or talk about their favorite TV show all within one app.”

While Facebook-owned WhatsApp hit 900 million monthly active users last week, WeChat is not far behind — it hit 600 million at the end of August. (Though Lily Kuo, writing for Quartz, has explained why WeChat is nothing like WhatsApp.)

But unlike WhatsApp, which still notably lacks a real business model, some estimates peg WeChat’s average revenue per user at $7. A quick calculation indicates that the app could be pulling in as much as $4.2 billion per year in transactions (clearly not all of that ends up in the pockets of Tencent, though).

Nonetheless, Tencent is likely interested in breaking beyond China one day. Yes, China is a huge, self-contained market — it passed 250 million 4G users in July (double the number in the U.S.) on a total mobile user base of nearly 1.3 billion — and one that most companies could happily live and die in without ever looking beyond the borders. But, Tencent isn’t most companies, and WeChat isn’t most apps.

For this reason, it’s likely that WeChat will start making an ever-greater marketing push outside its home turf (and in English). If it ever wants to acquire new users in the West — users who have traditionally turned to WhatsApp or Facebook’s Messenger, for example — it needs to break down the existing perception of WeChat as a poorly understood alien messaging app favored only by Chinese users.

Which, if we’re being honest, is still largely true.

So, in the spirit of bridging that divide, WeChat today showcased some ways that users and businesses are interacting on its platform to achieve “more than just messaging.”

It breaks down the use cases by category: smart living, transportation and delivery, employment, online payments and donations, media and entertainment, and finally, health.

Rather than paraphrasing it all, I’ll serve it up here just as WeChat dishes it out. Starting in reverse order (because I’m a maverick like that), first up we have Lybrate under the health umbrella:

When you’re feeling sick, the thought of having to travel to a doctor’s appointment can seem daunting. With the Lybrate.com official account, WeChatters in India can consult thousands of top registered doctors directly from WeChat for free and anonymously. [It] allows you to also book appointments or if you’re looking for general health advice, [and] you’ll be able to receive top tips on healthy living, parenting or managing chronic diseases.

Next up is Big Brother Mzansi under media and entertainment:

WeChatters are embracing the second screen experience with Big Brother Mzansi in South Africa. For the first time this season, followers could vote for who they would like to see sent out of the house next, chat with other fans and even interact with the contestants. In addition, viewers could send their messages of support and see them displayed on the dedicated channel created for the show.

Sasa (link in Chinese) is in the online payments category:

Beauty product retailer Sasa is the first global retailer to accept payments via Tenpay, WeChat’s mobile payment solution, in their Hong Kong stores. Each store is equipped with mobile payment capabilities, and by scanning a unique QR code for each transaction, users are able to buy products through their mobile phone at the physical store.

Watsons is also in online payments:

Watsons, the largest personal care stores in Asia, opened an official account and brought its e-store to life on the WeChat platform. Users can purchase goods through the e-store or check out the latest promotions without leaving the app. In select regions, followers can also access their electronic VIP card, and receive directions to their nearest Watson’s store by sending their location to the account. Watsons even created a voting platform for a contest they ran in Malaysia for the hit show Raya Ni Dah Kahwin. As a popular show amongst locals in Malaysia, during the Hari Raya period [we] encouraged WeChatters to vote for their favorite actor or actress for a chance to meet the stars themselves.

UNICEF is showcased in the donations space:

UNICEF’s official account introduced a payment channel and platform to support relief efforts around the world. By partnering with WeChat, users can contribute easily and conveniently through their smart phones. WeChatters can specify the type of contribution, and even donate “Inspired Gifts” where the monetary donations go towards specific actions, such as providing vaccinations, education resources, or micronutrients to improve children’s lives around the world.

M4JAM comes in under employment:

M4JAM (Money for Jam), a micro-jobbing service in South Africa, gives WeChatters the opportunity to earn some extra cash by completing small jobs around town. All jobs that come from M4JAM are hosted through WeChat’s official account. Jobs can range from taking surveys for research companies, [to] auditing merchandise to mystery shopping. M4JAM not only helps WeChatters earn easy money, but also helps organizations take large time-consuming jobs and transform them into micro-jobs that the community can work on together.

Easy Taxi is the transportation example:

WeChat and Easy Taxi Singapore partnered up last year so no one has to endure the hardships of hailing a cab again. Users can instead book taxis directly in the WeChat mobile app with just a few taps. WeChatters simply follow the official account, “EasyTaxiSGP,” and then click the button “Call Taxi.” A cab will then be on its way based on your shared location.

And Picup falls into the delivery category:

The picup official account turns your mobile phone into a handy delivery remote control, switching your online order into a real-world delivery. Through this innovative service, customers have access to a courier service that is efficient, accessible and simple to use. It only takes a few clicks to sign-up, and once registered you’ll be able to send your order to the closest driver without any paperwork or admin hassle.

By scanning a room-specific QR code, WeChatters are able to connect to the suite and control various aspects of the room remotely through their phones via WeChat. Imagine walking into your hotel room after a big day out and being able to switch on the lights, open the blinds and curtains, and play with the room temperature, all from the comfort of your couch or bed. This and more is possible at the LINQ Hotel connected suite, where WeChatters can also control how devices interact with each other. For example, users can pre-program the “sleep” scenario on WeChat so that once selected, the room automatically switches off the lights, closes the blinds and curtains, and locks the door.

While Facebook recently unveiled its vision to turn the Messenger app into an AI-powered personal assistant, the kind of functionality that already exists within WeChat is testament to just how far ahead innovation in the messaging space is in China compared to in the West.

And it really sums up why Chan, in her posting on the a16z blog, said, “WeChat points to where Facebook and other messaging apps could head… [it] indicates where the future of mobile commerce may lie… [and it] shows what it’s like to be both a platform and a mobile portal (what Yahoo could have been).”