On-demand shipping service Shyp has hired former Pinterest’er Everett Katigbak as its brand creative lead. He’ll be tasked with, among other things, extending the company’s brand identity beyond its digital confines and out into the world. 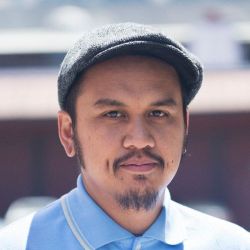 Since its founding in 2013, Shyp has operated like most startups do when it comes to recruiting talent: Find the best engineers to help innovate in an industry that has become stagnant. Shyp has managed to attract customers to its shipping solutions but the mystery has remained: What is Shyp and what does the brand represent? Answering this question is Katigbak’s mission, and we’re told he will be working with vice president of marketing, Lauren Sherman, to help tell that story.

Katigbak has no shortage of experience dealing with branding in the technology space. He was at Pinterest for nearly three years, and helped develop the interest-based social network’s core brand strategy. As he notes on his LinkedIn profile, besides crafting Pinterest’s narrative, he led a team of creatives to bring the story to life through the use of videos and experiential marketing campaigns.

Prior to that, Katigbak spent five years as part of the communication design team at Facebook, where he also helped shape the company’s brand narrative and created some of the early brand expressions. Of note, he’s billed as a main designer of several Facebook campuses, and worked with legendary architect Frank Gehry on the social networking company’s newest campus in Menlo Park, California.

As Shyp continues to expand beyond San Francisco to Los Angeles, New York City, and Miami, it needs to find a way to capture the hearts and minds of the mainstream audience. It faces an uphill battle against well-established incumbents like UPS, FedEx, and DHL. Has anyone outside of tech even heard of Shyp?

The company has raised $62.1 million in venture funding over the past couple of years and as it expands, it will need to present a cohesive message and a well-formed and appealing narrative. The hope is that Katigbak’s expertise will help make Shyp as endearing a brand as Pinterest and Facebook.