Apple announced an array of new products at its big show at the Bill Graham Civic Auditorium in San Francisco today.

Of course the new devices all looked dead sexy in the on-stage demos. The real story often comes during the hands-on time after the event. I touched all the new products today, and found a lot to like.

It was not a day for blockbusters, however.

I was skeptical that this feature would make a big difference, but after I began using it in different scenarios, I saw that it could save lots of time and clicks. 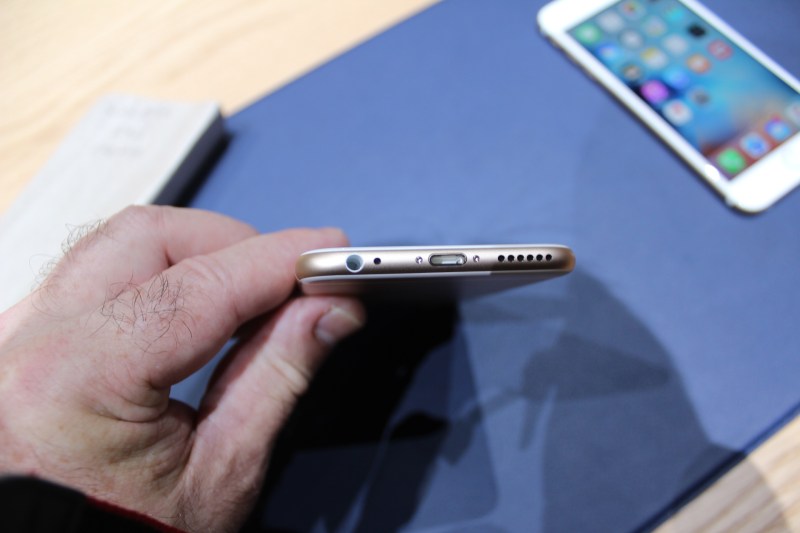 Case in point: I’m often bugged by having to open emails to see what they’re about, only to find out they’re not important and having to close out of them again. 3D Touch lets you press and hold on an email in your list and “peek” at its contents. After you remove your finger from the screen you’re still looking at your main inbox view.

You can also press and hold on a flight number listed in a message to drill down to more information on the flight. Press down on a date listed in a text message and a view of your calendar pops up, then disappears after you lift your finger again. 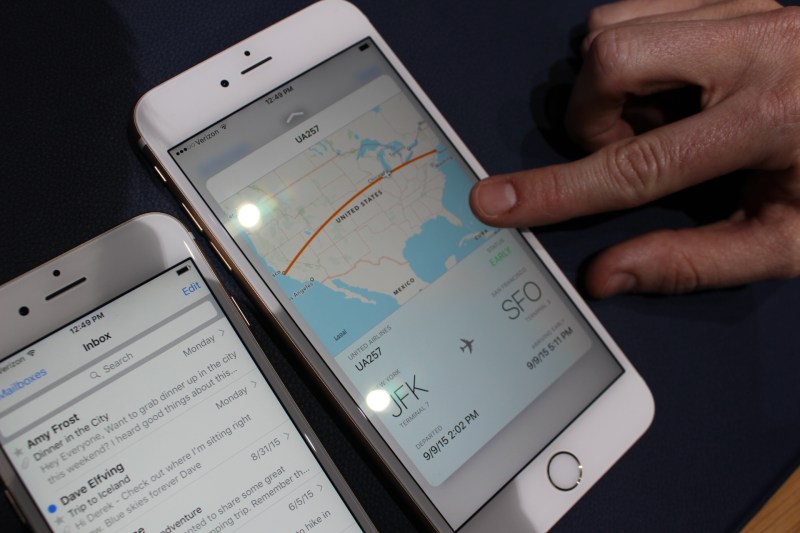 You can also use 3D Touch to view options under an app icon on the front screen. For example, pressing and holding on the Mail app will show you how many new emails you have without making you launch the app itself. You also see quick links to oft-used mail functions like Search or Compose. 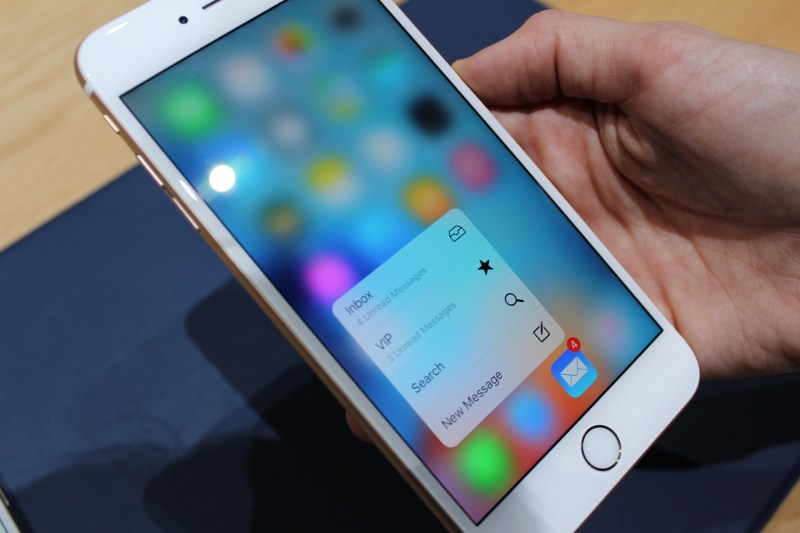 I wanted to try shooting pictures with the new camera, but for some reason Apple PR would not allow that. The photos that were already on the phone looked noticeably sharper than the ones shot on my iPhone 6, though. When I zoomed in on the shots, the grainy, washed-out look didn’t appear as quickly as it does on mine. 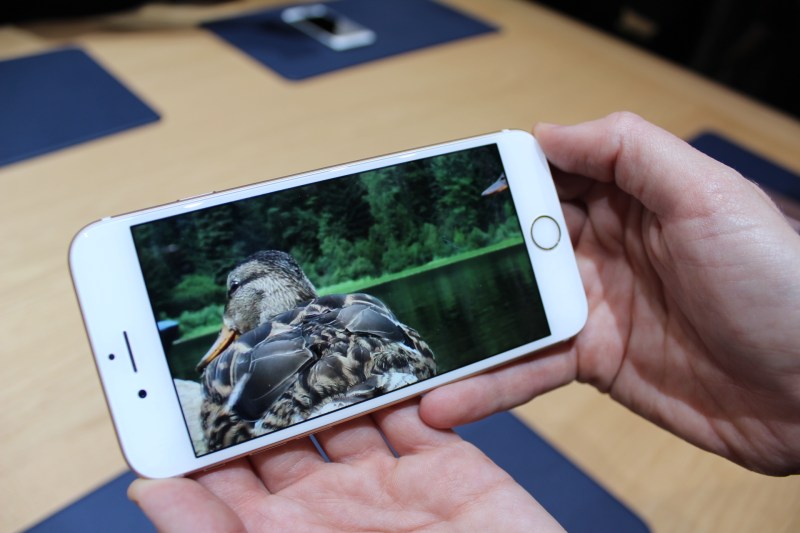 The iPhone 6s — with its new A9 chip — seemed to have a lot of horsepower. It was very responsive to commands, and game graphics rendered very smoothly and quickly. Incidentally, you can use Touch to zoom in and out on some game scenes. This also worked well during the hands-on demo.

It’s big. It’s really big. That was my first reaction to the thing. The new iPad Pro is impressive for its size, and for some types of users the 12.9-inch screen will be very useful. During the on-stage demonstrations today, Adobe showed how designers might be able to create and collaborate on the iPad Pro. That makes sense. Apple was also demonstrating how an auto-CAD app could be used on the iPad to create more complex engineering designs. The iPad Pro screen has 5.6 million pixels — more than enough to get down to the fine details of a schematic, say. 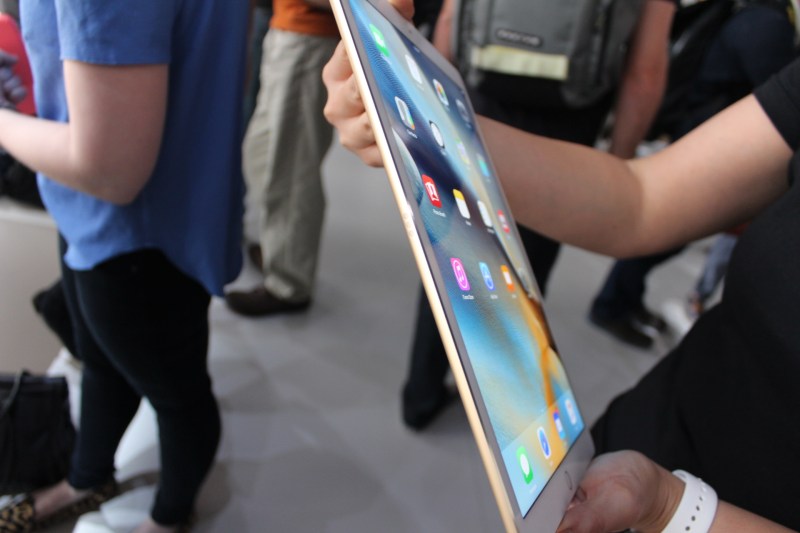 Apple says it redesigned its iMovie app for the new tablet. As I swiped to scroll through the frames of a movie, the smoothness and responsiveness was noticeable. The internal clock that tells pixels when to light up is borrowed from the iMac, an Apple rep told me. 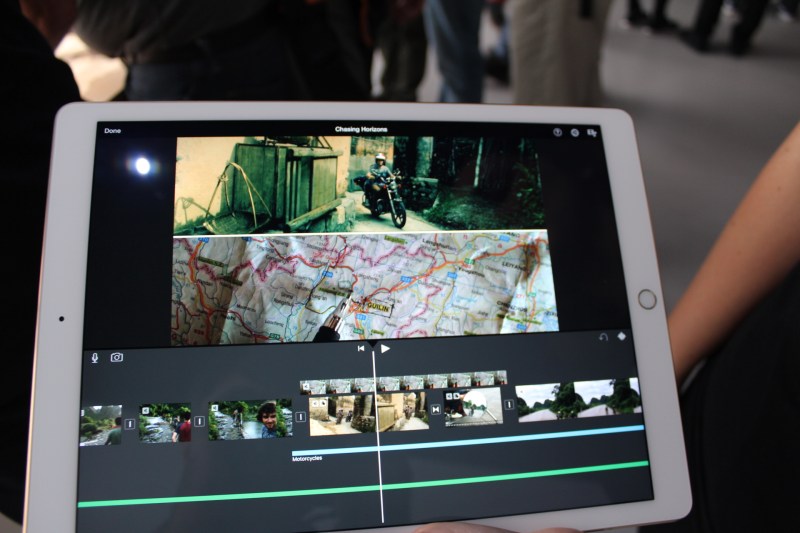 And of course the iPad Pro is the perfect vehicle for the new multi-function features in iOS 9. It was easy to split the screen and run two apps side-by-side, and there was ample room to have a natural (not cramped) experience inside either of the apps.

Here I am watching Mad Max on one side of the screen and studying dinosaurs on the other. 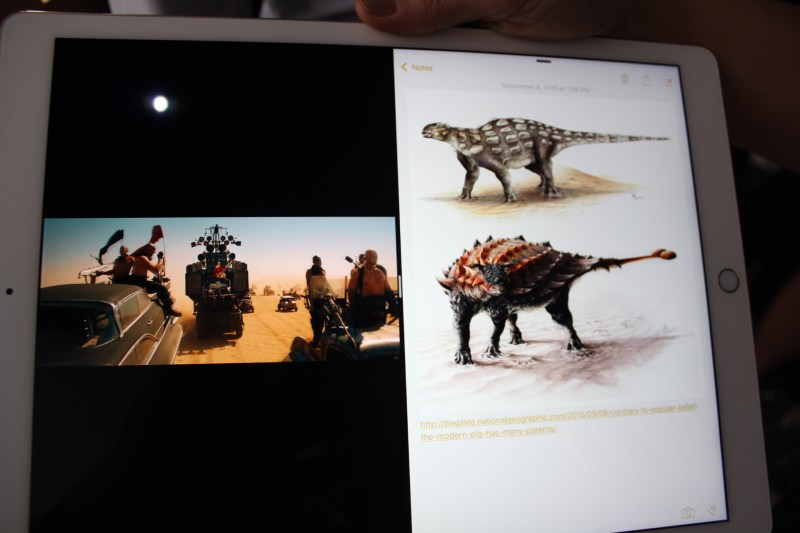 The utility of the iPad Pro comes through even more when using the accessories Apple announced today.

The Apple Pencil is a simple stylus that can be used to draw in graphics apps, or annotate in collaborative apps. The pen has a force sensor and two resistors in the tip to detect both the pressure being applied by the user and the angle of the pen in relation to the screen. The more pressure I applied to the pen on the screen the darker the line that appeared below the tip. The stylus uses the same logic you would find if you were using a paintbrush tool. 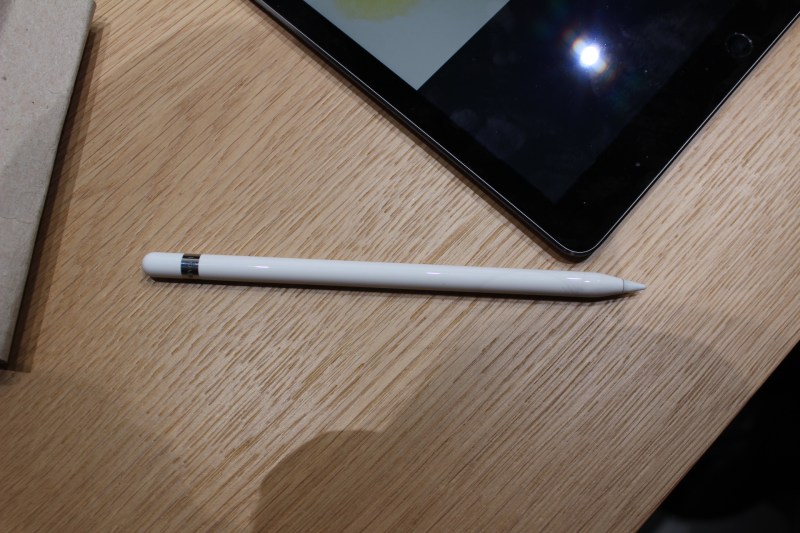 The $99 Apple Pencil is a simple device. There are no buttons on the side. It doesn’t remember your strokes. But what it does, it does well. The Apple Pencil has some weight to it — it’s not just a piece of plastic. This is important for creating a natural feeling while drawing. 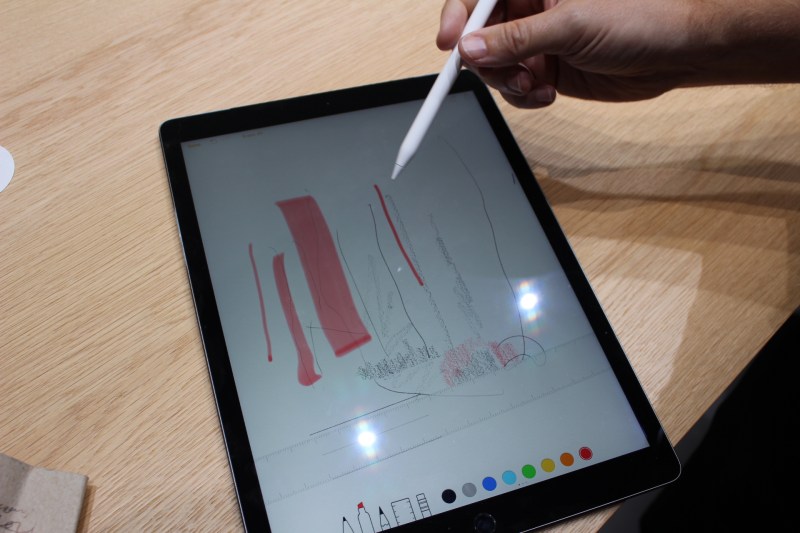 Next, I checked out the new keyboard accessory for the iPad Pro. The thing also acts as a tablet propper-upper and protective case for the iPad Pro. It’s made out of a “custom-woven fabric,” as an Apple rep called it, and the material had a latex quality to it. The keys are made of the same stuff, and are raised on the surface of the keyboard by perhaps an eighth of an inch. The keyboard connects to the iPad though three contact points that themselves connect with three small metal contacts on the side of the iPad. The keyboard gets all of its power through that connection. 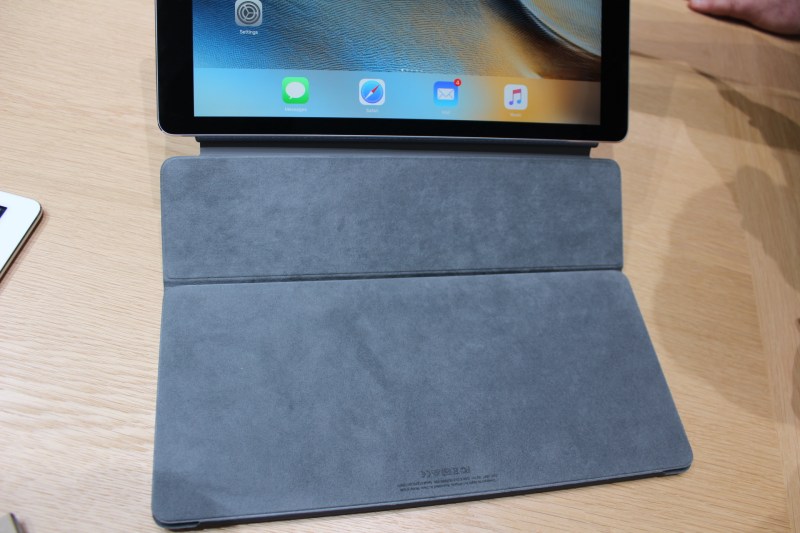 I have never been very impressed with the actual typing performance of most add-on keyboards, and I wasn’t overly impressed with this one. Typing on those keys would take some getting used to — I made lots of typos while I was testing it out. 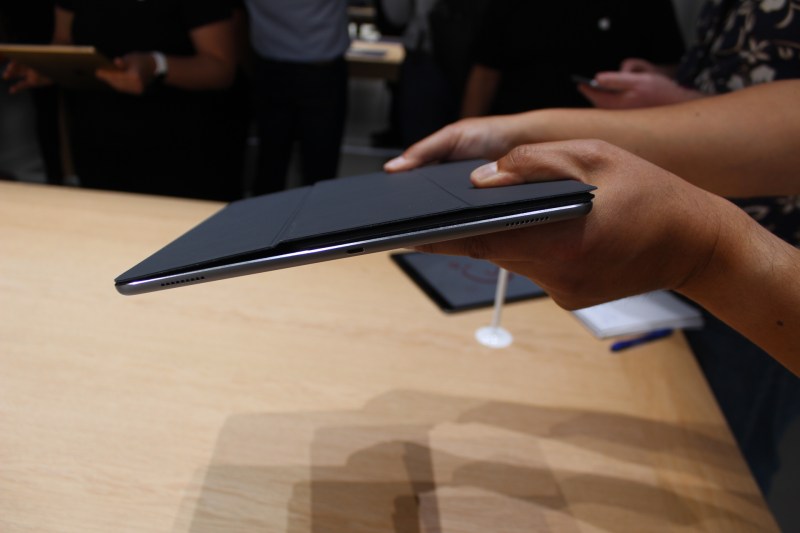 Last, but certainly not least, is the Apple TV. Apple was allowing media people like me far less contact with the new streaming device than with the other devices. I wasn’t allowed to get within three feet of it,  nor was I allowed to take pictures of the back.

I was permitted some hands-on time with the new remote control, which is more compact than I expected. The whole top-third of the device is covered by a black glass touchpad. This is the primary means of navigating the Apple TV user interface and making selections. The whole touchscreen is actually a big black button that you can press down on to make selections.

The remote is also used to control volume and activate the Siri personal assistant. 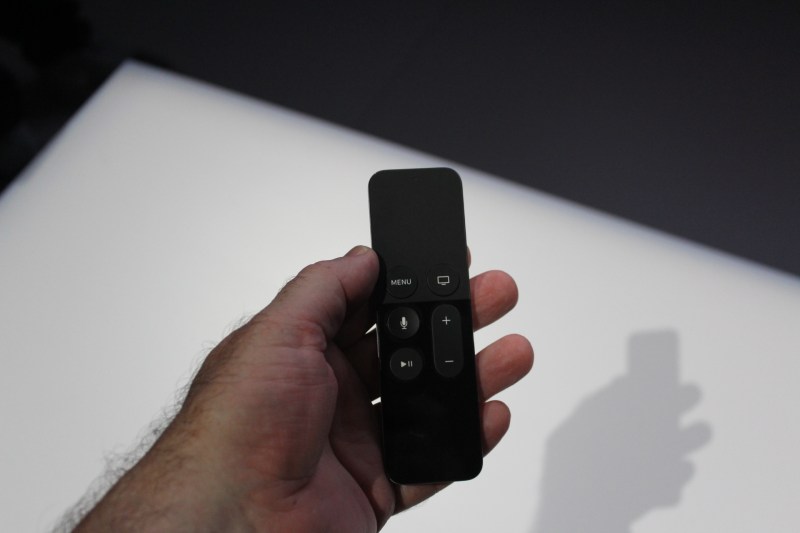 I played the Apple rep a game of Crossy Road (which I thought was kinda like Frogger, but with chickens). I was impressed with how easy it was to control the movements of the game using the touchscreen at the top of the remote. I used side-to-side movements with my thumb over the touchscreen to move the chicken, then pressed the screen to make the chicken jump. It worked well, and I caught a hint of how addictive that game could be when played from the couch. Whole days could go by unnoticed.

The remote runs on an internal battery. It can be recharged via a Thunderbolt port at the bottom edge, just like a phone. 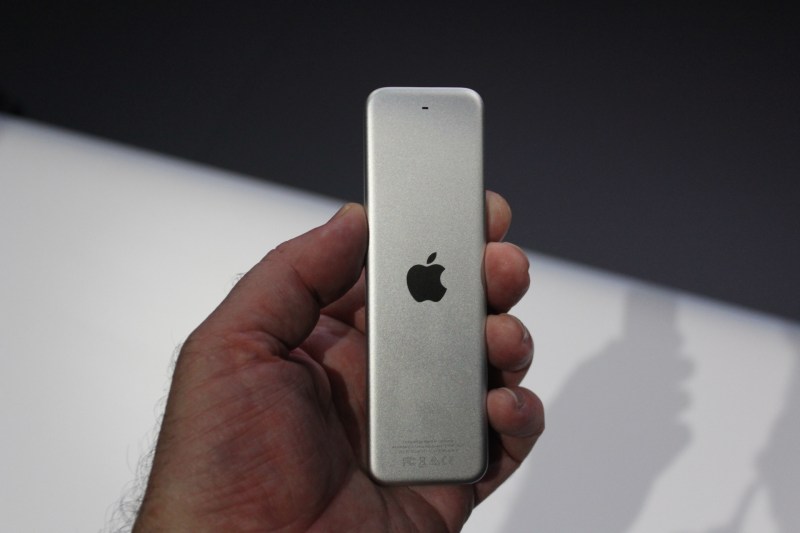 I found the setup of the user interface to be logical, even simple. The main sections are Movies, TV, Apps, Photos, and Music. The first three are, to me, the meat and potatoes of Apple TV, while I think I might view photos and listen to music on the device only occasionally.

I was impressed with how well Siri was able to search for content. She can do “nested” searches for video content –in other words you can ask her to find something like “all Crispin Glover movies from the 80s,” and then do a second search to narrow the results down to just the movies in which Glover starred.

I didn’t ask Siri any terribly hard questions, but basic content searches seemed to work well. We will have a full review of Apple TV, in which we will put Siri through her paces. 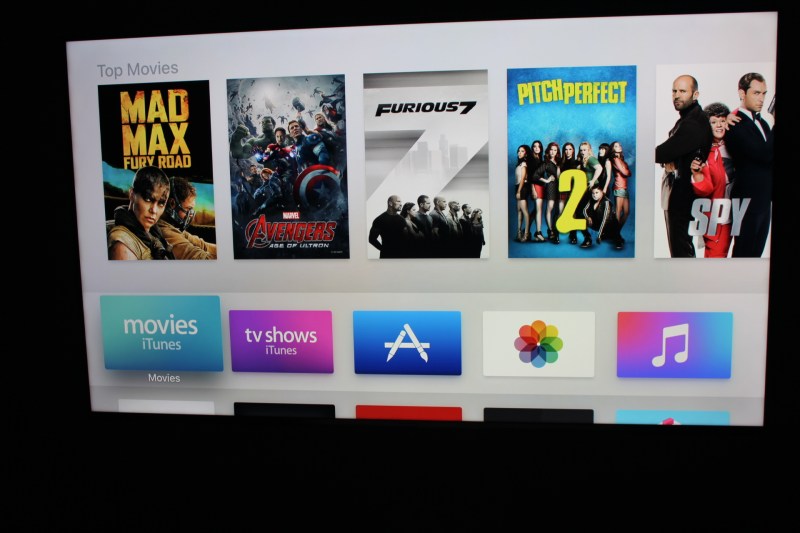 The Apple TV device itself is thicker and wider than its predecessor. It needed a bigger form factor to accommodate the larger video storage requirements, and a bigger A9 chip to run apps, especially games. 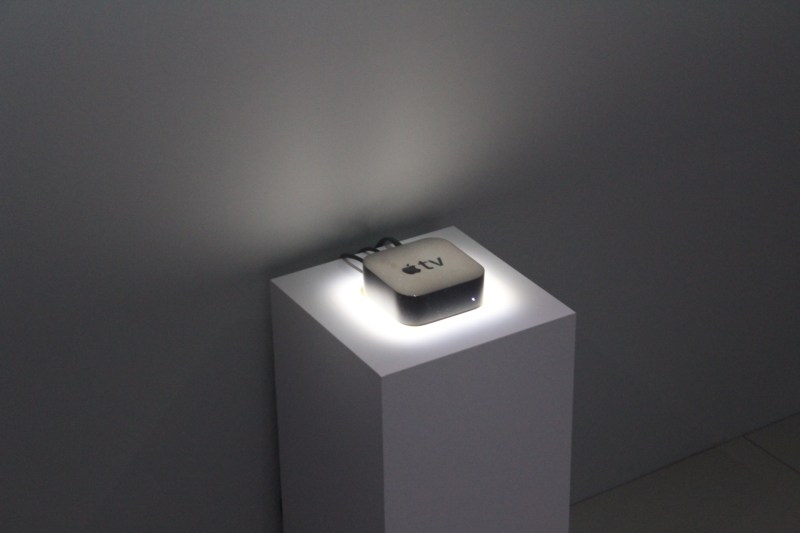