The NFL season is here, and for many fans, this means it’s time to indulge in one of their favorite pastimes: talking smack. And Facebook wants to play an integral part in that game-day experience.

Part of Facebook’s effort is the extension of a real-time event hub that debuted during Super Bowl XLIX. Through this, users could watch all of the latest chatter taking place on the social network while viewing every play right on their television or while at the game. And over time, Facebook has extended this second-screen capability other large events like the FIFA World Cup, and to other sports leagues, including the NCAA, NBA, MLB, and NHL. 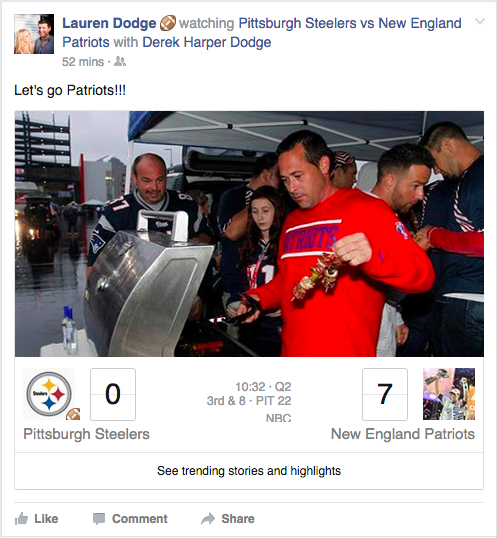 It’s no surprise that with the first game of the 2015 NFL season last night, Facebook seems to have enabled this feature for football games. Users who shared that they were watching the Pittsburgh Steelers lose to the world champion New England Patriots had their postings feature a real-time scoreboard.

When you click on the post, it shows you that game’s hub that not only lets you see all the fan interactions taking place in real time but also the score, play-by-play, and other media being shared by everyone watching or at the game. Additionally, you’re able to follow your favorite teams to know more about what they’re posting. 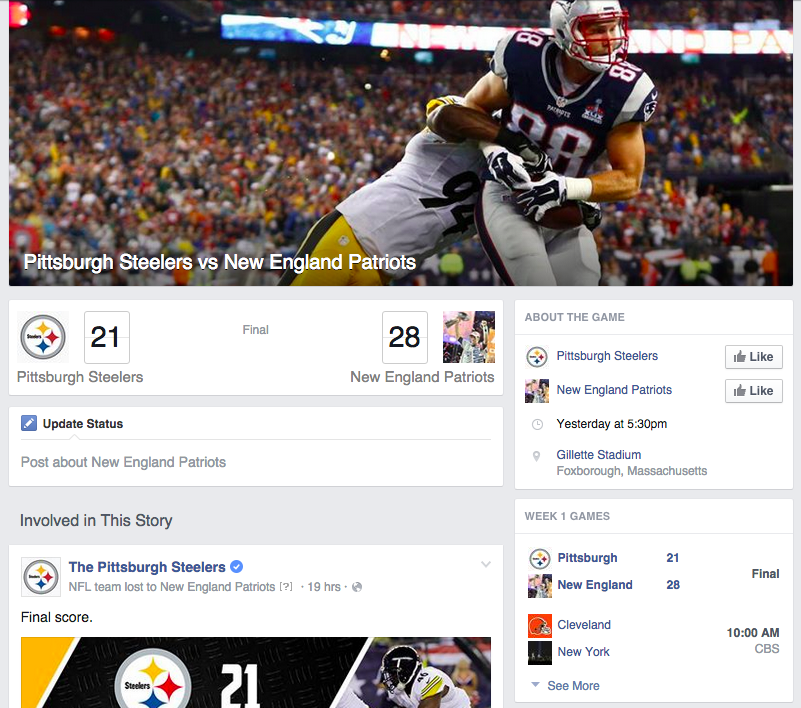 As Facebook seeks to be a dominate player in the second screen space during this year’s football season, it seems to be in a much better position than most others, although it doesn’t have the NFL partnership anymore — that went to Twitter.

How engaged are Facebook users when it comes to the NFL? The social networking company tells VentureBeat that out of the nearly 50 million people who have liked an official team page, more of them appear to be more optimistic about the Kansas City Chiefs this year while the San Diego Chargers? Not so much. What about the Patriots’ odds of winning? They rank second-to-last, according to Facebook’s data. This was all data the company analyzed in the preseason prior to the Patriots beating the Steelers — how this changes now with Brady in the picture remains unknown. 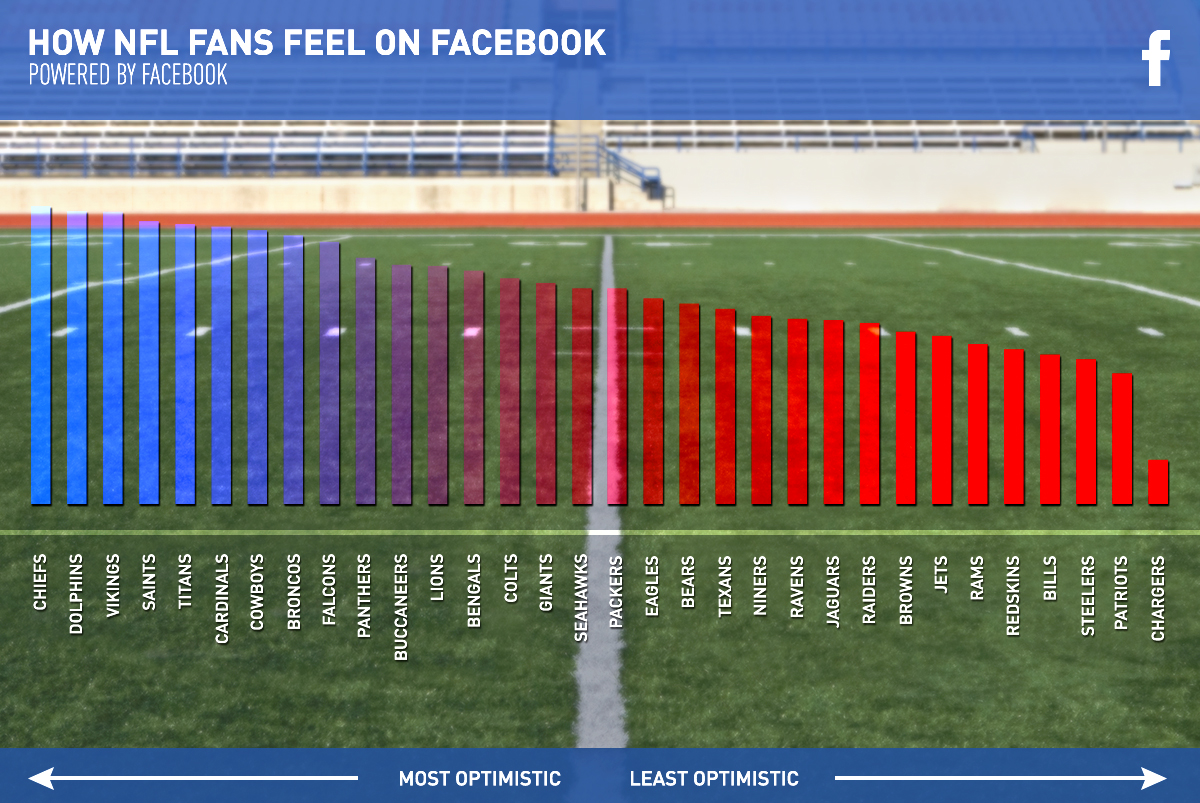 But like most polls, the feelings people have about their teams and players is often temporary and likely changes as the season progresses. So as fans continue to converse, post, and share media on the social network, Facebook should be able to tap into that to better understand the mind of an NFL fan.

When you look at all of the technology at our disposal to converse about what’s on television, where it seems to have the most legs is perhaps with Facebook: not only can you share what you’re watching, you can also be like their page, and much more. All of this gets shared not only with your friends but also millions of like-minded fans all eager to talk about what’s going on. 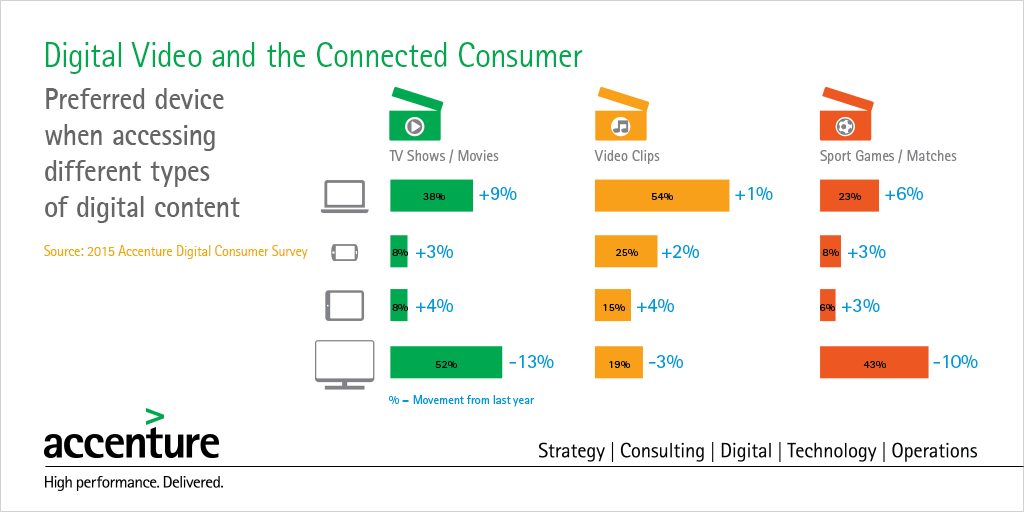 In an Accenture report released earlier this year, 10 percent fewer people around the world watched sports on a TV screen in 2014. Viewers are changing their consumption habits and are turning to new ways to find out what’s happening out on the field. The preferred devices when it comes to sports include laptops, mobile devices, and tablets, not televisions.

When it comes to the second screen, another opportunity presents itself: fantasy sports. While there’s certainly smack talking going on, there’s also an ability for viewers to monitor how well their players are performing and its effect on their fantasy teams.

None of the top players such as Twitter, Facebook, Yahoo, or Google/YouTube have conceded the second screen race for market supremacy yet when it comes to sports, so it’ll be interesting to see where users are flocking to. Every one has their own offering, whether it’s Twitter and its soon-to-be released Project Lightning initiative, Yahoo’ sports section, or YouTube’s video capability, there’s certainly plenty of places to get your sports fix.

In the end, however, when it comes to the second screen, how will all of this technology help you win your fantasy sports league? That is, after all, what matters, right?