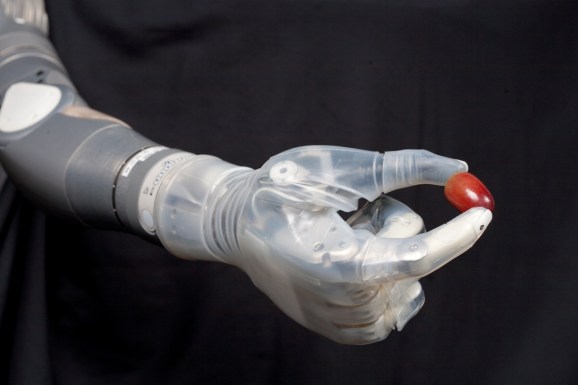 Here’s something you might have missed: the latest mind-controlled, robotic prosthetic arm can communicate the sensation of touch back to a user’s brain.

You read that correctly. While the whole world was foaming at the mouth over a moderately improved iPhone this week, the Washington Post reported on an actual breakthrough.

At a conference hosted by the Defense Advanced Research Project Agency (DARPA), a group called Revolutionizing Prosthetics demonstrated a mind-controlled prosthetic arm that allows victims of paralysis to regain their sense of touch.

“Prosthetic limbs that can be controlled by thoughts are showing great promise, but without feedback from signals traveling back to the brain it can be difficult to achieve the level of control needed to perform precise movements,” DARPA program manager Justin Sanchez said. “By wiring a sense of touch from a mechanical hand directly into the brain, this work shows the potential for seamless bio-technological restoration of near-natural function.”

With electrodes implanted directly into the brain of a man paralyzed by a spinal column injury, the subject was able to sense when researchers touched different fingers on the prosthetic hand.

“At one point, instead of pressing one finger, the team decided to press two without telling him,” Sanchez said. “He responded in jest asking whether somebody was trying to play a trick on him. That is when we knew that the feelings he was perceiving through the robotic hand were near-natural.”

Take 5 short minutes to let Sanchez enlighten you. The future is absolutely amazing and it only has 7,000 views:

Makes you feel a little silly about all the rabid iOS 9 coverage, right?