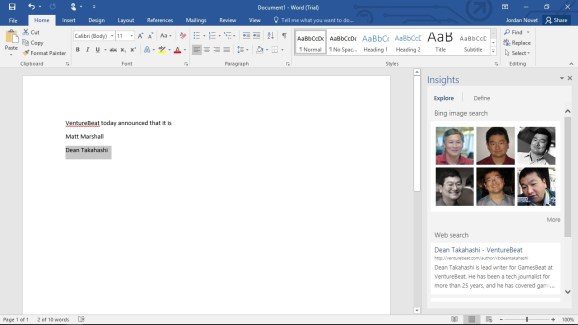 Smart Lookup in Microsoft Word in Office 2016 for Windows 10.

Once you enable the tool — by selecting it from the right-click menu or typing “Smart Lookup” into the Tell Me box — it sits on the right side of the screen in Office applications like Outlook, PowerPoint, and Word.

“Smart Lookup lets you fact-check and learn more about terms contained in emails and other documents without leaving your Office app,” the Bing team wrote in a blog post on the news. “Select the text in question and Smart Lookup uses the surrounding content to deliver contextually relevant results, including Bing’s great image results, web searches and more.”

This builds on Microsoft’s earlier efforts to integrate Bing into Office. Back in December, Microsoft announced Insights for Office, which allowed people to search with Bing while using Word Online.

More generally, this fits into Microsoft’s attempts to turn Bing into an intelligent application component. Microsoft’s Cortana personal digital assistant taps Bing for certain queries in Windows 10. The Bing knowledge and action graph API provides information from Bing for third-party developers to use, while Bing for Android now provides contextual web search and deep links into other apps without requiring you to switch out of the app you’re currently using.

Google has been working on this same functionality with Now on Tap. And earlier this month Google announced the integration of Google search into Google Docs. Importantly, the capability works on Android mobile devices.

Note that when you use Smart Lookup in Office 2016 apps, you’re letting Microsoft have a look at some of the words in your documents. “To bring you relevant information, we send data to Bing that includes your highlighted term and some highlighted content,” Microsoft says when you turn on Smart Lookup for the first time. The company provides links to its privacy statement and then prompts you to click “Got it” to get the feature running.