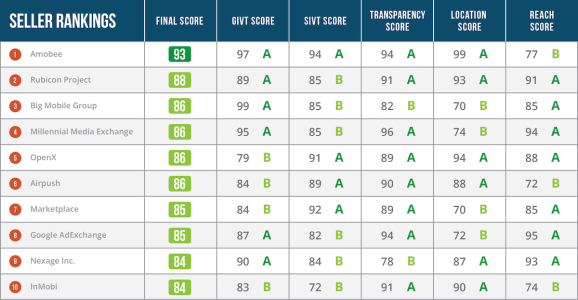 Fraud protection firm Pixalate is out today with a first-of-its-kind Good Housekeeping Seal of Approval for sellers of in-app ad space.

Of course, the Santa Monica, California-based firm isn’t calling it that. Instead, the listing is called the Mobile Seller Trust Index, or MSTI. The monthly index ranks supply-side ad platforms (SSPs) — which represent the ad space inventory from app publishers — by evaluating such factors as legitimate inventory, fraud, transparency, and location.

As on the Web, ad inventory in apps can be provided by shady publishers who happily generate fake ad traffic using software bots to load ad impressions. Advertisers often pay on the basis of number of impressions, making this kind of fraud a costly racket. Pixalate says its own data shows how large the problem is — 38 percent of in-app mobile ad inventory is fraudulent.

Khalid Razzaq, VP of product at Pixalate, compared this ranking to Amazon’s system, where users can rank sellers as well as products. Here, he said, the seller (the in-app ad inventory platform) and its product (the ad space inventory) are both evaluated. Traffic fraud, he pointed out, comes in through the inventory side of digital advertising.

Pixalate intends for the ranking to help advertisers figure out which publishers and ad supply platforms are best for the factors measured. Perhaps more importantly, this index isolates “the players that are not doing the right thing,” Razzaq told me.

In the ranking above, Reach represents the number of unique users, General Invalid Traffic (GIVT) is software-created traffic pretending to be users, and Sophisticated Invalid Traffic (SIVT) covers hijacked devices, URL spoofing, and other sources of false impressions.

Transparency reflects the percentage of device and user information, and Location is the availability of location data.

Ad exchanges and other parts of the digital ad ecosystem have been receiving criticism for not screening more carefully for traffic fraud. The new ranking — which Pixalate says is the only one of its kind — is obviously intended to drive more business to the most vigilant, thus create commercial pressure on the others to get their act together.

This isn’t Pixalate’s first foray into rating the ad industry. In December, it introduced its Global Seller Trust Index for desktop and mobile web advertising.

Pixalate points to additional issues affecting the quality of in-app ads. For one thing, ten of the 125 evaluated mobile app SSPs control over 80 percent of the inventory, meaning there’s a centralization of market power that is currently driving the mobile ad industry.

Additionally, over half of the inventory has no mobile device ID, limiting tracking/targeting and raising questions about whether actual devices are involved at all — or whether that traffic is generated by bots. And location data, which is growing as a key attribute of app functionality, is present in less than a third of the inventory.

Pixalate also pointed out that over a third of in-app ad traffic fraud is coming from data centers, which are apparently running mobile app simulators that create fake inventory as well as fake traffic.