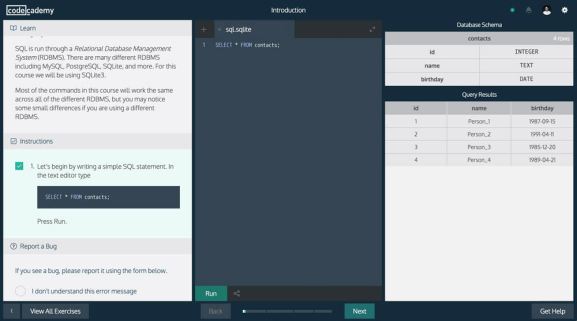 Codecademy is looking to expand its online learning platform and has begun partnering with industry firms to bring new technical languages to its users. The company has partnered with Periscope (no, not the livestreaming one) to bring SQL-centric training programs to its students.

Known as a place to learn programming languages like HTML, JavaScript, jQuery, PHP, Python, and Ruby, Codecademy has attracted the attention of over 25 million people from around the world. But programming has a place beyond just building simple websites, applications, and other interactive products. SQL can be used to analyze data, interpret statistics, and more.

With an understanding of SQL, programmers should be better-equipped to build more complex applications, which hopefully will help them build tools and products to solve more of the world’s problems.

Topics that users will be taught include understanding relational databases, statements, and other manipulations. They’ll also be introduced to queries, aggregate functions, and multiple tables.

Teaming up with Periscope makes sense, as Periscope not only offers well-executed visuals, but also a popular SQL editor that can be incorporated into Codecademy’s program. Building on this base, Codecademy has solicited contributions from experts in the field to help develop its curriculum.

Partnering with Periscope is only the beginning for Codecademy, as it plans to form several other collaborations in the next few months. In order to expedite this process, the company says that it has been working on creating tools to facilitate course creation.