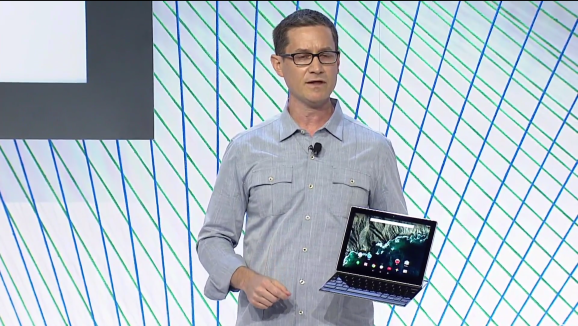 In an event that was supposed to be all about the latest Nexus smartphones and new Chromecast devices, Google today showed reporters a new tablet in its high-end Pixel line.

The new Pixel C would have been a complete surprise, were it not for a report on the launch of the device yesterday from Android Police.

The aluminum device will be available in time for the holidays on the Google Store, starting at $499 for the 32GB model and $599 for the 64GB model. The integrated Bluetooth keyboard, which will charge in the background while affixed to the screen, will cost $149, Google director of product management Andrew Bowers said.

The Pixel C comes with an Nvidia Tegra X1 quad core chip, 3GB of memory, a 308 pixel-per-inch (PPI) screen, and a comfortable keyboard inspired by the Chromebook Pixel, Bowers said. Indeed, the keyboard might well be the best innovation here, as it provides more than two months of daily active usage without a charge, Bowers said today.

On the outside, the new Pixel C will have the same multicolor light as the one on the Chromebook Pixel, and just under that light are four microphones to detect speech commands.

“Now you can have voice interactions from across the room,” Bowers said. While the inclusion of multiple microphones might help ensure the accuracy of its voice search, the company has been working hard to improve the accuracy of its voice search using artificial intelligence, and that increased intelligence should be on display in this feature in particular.

Above: The Google Type C tablet.

The device seems like a bit of a response to Microsoft’s Surface series and the newly released iPad Air, but we’ll have to see when we try it out.

Google first established its Pixel series in 2013, with the launch of the $1,299 touchscreen Chromebook Pixel laptop running Chrome OS. That device got a refresh, a price cut, and a USB Type-C charger in March — but it has been more demonstration project than top seller.

The difference here is that the Pixel C is running Android, not Chrome OS, just like tablets such as the HTC-built Nexus 9 or Samsung’s Galaxy Tab S2.