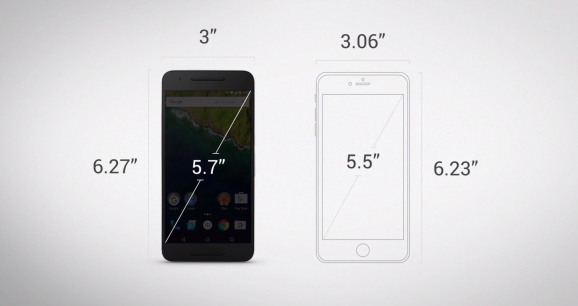 Google today unveiled two new Nexus flagship smartphones, the 5X from LG and the 6P from Huawei, following weeks of speculation about the devices.

It’s the biggest news coming out of a press event today in San Francisco’s Mission District. Other news expected to come out of the event include new Chromecast gadgets and the final version of Android Marshmallow, which will be running on these two Nexus phones.

The 12.3-megapixel camera on Huawei’s Nexus 6P in particular carries the best camera that Google has ever included in a Nexus device, Dave Burke, vice president of engineering for Android, said onstage at the event. The device’s 8-megapixel front-facing camera can make pictures in HDR+ mode, “so you can get the world’s best selfies on your phone,” Burke said.

Huawei’s Nexus 6P “can produce stunning images, even in the toughest of lighting conditions,” Burke said.

The indentation on the back of the Nexus 6P is, of course, the fingerprint scanner that provides immediate authentication and Android Pay — what Google calls the Nexus Imprint.

The 5X will come in Carbon, Quartz, and Ice Blue. The 6P will be available in Aluminum, Graphite, and Frost.

We haven’t had time to try out the devices yet, but the specs suggest that both will be solid choices for those seeking high-end Android phones. Also in that category: the recently released 5.7-inch Moto X Pure Edition.

The aluminum Huawei-made 5.7-inch Nexus 6P — the first Nexus handset to come from the Chinese electronics manufacturer — is the successor to the 5.96-inch Nexus 6 that Motorola brought out last year.

Because they’re part of the Nexus line, both of these new phones should receive monthly over-the-air (OTA) security updates from Google.

Both phones will begin shipping in unlocked mode from the Google store in October and will work across major networks in the U.S. and in other countries.

Both of the new Nexus devices will also get 90 days of free access to Google Play Music, as well as a $50 Google Play credit for users in the U.S. And for a premium price, the devices can be part of a new two-year Nexus Protect program to keep people working in the event of mechanical breakdowns — you can receive a new device as soon as the next business day.

Find all of our coverage of today’s event here.