It took 40 years, but in 2015 the NBA’s Golden State Warriors won their latest league championship. And while the Bay Area celebrates this victory, it’s worth looking at the team’s campaign to see how they continue to rally fans to #WarriorsGround.

“It’s all about how you enhance the experience,” Kenny Lauer told VentureBeat as we toured Oracle Arena, the Warriors’ home in Oakland, California. As the team’s vice president of digital and marketing, Lauer is the man in charge of helping generate excitement for the game beyond this nearly 20,000-seat arena.

“It’s not just about basketball, but about being an entertainment company…people want to be entertained— how will their lives be better with the Warriors in it?” he said.

But in this center for innovation that the team calls home, another question comes to mind – how was the Warriors’ season better with technology in it? Technology may not have put any points on the scoreboard, but it plays a critical role in the relationship between the team, the fan base, and the community.

What Lauer hopes to achieve is a balance between the physical and digital worlds to completely re-imagine the fan experience. It’s not about grabbing a ticket and heading to a Warriors’ game anymore, but about the experience of making a purchase in the team store, following the season on social media, getting to know the players, and, of course, sharing your enthusiasm with the world. It’s certainly not necessarily easy to orchestrate, but the Warriors seem to have an experienced team in place — and we’re not talking about any of the 12 players on the team.

Previously a digital experience VP at marketing agency George P. Johnson, Lauer leveraged digital technology to help companies connect with their customers. The firm has worked with brands such as Coca-Cola, CoverGirl, IBM, Cisco, Honda, Toyota, and Under Armour.

Alongside Lauer is Daniel Brusilovsky, who is tasked with establishing new digital initiatives for the team. As someone deeply connected in the technology space, experimenting with new technologies isn’t new for Brusilovsky. He’s participated in several startups, including Imoji, Ribbon, Teens in Tech, and Qik, and has also worked on client strategy at creative agency JESS3. He also did a stint at Highland Capital, looking at potential new investments for the VC firm. 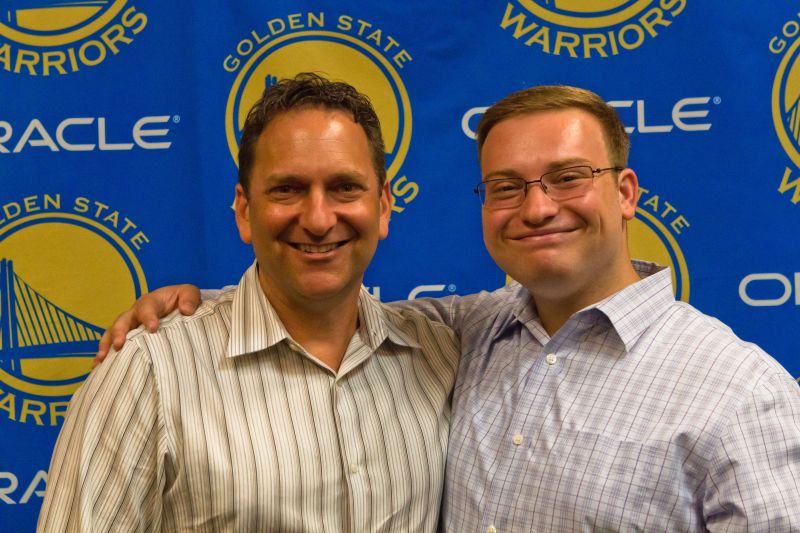 In 2013, Lauer joined the Warriors to take over day-to-day management of all digital initiatives. Brusilovsky’s role is geared towards metrics — deploying technology to get people to upgrade their seats (from the nosebleeds to those courtside), and to spend more on merchandising and the like.

Both bring a lot of experience to the Warriors, but coming up with new technological feats isn’t as easy as you’d think. One of the biggest challenges that the Warriors face is the fact that they don’t even own the arena, which means it’s difficult for the team to create a great experience around the concessions, store, seats, and more. However, both Lauer and Brusilovsky remain undeterred, and thus far seem to have created a pretty compelling fan experience.

In sports and entertainment, you generally get a cookie-cutter experience, Brusilovsky told us. The challenge is creating a personalized experienced for each of the Warrior’s more than 14,000 season ticket holders. That’s the real problem Lauer and Brusilovsky face, not whether the Warriors will be using Oculus Rift to promote the team.

“How do you make the story around the fans?” Lauer asked.

As we navigated our way through the building, we asked what technologies the Warriors are using inside Oracle Arena. Brusilovsky said that the team store was one of the first in the league to implement Apple Pay, even holding a press conference  in which Apple’s senior vice president of Internet Software and Services, Eddy Cue, stopped by to demonstrate how it works. 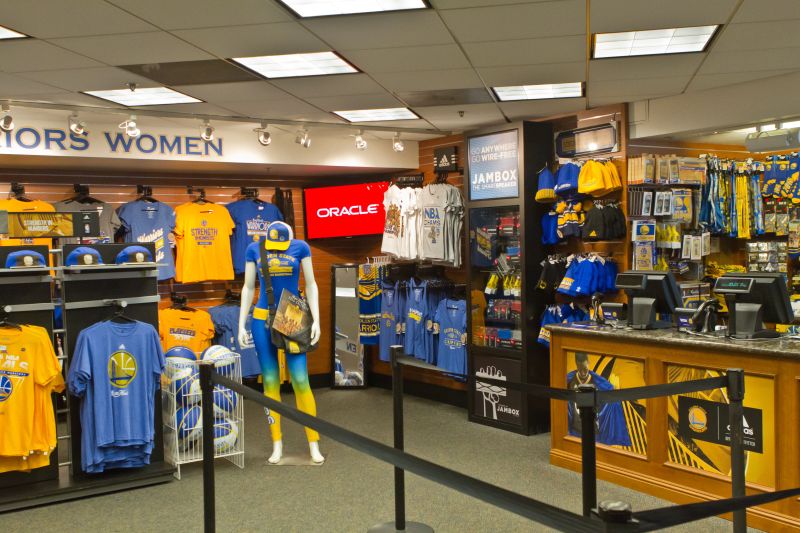 Oracle Arena is also filled with sensors to help the team connect with fans. Brusilovsky pointed out to us several of these inconspicuous devices that are directly tied to the Warriors’ mobile app. When you’re in range, the app can be prompted to display you messages, such as a specials in the Warriors’ store or even a video greeting from one of the players welcoming you to the arena.

Brusilovsky shared that beacons had been discussed internally, but that it wasn’t until they were deployed and began generating money and data that the team fully realized their potential. For the next season, he told VentureBeat, the Warriors will have a data team as part of the decision-making process for their initiatives.

There’s even an Instagram installation within the arena that features media captured by fans and shared using a specific hashtag. As our visit coincided with the Ringling Bros. and Barnum & Bailey circus visit, the photo wall had been redirected, but once the next basketball season begins, it’ll once again feature the Warriors. 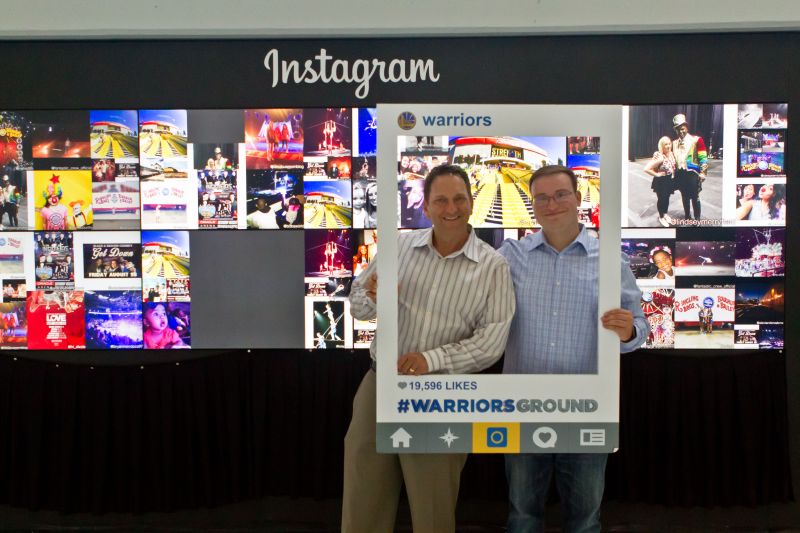 The Golden State Warriors were one of the first teams to experiment with Google Glass. The team debuted an app for the wearable device in 2014, allowing users to not only watch the game through the device, but quickly reference player statistics and more from their seats.

“You have to take risks and try new things,” Lauer said. It’s all about how to make technology an enabler of the fan experience and of basketball. It’s about helping to further the story and show fans more than what goes on for the 48 minutes on the court. To complement this risk-taking strategy, the Warriors use a beta program before they implement any new technology. The test group is the team’s D-League, the Santa Cruz Warriors.

The Warriors have quite a bit of autonomy in testing new technology, the results of which are then passed along to the NBA, and can be disseminated to the rest of the league. Of course, they have to avoid infringing on network television contracts.

As much of what we were shown on our visit was specific to Oracle Arena, everything will likely change when the Warriors move into their new arena in 2018. When asked what specifically will be included from a technology standpoint, Lauer declined to answer, saying that it would likely depend on what’s trending among fans.

The pursuit of data 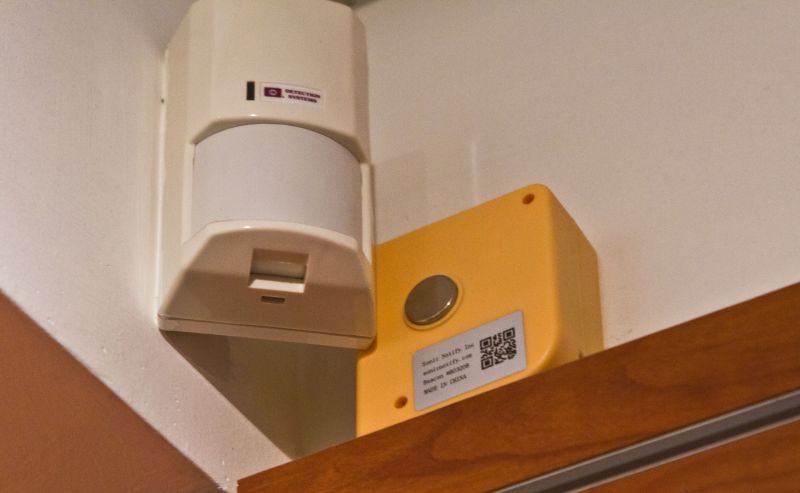 Above: Sensors around Oracle Arena used by the Golden State Warriors to better engage fans during the game.

In keeping with current trends, the Warriors plan to further leverage data to improve the fan experience. Third-party companies like VenueNext are finding steady business from organizations and stadiums eager to build a better off-field experience. John Paul, chief executive of VenueNext, believes that the market “is ready for what we are offering and can scale from live sporting and entertainment event locations to hotels, transit centers, and theme parks.”

A key innovation here appears to be a mobile application which the Warriors have and that the National Football League’s San Francisco 49ers have deployed in their new stadium in Santa Clara, California. That app is run by VenueNext and not only lets fans order food and other services right from their seats, but gives the team a better idea of what’s going on in the stadium at all times. 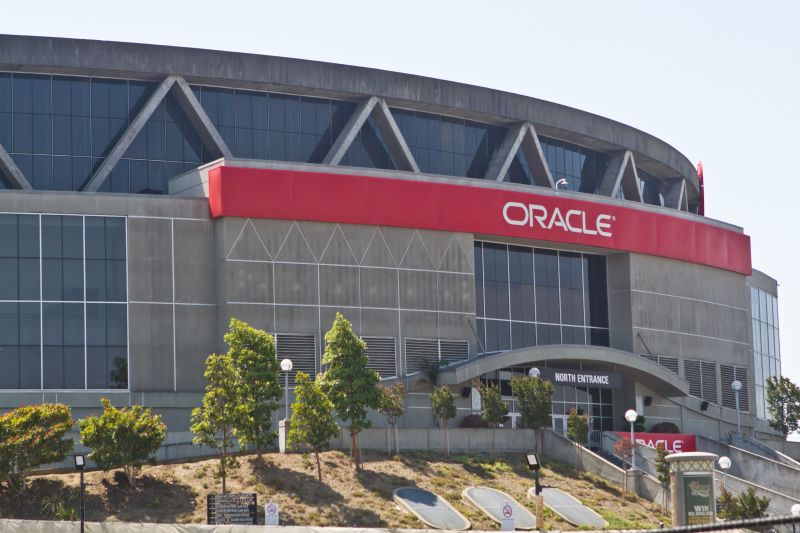 “Venue owners get access to real-time data dashboards that enhance their operational precision and control,” VenueNext told VentureBeat. It also “opens up new revenue opportunities and cost savings over time….venue owners get access to data insights and analytics on fan behavior, alongside unprecedented real-time control of its operational systems such as food inventory, parking spots, and ticket scans.”

Behind the scenes, Lauer and Brusilovsky shared that the team is using data in other ways, specifically to monitor the players’ health. The Warriors are using services like Catapult and Athos to help players perform better. This involves the use of sensors to help track a player’s heart rate, loads, and other metrics to determine their physical and physiological condition.

With a bench this deep, it’s not surprising that the team is tech friendly. But like most things, it’s not going to make a difference if you can’t sell to your customers. At the end of the day, it’s about that fan experience. “You have to connect on an emotional level,” Lauer explained. “First connect with the heart, and then the wallet.”

At the beginning of the 2015 season, the Warriors unveiled a campaign called “Strength in Numbers.” It was intended as a rallying cry for fans as they cheered their team along the road to the championship. What was surprising to Lauer and the rest of the Warriors team was how strong a beacon it would prove to be.

Throughout the year, Lauer, Brusilovsky, and the rest of the front office looked at ways to keep “Strength in Numbers” alive by engaging the team, fans, local businesses, and the broader community. It’s important to also note the success of the team’s social media efforts, such as Vines of Stephen Curry’s simultaneous dribbling of two basketballs. Brusilovsky said that these moments arise naturally and are not orchestrated specifically for the campaign.

When you think about the tech the team has deployed, including the sites, social media profiles, apps, sensors, videos, and other content, it all boils down to one emotional appeal: This is your team and the voice of thousands can help them win.

Now that the Warriors have won a championship under that banner, Lauer teased that the team is in a unique situation: How can you take advantage of last season’s win and how do you tell a story to create “rolling thunder” leading up to the Warriors’ move to San Francisco in the next two years?

I suppose we’ll find out on October 27 when the 2015-16 NBA season begins and the Warriors championship year commences.