There is no doubt that Instagram is a phenomenon.

The social network has grown from nothing in 2010 to a user base that now boasts 400 million people worldwide, 77 million of whom are in the U.S.

80 million photos are shared daily on the image-centric social network, providing constant joy to those of us who love a good plane wing, hot dogs/legs paradox, or a cat wearing glasses.

But something changed on September 27th, 2015 that has left a bitter taste in the mouth of many a budding Trey Ratcliff.

That something was no doubt driven by Facebook’s need to monetize the network it acquired for $1 billion in 2012.

The frequency of advertisements — or “sponsored images” if you prefer — seen in the average stream appeared to dramatically increase. This change in cadence was — probably not coincidentally — followed by the expansion of Instagram ads to 30 new countries. 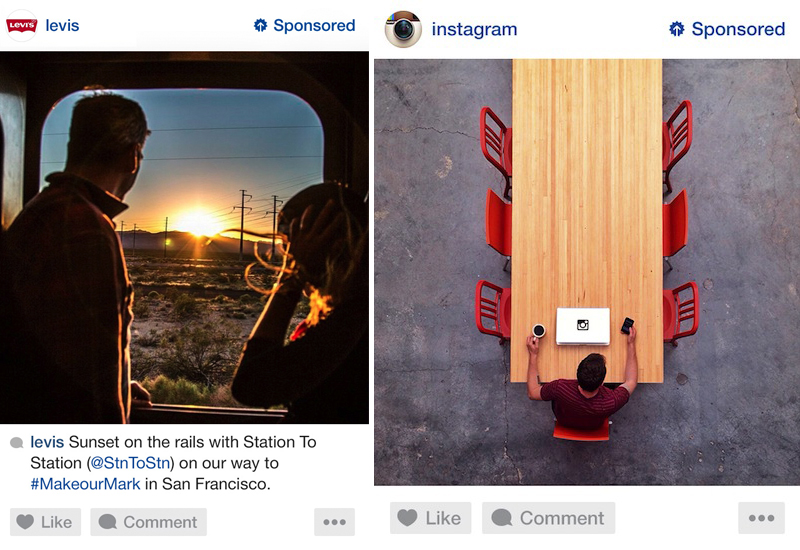 I first noticed it in my own Instagram stream. Instead of seeing an advertisement two or three times per session, I started seeing an ad every five to six photos.

A session for me would last around 20 minutes, so going from an ad every ten minutes to several every two minutes made a big impact on my experience, and, like any good social media complainer (read: “grumpy old man”) I headed straight to Twitter to announce my disgust. I didn’t get a response from Instagram, but since I know that big brands ignore 289 million social media complaints every year, I wasn’t expecting one.

But a sample size of one Instagram user is not statistically significant.

974 Instagram users, however, would be a significant sample. Against a population of 77 million, that sample would offer me 99 percent certainty with a margin of error of just 4.13 percent.

So, in partnership with Survata, I asked a few questions of 974 Instagram users during the week that followed the increase in ad frequency.

Let me preface the results by saying, I love Instagram, and like many of our respondents, I use it as my social networking app of choice.

Partly, that’s because I know the experience is fairly authentic. As I explained in my 18,000-word study of social media management tools, Instagram is one of the few services that doesn’t allow posting via its API. This means that when I view a photo, I know the user (which could be a brand I follow) has had to take or upload that image manually.

Yes, the API does offer some degradation of the experience, especially when I receive likes and followers that are clearly doing so by automatically monitoring keywords. But blocking spam is an easy task, as is reporting offenders.

Alongside Instagram, I use the official Twitter app, and I’ve recently started producing Snapchat stories. Facebook’s app doesn’t feature on my phone, and it appears — according to our respondents — that I’m not alone. Despite the social network’s massive 1.5 billion monthly active users, the first results from my survey tell me that Instagram appeals to a different demographic.

In our survey, we see that only 73 percent of Instagram users also use the Facebook mobile app regularly, despite having an audience nearly four times bigger to draw from. Around 40 percent use Snapchat, and just under 40 percent use Twitter. Fewer still use the Pinterest app on their mobile devices, and the low ‘other’ score helps to ratify that these results aren’t massively skewed. 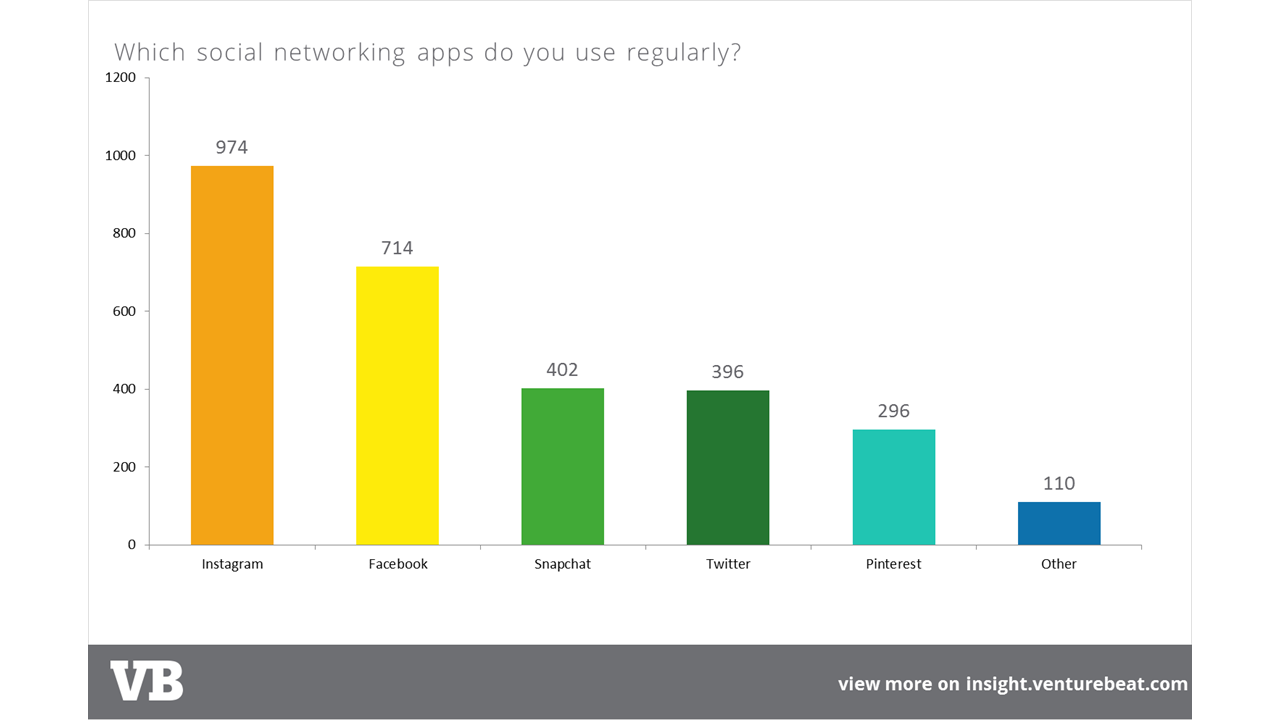 This tells us that Instagram users are fairly loyal to the app, and that the majority use it as their primary social network.

We then asked these Instagram users whether they felt that the service made it clear when they are viewing an advertisement.

While a small percentage (19 percent) weren’t sure, Instagram is clearly doing a good job of labeling ads in the stream for almost 60 percent of users. 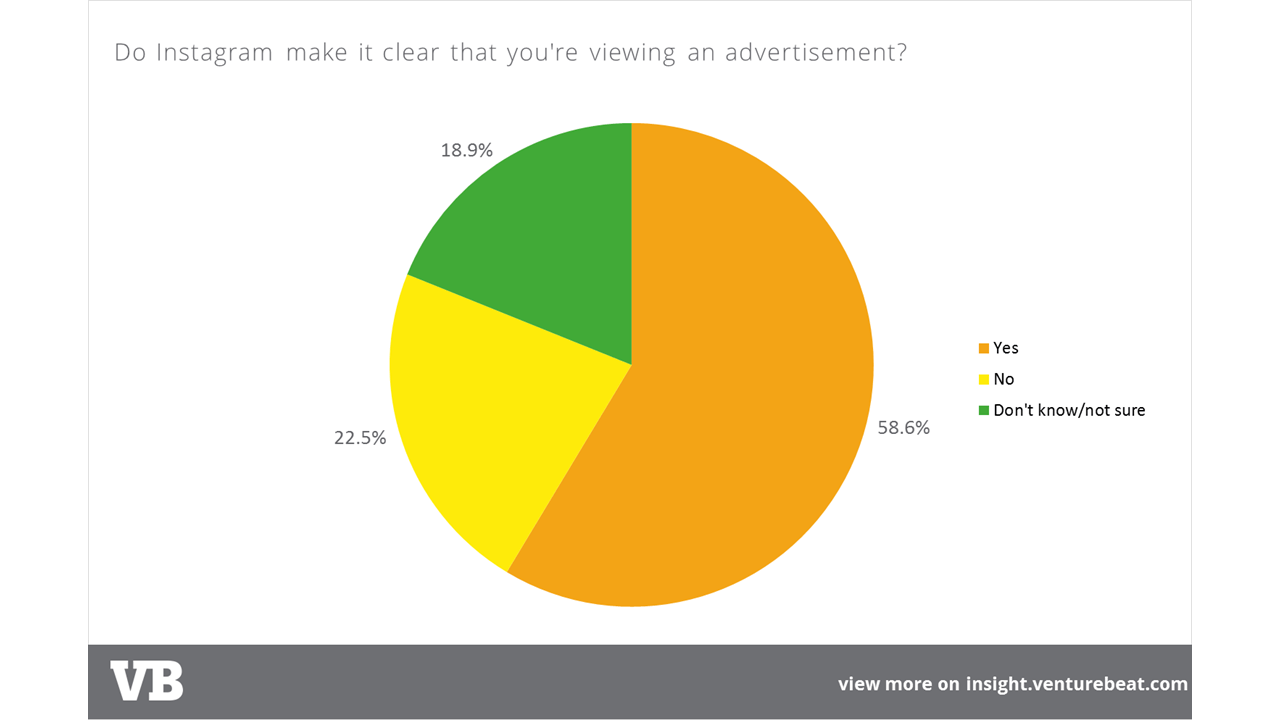 So was I alone in noticing an increase in ad cadence?

Before I could answer that question with any sense of authority, I needed to know how long each respondent spends inside the app. Questions about perceived ad frequency are reasonable to ask of a user who spends an hour per day in the app, but not so fair for someone who spends just a few minutes checking out their friends’ four-inch-wide #nofilter sunsets every month.

The first interesting data point from this qualifying question is that our respondents spend 31 minutes per day, on average, inside Instagram. That’s a big increase over the previously reported figure, which last year suggested that Instagram users spend an average of 21 minutes inside the app each day.

So now the bad news.

These changes have made a big difference in how people feel about ads within the Instagram app. And by big, I mean huge. But huge is subjective, so let me quantify that for you.

Before the new frequency, just under a third of daily users were happy with the level of ads, a third didn’t care, and just over a third hated it. 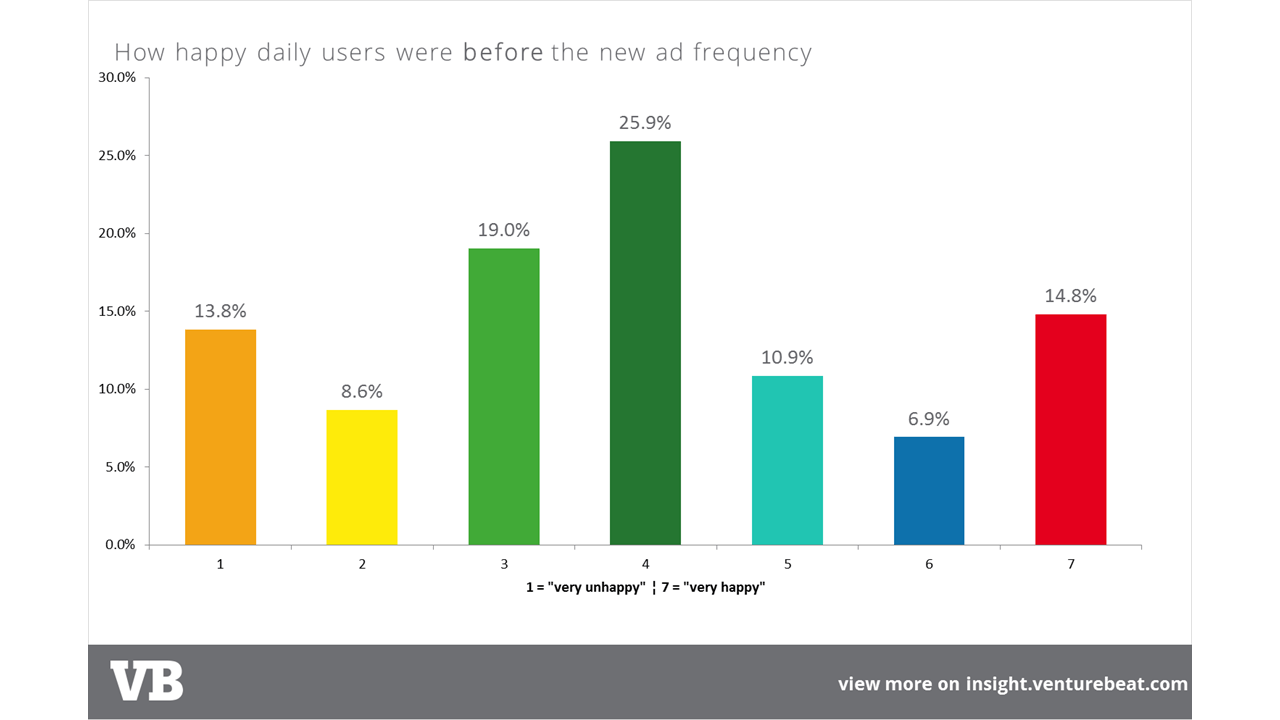 Instagram’s early users were always resistant to ads coming into the stream, so it wasn’t surprising that a slight majority still felt bad about them.

Now, six out of ten daily Instagram users are unhappy. 58.3 percent of the very people that help make Instagram what it is — the raving fans that use it daily — have turned to the dark side. 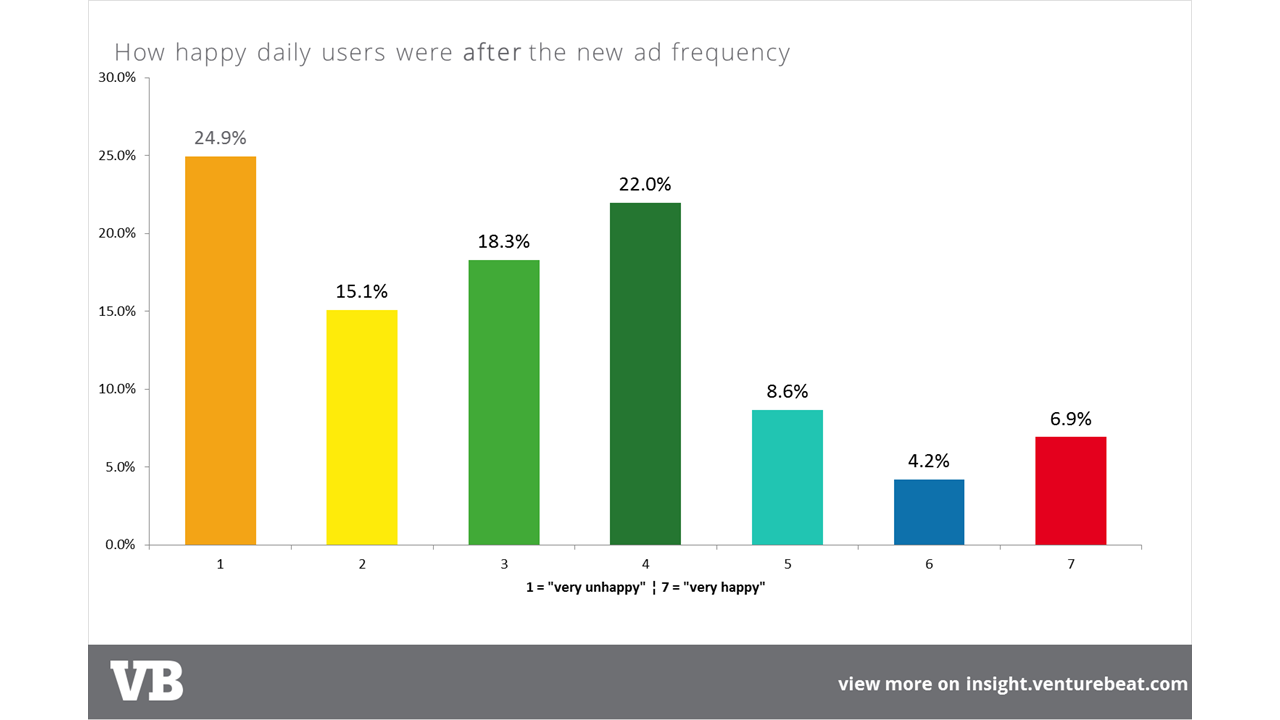 “One-star” responses alone grew by over 180 percent, and “five-star” experiences are now under half what they were before the new cadence came into play.

Any social network, especially one known for providing an authentic experience, is bound to generate negative sentiment whenever it injects ads. But this huge shift in how people feel about Instagram ads suggests the current balance is hurting its users. It is too early to investigate app data to determine if the change is having an effect on Instagram’s growth rate.

Whether the changes in ad frequency are permanent or not, I can’t say. We marketers are known for trying experiments, measuring the response, and making incremental improvements based on what we see. And despite requests, nobody from Instagram made themselves available to comment on the results of the survey, so I can’t offer any feedback direct from the horse’s mouth.

Naturally, Facebook needs to leverage the network and get a return on its significant investment, so it is no surprise that the number of ads seen in the stream is increasing. Other marketing technology experts are already rallying marketers to use Instagram now while ad competition is low. And I can tell you that marketers have reacted positively to the expansion of Instagram’s sponsored image platform — early adopters that I’ve spoken to are seeing good early results.

But for now, despite all the good news and loyalty to the app illustrated in this survey and the positive reaction from the marketing community, the Instagrammers themselves are definitely restless. And I can say that with a high level of statistical certainty.