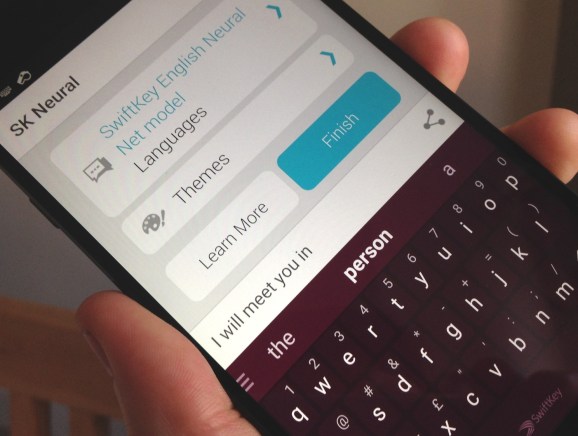 SwiftKey has launched a new experimental version of its popular mobile keyboard app, one that could significantly improve the accuracy of predictive typing.

The SwiftKey Neural Alpha app is an Android-only affair for now and, as its name suggests, it’s still an early stage product so may be prone to bugs. But it’s for this reason that the London-based company elected to launch a separate, standalone app rather than integrate the features into its existing flagship app.

If you’re new to SwiftKey, the app developed a solid reputation on Android over a number of years, replacing the default keyboard app on phones and tablets. It learns your writing style over time to speed up typing, and even predicts the next word before you’ve started typing it — this is partly based on historical patterns, but it also scans texts from a myriad of sources to “learn” popular orders in which words are placed. SwiftKey finally launched for iOS last year.

The new SwiftKey Neural app uses artificial neural networks (ANNs) to predict and correct language. ANNs represent part of the broader field of machine learning and artificial intelligence, and is more directly based on the structure and workings of the human brain. This is in contrast to SwiftKey’s existing n-gram model, which relates to probability and computational linguistics.

While n-gram technology does give accurate predictions for common phrases, there are inherent restrictions. It doesn’t look at the actual meaning of words — it can only accurately predict words it has seen before in a set sequence. Neural networks bring more of a human element to the mix, and can look at the meaning of what you’re typing to deliver better predictions.

“It [neural networks] gives the ability for SwiftKey to predict and suggest words in a way that’s more meaningful and more like how language is actually used by people,” said SwiftKey chief marketing officer Joe Braidwood in an interview with VentureBeat.

Though it’s early days, this signals a notable step forward for mobile typing, and could lead to more meaningful, context-specific suggestions. Here’s a look at some examples of how the neural incarnation of SwiftKey can improve the app’s ability to second-guess what you want to type.

Though this represents the first time such technology has been implemented in a keyboard app, Google recently dabbled with neural networks in an update to the Google Translate app. The refresh brought in real-time visual translation (e.g., of signs) in 20 more languages, made possible by convolutional neural networks.

For SwiftKey and its millions-strong band of merry typers, neural networks promise to bring faster, more accurate typing regardless of what it has already learned from your language use and other texts. “It’ll know you so well, it will accurately predict your entire sentences, in your tone of voice, based on the situations that you’re in,” the company said.

Last year, news emerged that SwiftKey was working with esteemed physicist Stephen Hawking to help him communicate twice as fast. Indeed, SwiftKey had been working away behind the scenes for two years with Hawking to develop technology specifically for him — the system learns from Hawking and predicts the characters and words he plans to type next based on historical patterns.

With the company’s neural network technology now coming to the fore, we can get a better look at some of the artificial intelligence research that goes on behind the scenes at SwiftKey.