Earlier today, Dell officially announced that it plans to acquire data storage giant EMC in a deal worth $67 billion. To say that the deal is big would be something of an understatement — it is the single largest tech-only acquisition of all time, and worth more than the next four acquisitions combined.

While AOL’s $106 billion purchase of Time Warner back in 2001 was a bigger deal, many would exclude that from comparison given that Time Warner wasn’t really a technology company per se at the time. So here’s the next five biggest tech-only acquisitions after Dell and EMC, though these haven’t been adjusted for inflation. 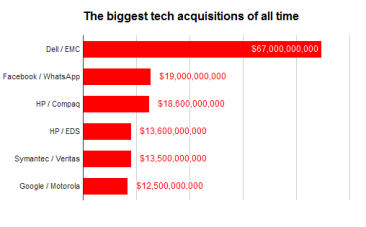 In 2014, Facebook made an eye-watering $19 billion purchase of messaging giant WhatsApp, a deal that led many to predict an impending dotcom bubble burst v2.0, though WhatsApp continues to go from strength to strength, as does Facebook.

In 2002, U.S. computing giant Hewlett-Packard shelled out $18.6 billion in a merger with Compaq. The deal was delayed after Walter Hewlett initially tried to block the deal from happening, but it was finally green-lighted by shareholders.

Six years after sealing the Compaq deal, HP snapped up Electronic Data Systems (EDS) in a deal worth $13.6 billion. The move ramped up HP’s credentials as a serious rival to IBM in IT services.

In 2014, online security company Symantec bought utility computing company Veritas in an all-stock deal worth $13.5 billion. Two months ago, news emerged that the Carlyle Group was buying the Veritas unit from Symantec for $8 billion.

In late 2011, Google revealed it was buying Motorola Mobility, Motorola’s mobile device arm — for $12.5 billion. It then sold the arm for less than $3 billion last year, though it retained most of the company’s key patents.