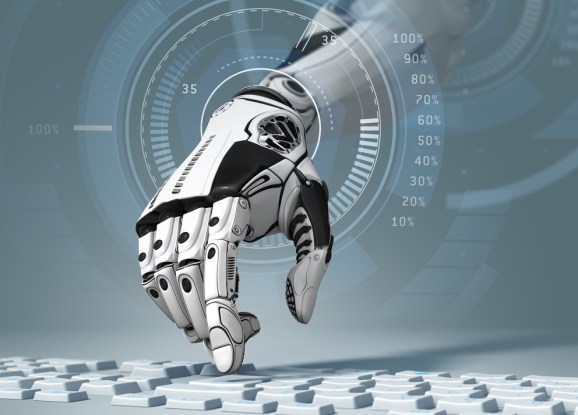 For years, the search engine optimization industry has been dominated by Google’s algorithm update. Each time marketers would hear a term like Panda, Pigeon or “Mobilegeddon“, they knew exactly what it meant: a thorough audit of their current website along with a number of improvements necessary to prevent a precarious drop in ranking.

But increasingly, a sentiment is starting to grow that we’re entering a brave new world in SEO, one that may lead to search engine optimization in which the modus operandi looks nothing like it has before. Machine learning has entered the field, and it comes with the potential to overhaul everything we know about the importance of algorithm updates to SEO.

Machine Learning? As in, Robots Who Are Taking Over?

Well, yes and no. Machine learning, as you might be able to infer from the term, refers to the science of getting computers to act without being explicitly programmed.

No, Google’s SEO algorithm will not soon rule our world and become a machine overlord (although considering how much we as a society rely on search engines, you could argue that’s already happening). But for Google, machine learning would mean an algorithm that does not need to be updated manually in order to adjust and keep showing the most relevant results possible.

We’re not there yet. As of today, Google still relies on manual updates (the latest being an update to its Panda algorithm) to ensure relevance and avoid fraudulence in its search results. And while Google likes to infer that its algorithm is already unbeatable, there are numerous examples of old, seemingly defunct methods of SEO still working.

In fact, the company still requires an army of human quality assurance workers to make sure it’s working the way it should be working.

But we now know that the search engine giant is officially researching machine learning possibilities. And taking the human element out of the equation could have wide-reaching consequences for digital marketers everywhere.

How Machine Learning Will Impact SEO

Above all, a search algorithm that learns and updates itself automatically would mean fewer updates that throw the digital marketing world into turmoil.

Just imagine what would have happened if Google’s “Mobilegeddon” update earlier this year, which had marketers everywhere panicking and making sure their websites were compliant with Google’s mobile-friendliness standards, had happened without a prior or point-in-time announcement of intent by the search engine.

On April 21, 2015, marketers would still have seen websites that weren’t responsive or mobile friendly ranked lower on mobile searches. And over time, we’re confident that they would have adjusted to the same degree as they did with the announcement. But the panic we witnessed before, during, and shortly after that date would simply have been non-existent.

At the same time, in a machine learning environment, Google engineers themselves would not be the authority figures they are today. While noted insiders like John Mueller would clearly remain authority figures, they might not be able to gain traction as easily with specific warnings about practices like link building.

Keeping all of that in mind, just what would a Google move toward machine learning mean for your SEO efforts? Ideally, it would mean a continuation of a strategy you have already begun.

For a while now, I have argued the importance of high-quality, relevant content in addition to technical SEO requirements. Don’t get me wrong; some technical specifications, like an SEO-friendly title and code along with site-loading speed and the above-mentioned mobile-friendliness, remain as important as they’ve always been. But without content that is both relevant and clearly knowledgeable, adhering to those technical specs will not be enough to increase your Google rankings.

And we’re not the only ones with that view. Studies showing the importance of quality content and user-friendliness continue to multiply, including this one featured on MarketingProfs, highlighting comprehensive content and user experience as major ranking factors in 2015.

But the study goes beyond those points. As MarketingProfs notes in its analysis of the report:

The correlation between keywords and high search rankings has decreased across the board. More and more high-ranking sites are not using the corresponding target keyword in the body, description, or links, the analysis found. Sites are also using keywords less in URLs themselves, with only 6 percent doing so in the 2015 study.

Keywords, of course, have long been a crutch for SEO marketers looking to rank for specific terms and phrases. In a way, Google algorithm updates are a similar crutch for marketers, alerting them to just what they should do in order to make sure their website is found.

If machine learning does away with major algorithm updates, marketers lose this crucial crutch. What they gain instead is what Google has always wanted: an opportunity to make their content and user experience speak for itself.

Have you ever wondered why Google keeps pumping out updates to Panda, Pigeon, and other animals? Contrary to popular belief, it’s not just to spite marketers. Instead, it’s a way for the search engine to keep its dominant market share, ensuring that its users continue to find the most relevant content for their needs as easily as possible. Every algorithm update is designed to achieve this single goal. We have to remember that Google is not in the business of keeping companies happy with their search rankings. Instead, it services the end user, and everything it implements is for the user’s benefit.

Apple Throwing its Hat into the Ring

It’s been common knowledge for a while now that Apple has been developing its own search engine to directly compete with Google. And while Bing and others have faltered in their attempts to dethrone Google, or at least carve out a decent piece of the market, Apple has something that all the other competitors don’t: hundreds of millions of people using its devices.

And the general consensus on Apple’s search algorithm is that it’s focusing on the user above all else, even above monetization. After all, the algorithm will be running on a device that Apple already makes a massive profit on. And this is a massive “f*&k you” to Google, since Google’s entire business model is built on having to monetize its search results.

So, not only will the machine learning race cause a huge shakeup in the way search results are being delivered, it could also have a major impact on the search engine market and which companies are the players.

So what do you do with all of this information? You design a website with high-quality content that your users want to seek out and share among their peers. Whether a machine learning SEO world is upon us or still in the future, that strategy will never change.

Mike Templeman is the CEO of Foxtail Marketing, a digital-content marketing firm specializing in B2B lead generation and lead optimization. He is passionate about tech, marketing, and startups. When not tapping away at his keyboard, he can be found spending time with his kids.