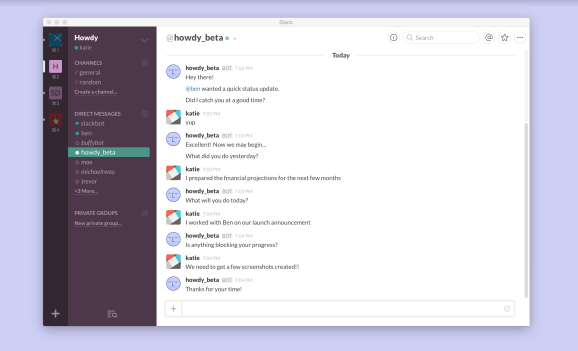 Startup Howdy has built a bot (software that runs automated tasks) for team-communication app Slack that can run virtual meetings, and is launching today with $1.5 million in seed funding.

The bot — a digital personality that works sort of like SmarterChild on AIM — can ask team members for updates via direct messages, aggregate the results to get everyone on the same page in public channels, and learn new questions to ask team members. Over time Howdy’s bots could very well end up automatically taking care of more tasks, like kicking off continuous-integration builds for developers, but for now, it’s meant to save time otherwise spent in meetings with coworkers.

“Meeting culture is terrible,” Howdy cofounder and chief executive Ben Brown told VentureBeat in an interview… Everybody comes into the room and talks for three minutes each about the same thing and then they leave. No document has been created, and no information has actually been captured. You do this every day. You’re spending two and a half hours a week and not getting a whole lot out of it. We think this is a great opportunity to apply automation.”

Rather than establish a reserved place on the Internet to hold meetings, Howdy has chosen to build within Slack, which now has more than 1.25 million daily active users. Other Slack bots have emerged in the past several months, too: Chatterbug for issue tracking, Nestor for ordering an Uber, Slack enhancement bot Awesome, and calendar scheduling bot Meekan.

Savvy admins could probably build their own IRC bots, but Howdy, which is a piece of cloud software, is easy to set up and use, Brown said.

Howdy started earlier this year and is based in Austin, Texas. The startup now employs five people, including Brown and his wife, Katie Spence, who previously founded the software development firm XOXCO. Novelist Neal Pollack is working with the startup to “develop a character for the bot,” Brown said.

Companies can sign up for Howdy on Slack, starting today.