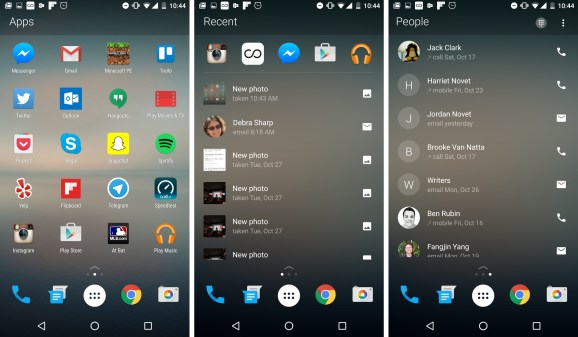 The Microsoft Arrow launcher for Android.

Microsoft today made its free Android launcher, Arrow, available for download on the Google Play Store. Previously the app was available in a private beta.

Microsoft seems to have high hopes for it.

“Arrow … is the simple, personal launcher for Android that offers a radical simplification of the Android experience,” Microsoft said in the description of the app in the Play Store.

Arrow is the latest mobile app out of the Microsoft Garage, which occasionally releases experimental projects. Other recent ones include note-taking app Parchi (not available in the U.S.), photo-sharing app Twist, opinion-gathering app Tossup, and email app Send.

You can use Microsoft’s Arrow as an alternative to the default Google Now Launcher.

When you open Arrow for the first time, it figures out your “top” apps, and then it asks you to select at least five of your most used apps. Then it goes to work arranging everything. Arrow claims to get smarter over time.

The launcher does not replace the apps in the bottom row of the screen. But Arrow does provide a fresh interface for all apps and widgets when you tap the center icon at the bottom of the home screen.

Perhaps the most useful part of Arrow is the Recent screen, which brings together emails, photos, and calls.

What’s annoying is that Google Now isn’t available if you swipe left from the home screen, and not only that — the Google search bar at the top of the home screen is absent in Arrow.

More simple apps for upgrading Android could very well be coming out of Microsoft. The tech giant recently acquired Double Labs, the startup behind the Echo Notification Lockscreen app. And earlier today, Microsoft said it will use the Sunrise technology to improve the calendar functionality for Outlook on Android. Meanwhile, Microsoft has also been working with startup Cyanogen, which offers mobile devices running an Android-based operating system.